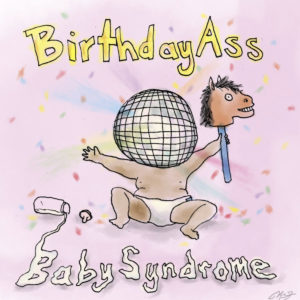 A baby wearing a disco ball on its head as album art doesn’t exactly give a clear idea what the album Baby Syndrome by Birthday Ass may be about. And that’s fitting because it is certainly difficult to describe the experimental Boston band upon first discovery. The playfulness of the horse toy, the excitement of the disco ball, the defined mess of the spilled milk. It doesn’t make sense, yet it works, and that’s what makes it so beautiful.

Baby Syndrome is a colorful adventure filled with intriguing, eclectic characters. These characters sporadically inject sounds of jazz, indie rock, ska, and more. To try and box this six-piece band, you would need more boxes than college move in/move out day in Boston. The band’s high energy is contrasted with smooth, harmonizing instrumentals and vocals.

This animated ship is steered by Priya Carlberg, who is the singer and also the writer of all the lyrics and music arrangements. Her voice is angelic, but it’s powerful enough to pierce through melodic brass riffs with lyrics like “don’t you fucking take my French fries.” In those instances, the band’s identity is defined. They provide the desire to dance as you stumble into appreciation. On songs like “Pidge,” you want to dance to the giddiness of the instrumental melodies, while smiling to the looping lyrics of “flying / dying.” On songs like “Bobsquid,” you want to slow dance into an emotional void, but also dive into the simple story and tragedy of the pleasant squid, Bobsquid. These moments are packed into these short songs and can cause whiplash. But it’s the type of whiplash you get when having a good time at a friend’s birthday party.

The chemistry of the group plays a key factor in the track’s arrangements. The group’s improvisations are strong, and at times jazz oriented but the  way all of the instruments bounce off of each other would make it seem that these talented instrumentalists are synced on another level. The way Priya fights for space with her style of lyricism within the band is the same way guitarist Andres Abenante mixes his smooth, melodic guitar work against the trumpet riffs of Alex Quinn and saxophone playing of Raef Sengupta.

The band is a product of the New England Conservatory and also released this debut album of theirs on a local record label called ERASED! Tapes, who have produced records from the likes of sundog and Kevin Wynd — they are in good company! Baby Syndrome is available digitally and on cassette through ERASED! Tapes. 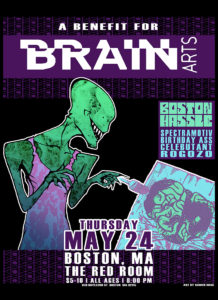