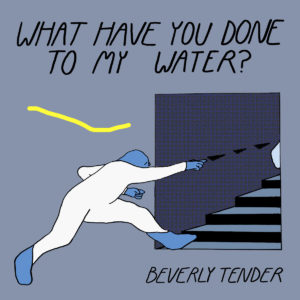 Beverly Tender tricked me. Looking at their self-described genre of dog-rock and song titles like “Any! Moment! Now! Yeah! (AM(n)Y!),” I expected some fun indie pop. Disarmed, I put on What Have You Done To My Water? and felt “Theme from Beverly Blender” hit me like a speedy truck turning a corner. Ow. Though there are some elements of lighter styles like twee, the noisy samples and post-hardcore influences are undeniably at the forefront. Each song looks through a lens of worry, sounding forlorn in its often uneasy atmosphere.

The opener, “Theme from Beverly Blender,” ends with the interrupted, “Tripping on a step at the bar where I lost my-,” while the song ends abruptly. The ending of Theme implies that the singer has become too flustered to go on. Later on, “Taxidermy Horse” is cut into two distinct parts, separated by a noisy middle section. When the more-structured latter surfaces from the noise with, “lost your bearings at a stepped bar. Caught yourself on the dusty counter top,” you get the sense of slight recovery. At least enough to finish one of the album’s first thoughts. This is one of the more affecting times that What Have You Done calls back to its own songs lyrically. Other recurring ideas like animals swallowing things and water dripping (in the form of sweat or otherwise) pop up from track to track.

My favorite song on the album is the closer, “Big Snake Song.” Singer Molly Hastings recalls a time that Judith the snake ate a mouse, and the subsequent mailing of the snakeskin to Judith’s owner’s grandmother. Molly evokes her emo influences in her vocal delivery, giving the song’s story a shot of nervous energy. There are subtle touches of twee in the track that were hard to pinpoint at first, as the album’s constantly looming gloom of post-hardcore seems to come to a head on “Big Snake Song.” I’ve had this track on repeat (really) all week, and I can’t get enough of the shift in energy. It has both the album’s most intense moment – “You told her it was in the mail already. The guilt overwhelms.” – and the most soothing – the relief felt by the ethereal guitar and the satisfyingly cool drumming in the album’s last minute.

What Have You Done To My Water? is highly replayable. It’s richly detailed in everything from the smart song structures to the angular guitar riffs to the varied vocal delivery. Listen to it a million times here:

Tags: Beverly Tender, disposable america, Providence, What Have You Done To My Water