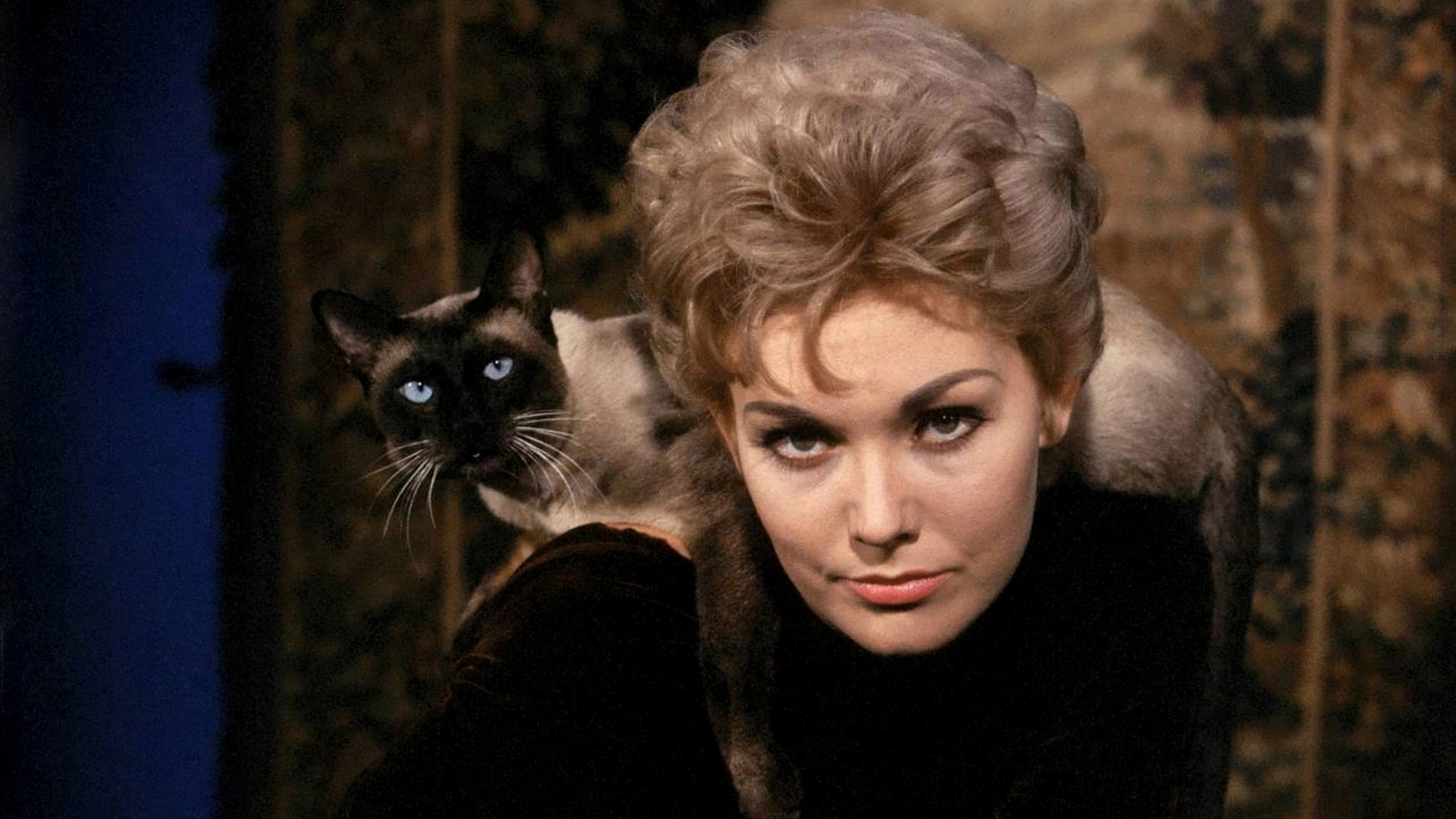 When writing about a repertory screening, I usually try to at least pay lip service to a certain measure of scholarly detachment. I’ll describe the plot, offer some points of comparison to better-known films, and, while I’ll express my enthusiasm (or lack thereof) for the film’s merits, I’ll generally try to keep a voice of reasoned criticism.

In this case, however, I will dispense with the formalities and show my hand at the outset: my girlfriend and I named our cat after Kim Novak’s pet and familiar in Bell Book and Candle. As such, I can make no pretense of objectivity towards this film. I love this movie, and you’re all going to have to deal with that for the rest of this article. 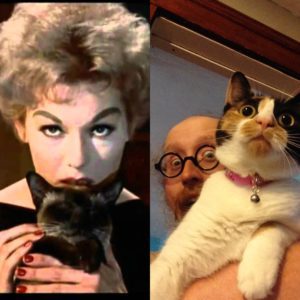 Anyway, with that out of the way, here’s the part where I tell you what the movie is actually about. The aforementioned Ms. Novak plays Gil Holroyd, proprietress of an exotic curio shop and practicing witch. Gil spends most of her time in a swanky Greenwich Village jazz club called the Zodiac with her aunt Queenie (Elsa Lanchester) and brother Nicky (Jack Lemmon). In this world, it seems witches live by strict rules: they can neither cry nor fall in love without immediately being stripped of their powers. Gil, however, is growing weary of her witchy lifestyle, so she uses her powers to charm her upstairs neighbor Shep (Jimmy Stewart, at his most Jimmy Stewarty). Predictably, they hit it off better than Gil ever imagined, and soon she finds herself torn between her life of sorcery and something more traditional.

If I sound like I’m brushing off the plot, it’s because it’s pretty much what you would expect, and largely incidental to what I love about this movie. This is a classic example of what Quentin Tarantino calls “a hangout movie,” which you watch (and rewatch) to spend time in this world with these characters. To me, nothing sounds more appealing than being in a ‘50s beatnik coven, listening to jazz and watching performance art in an astrology-themed neon Village speakeasy. As you can imagine from the list above, the performances are uniformly terrific, and the actors seem to be having a ball with their characters (I haven’t even gotten to oddball paranormal author Sidney Redlitch, played by oddball television pioneer Ernie Kovacs, or Supreme-like upstate witch Bianca de Passe, played by the perfectly named Hermoine Gingold). And of course there’s Pyewacket, Gil’s loyal familiar, who seems less than thrilled to be in the movie but manages to steal every scene he’s in. 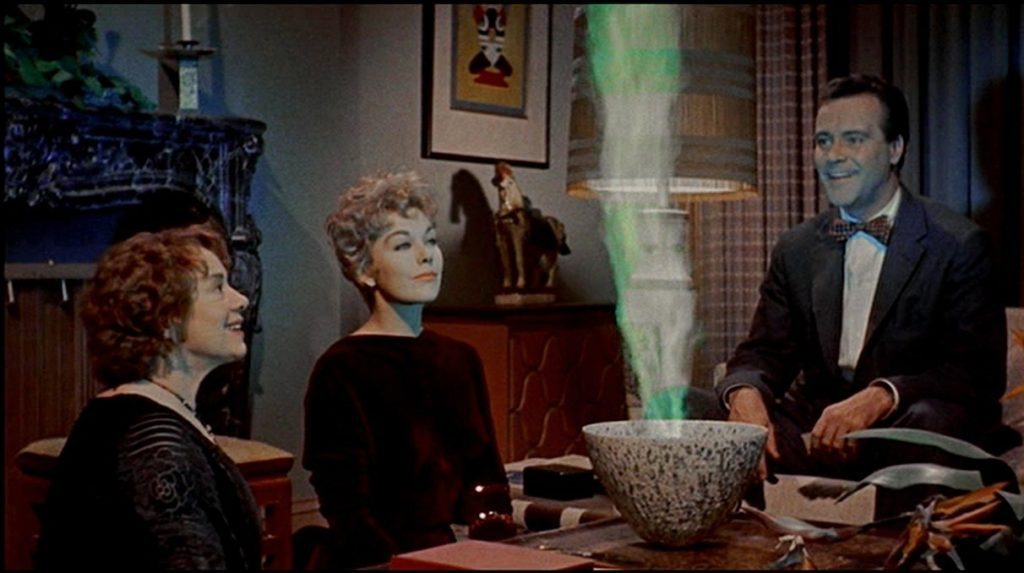 For all its silliness, Bell Book and Candle has proven to be surprisingly influential. Like Rene Clair’s screwball I Married a Witch, Bell Book and Candle falls into what Pam Grossman referred to in her lecture last night at the Brattle as the “Meddlesome Witch” genre, in which a modern witch tries to reconcile her powers into everyday life. If that sounds familiar, there’s a reason for that: Bewitched creator Sol Saks cited both films as primary influences. More than half a century later, its template still stands as the model for sassy TV witchcraft: you may recognize Elsa Lanchester’s Queenie as the namesake for Gabourey Sidibe’s character in American Horror Story: Coven.

If there is a flaw to this movie, its the ending, which it doesn’t feel like a spoiler to reveal is a traditionally “happy” one. While Novak and Stewart find contentment together, it’s hard not to feel a twinge of regret on her behalf: from today’s vantage, ‘50s domestic bliss pales in comparison to a technicolor jazz-witch nightclub. It helps that the last scenes find the entire supporting cast (including Kovacs’ Redlitch) happily sipping drinks at the Zodiac, but it still feels like a bit of a drag. Early in the film, Gil asks Queenie, “Don’t you ever wish… that you could just spend Christmas Eve in a little church somewhere, listening into carols instead of bongo drums?” With all due respect, witchcraft and bongos sound like the makings of the best Christmas ever. 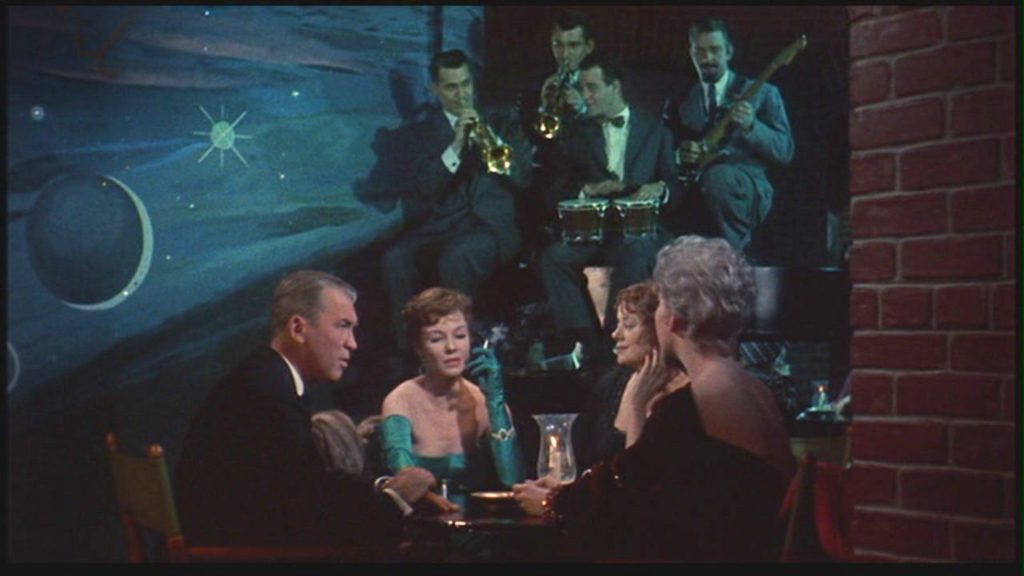 But all of this is a quibble. As I said before, I love this movie unequivocally, and its cast of weirdos, hipster-witches, and cats are very dear to my heart. For all its major studio rom-com trappings, Bell Book and Candle manages to capture a genuine spirit of countercultural subversion. Witches have always been powerful symbols of rebellion against patriarchal society, and while Gil’s coven is co-ed, there’s something refreshing about the way this group cheerfully thumbs their noses at cultural norms. The sight of Gil and her coven/family gathering under an art-deco Christmas tree, exchanging tinctures and records and turning on the lights with their minds, is far more heartwarming to me than anything on the Hallmark Channel. And while the ending may ring hollow, you can always just restart the movie and return to this freaky witch scene.

Now, if you’ll excuse me, I need to go feed my familiar.

Part of the ongoing series: Dead of Winter: Cinema of the Occult
Double feature with Season of the Witch