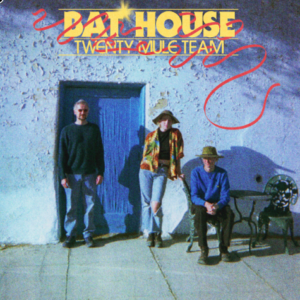 Bat House’s Twenty Mule Team is original and dreamy, yet gritty and distorted, creating an album that is bound to have any listener moving their body. Originating in Boston, the “pop-laden psych rock” band cultivates a refreshing aura on their second full-length album.

The band’s first album was the self-titled Bat House which was released in 2017, featuring their most popular song “Patterns”. Although this was released nearly five years ago, they have put out a number of singles and EPs since then. Twenty Mule Team came just in time to be the soundtrack for any listener’s spring and summer.

Twenty Mule Team perfectly reflects two adjectives the band describes itself: groovy and gritty. It has an out-of-this-world tone that permeates the soul. Bat House draws from several genres that blend together for a perfectly unique sound. The psych, electronic, and math-rock influences create wholly-original music that forces its listeners to sit back and take it all in. It’s ethereal, it’s psychedelic, and it demonstrates how the band has grown into their tone since they began their discography. This celestial energy is contrasted with the tasteful inclusion of deep and distorted vocals, making for a unique listening experience.

The album immediately punches its listener in the face with “Fuck,” adequately preparing them for the transcendent album that is to follow. While Twenty Mule Team is cohesive, each track offers something new, as shown with the moodiness of “Anger and Sex” and the dreamy grooviness of “56” that seamlessly carries on through “Cinema”. Tracks that particularly stuck out were “Watch,” “R U Afraid, and “Fat Bear.” During these songs, I found myself speechless and amazed. I was taken aback by the satisfying harmonies and Bat House’s original navigation of sound. The synths and samples sound as if they were recorded in another dimension, with hazy and sincere vocals to match. With beats pulsating so that you feel each one echo throughout your whole body, these songs are a trip that takes any listener to somewhere cosmic.

Twenty Mule Team shows how Bat House has matured over their career, both in their personal sound and production quality. It is obvious that the band has grown throughout the years, producing higher quality music as time goes on. Their early singles and first album reflect many of the otherworldly and psychedelic qualities of Twenty Mule Team, but their latest album has shown a mastery of it.

Bat House has upcoming shows in Boston and Brooklyn, at The Rockwell on 4/14 and The Sultan Room on 4/17, respectively. If you are in either area, do not miss the opportunity to lose yourself in Bat House’s groove.

Liked it? Take a second to support Emma DeLaRosa on Patreon!