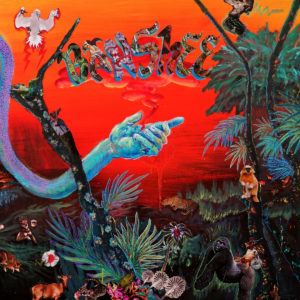 On Livin’ In The Jungle, Banshee’s brand of tribal psychedelia seems to have lifted off into another realm. As their last release was triple dipped in the best parts of heavy acid rock (MC5, Hawkwind, Stooges, Butthole Surfers… their label also suggests Killer era Alice Cooper) the new one gets a little “headier” adding an atmospheric side of psychedelia with exotic instruments (glockenspiel, strings, shakers, synths,flutes) and textures. Banshee have clearly stepped up here, building further upon their own hallucinatory vision of consciousness expansion. Summoning an ancient spirit to wreak vengeance on the world, Livin’ is equal parts intrusive and intriguing like the listener has stumbled upon a hidden, psychoactive ritual in the woods and can’t look away.

Don’t let that “headier” tag mislead you, above all this is a fun psych rock album with an abundance of swagger and primal intuitiveness from start to finish. Slithering out of the speakers with a heavy stoned groove ,”Dawn of Man” could be their own triumphant and liberating anthem or your own after you tell off that toxic person/job/inanimate object. “Savage Man” conjures up peak Black Sabbath melting from one hip shaking riff into another while “Snake Charmer”‘s chugga lagga lagga hook will burrow into your head and make a new home. Highlighting their meditative side, “Inner Circle” briefly steps away from their own hard riffage to set a hypnotic trance of self assertion repeating the title phrase as a mantra.

Is this a concept record? With ambient jungle sounds that pop up frequently, a subtly revealing cover and references to birds, snakes and savages there’s definitely a consistent theme, but ultimately who cares? Livin stands out more from their chaotic debut because it finds them focusing their raw imaginations into stronger songs. I defy anyone to sit down through this record without giving in the urge to dance. Here’s hoping for more dispatches from their collective head.