Caw! is the debut album of Boston psychedelic rock’n’roll punks Banshee – featuring members of fan favorites Male Nurses and Savageheads as well as the underrated Bombers. The self-released album opens with a a burst of psychedelic noise clatter, setting the stage for most of what is to come. The galloping drums oscillate between punk and rock’n’roll. Coupled with the swirling solos and the murky howled vocals – which often break into full-on banshee shriek – they build an atmosphere of quasi-blues hard rock by way of MC5. While The 13th Floor Elevators and Red Krayola immediately come to mind, the psychedelic rock feels more at home with the off-kilter sounds of 70s Detroit – Destroy All Monsters, for instance. Industrial undercurrents and eclectic, discordant interludes help to keep the listener from ever getting too comfortable. Caw! hits hard with a punk assertiveness but is at its best when its more sedate and atmospheric moments are allowed to grow, heightening the impact when the aggressive sonic assault breaks through. This is most evident in one of the album’s highlights, “Dance of the Dead,” where the almost poppy riff lets the psychedelia build only to periodically punctuate it with maniacal vocals and guitar swells before culminating in droning raga. Keep your eyes peeled for Banshee in the Boston area – upcoming shows include the Middle East with NYC’s Urchin on September 19th and SCATV on the October 4th. 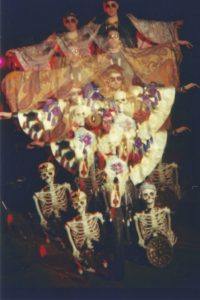