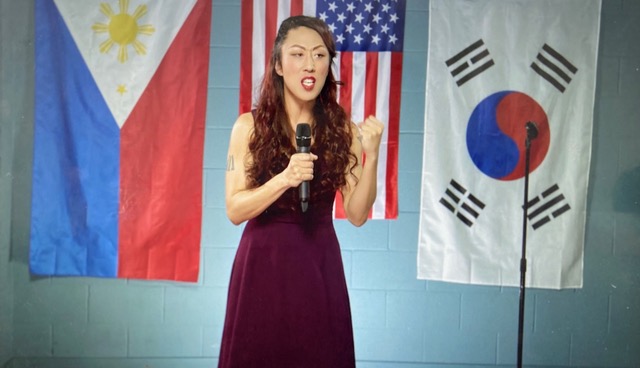 My “Tell me you were raised in a white-majority suburban town without telling me” tale was that I, a Vietnamese person, didn’t know that Miss Saigon was supposed to be about Vietnamese people. Or really, it seemed unbelievable to me that there was a huge arts production that focused on an Asian population. Though, looking back at it, it’s not a thing to applaud about. It shares the same audacity as the white man who authored Memoirs of a Geisha. Still, when I saw my high school perform this musical in my senior year and saw a character named Thuy saddened by the burdens of war and white men, it had never occurred to me that this could be about an Asian woman.

This sort of identity dissonance echoes in the stand-up comedy special Asian American – Eyz’d. Filmed in LA last year, the hour-long special features three comedians (Ana Tuazon Parsons, Nicky Endres, and Aidan Park) diving into the growing pains of living in America as an immigrant. From the absence of vocabulary needed to navigate our nuances and intersectionality to over-compensating our mental processes to fit the heteronormative crowds, the sets makes us feel like we grew up in the same town. Endres, a Korean adoptee who identifies as nonbinary, transfeminine, and genderqueer (“I’m afraid someone might look me and think I’m a minefield of trigger warnings!”), brings up the all-familiar question: “What are you?” For many people, physical presentation precedes rational consideration, especially as this question is always tailgated with, “But, really…” At least for Endres, who was an avid fan of Xena: Warrior Princess, a few fake-out karate chops and a racist stereotype had stopped their bullies from beating them up in the bathroom.

Hearing, relating, and responding to their stories must be a form of trauma bonding (and if it’s not, it should be). Parsons and Park are able to joke about their lost loved ones through tears and reflexive chuckles while Endres wades through the oft-somber lamentation of falling in love with your straight best friend. While some of the jokes trip over themselves, the comedians’ triumphs eventually come in the shape of a prom crown or a box of Lucky Charms. Reconciliation of an immigrant identity and Americanness was never going to be an easy task, but if we can laugh about it now, we must be at the right place.

Screens virtually at BAAFF on Thursday, October 21 @9:15 PM and will be available until October 24! Q&A with comedians Ana Tuazon Parsons, Nicky Endres, and Aidan Park to follow.