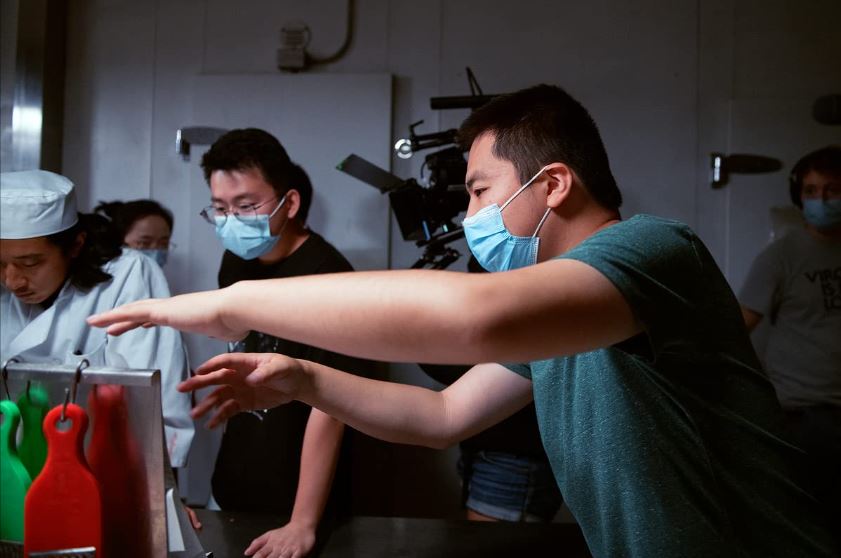 I first saw Wei-Lai in the BAAFF Shorts Program after viewing a slew of videos concerning different themes related to the AA/NHPI experience. A lot of the short films bring thoughtfulness, but watching Wei-Lai felt like a refreshing splash of cold water. The film follows Wei-Lai, a young boy who offers himself up for adoption to his friend’s family after a procedural spanking from his father. I included it in my list of favorite shorts of this year’s program; while there isn’t a twist per se (despite my rather inadequate reactionary statement as a review), there was a specific scene that perfectly encapsulates the feeling of longing as a child growing up in America with immigrant family in a shocking and comical take. I spoke with director Robin Wang, who has directed several narrative short films, including GRADUATION, a short about secrets coming to light between two Chinese families. Wang elaborates on the struggling tug-o-war for a generation growing up between two cultures.

The conversation has been edited for flow and clarity.

BOSTON HASSLE: I remember seeing your short film, Graduation, in last year’s BAAFF. It is visually different from Wei-Lai, which sort of reminds me of a sitcom episode. Were you aiming for a different tone when you were approaching Wei-Lai?

ROBIN WANG: For Wei-Lai, it’s a slightly pushed reality than in Graduation. It was taking a little bit of Wes Anderson and how he uses colors as metaphors. In the beginning, the color turquoise is mentioned as being derived from blue (writer’s note: this is part of a phrase mentioned in the beginning of the film, meaning that the next generation shall surpass the previous), which later influences the color palette of the whole movie. When Wei-Lai offers himself up for adoption for the white family, the colors are warmer. Pink, orange, yellow — they become predominant colors. When he gets back to his family, he’s bound to the yellow, cyan, and green that he was born with.

BH: I thought one of Wei-Lai’s outfits, the one with the all-cream tuxedo and bowtie, was interesting. Was there anything behind that?

RW: We were talking with the costume designer. Wei-Lai was trying to cook up the best version that he can do and make himself sellable. It’s like putting yourself on the market. I think there is a kind of realism that goes toward the Chinese family. We try to distinguish between the two families with the casting and the world building. The Chinese family is on the side of realism and carries the tone of drama, whereas the white family carries the comedy, which is more a sort of fantastical version of what life can be. The scenes with his family are more down to earth in the sense that their performances and schools of acting are even different.

BH: How did you find Arthur (the actor who plays Wei-Lai)?

RW: We basically exhausted all of LA to find the right person. We found Arthur in a Chinese child acting academy. This is the first time that Arthur acted in a movie. We were looking for child-acting agencies, but there were very limited Chinese-American actors at the right age and who look Chinese, understand a bit of Mandarin, and carry that authentic feeling for it. We stumbled upon a Chinese arts academy — not just acting, but a variety of things like music – that’s in Rosemead. We did a mass audition and Arthur made it to the top. 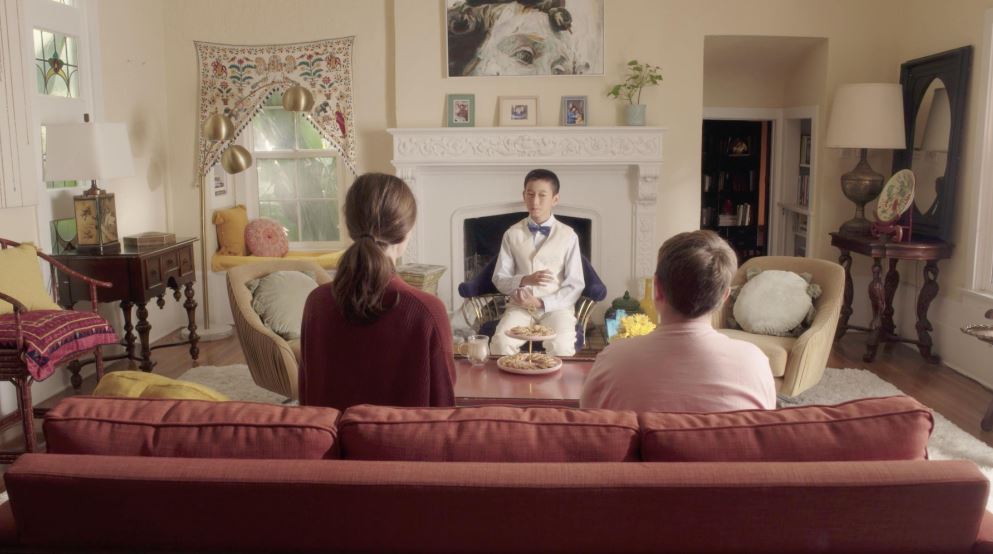 BH: What kind of character were you envisioning when you were creating Wei-Lai?

RW: The main character was going to mirror me and the writers. Like Graduation, it was going to be someone who doesn’t know how to communicate. In the case of Wei-Lai, it’s more about generational estrangement and that the world we grew up in is different. Our parents grew up in an age of diaspora — people constantly moving and crossing borders. Over time, we lost the grammar of love to speak to our parents’ generation. I think that’s the struggle that the writers and I can relate to.

When we were auditioning for the right actor, we know that child actors are sorta basically playing themselves. They have not been classically trained yet. The character is someone who develops that kind of precocious intelligence that enables him to navigate between different cultures and try to build that bridge to the Western family. At the same time, there’s a big part of him that is Chinese that he cannot extricate himself from.

One of the funny things about Wei-Lai is that he has such a strong interpersonal connection in the film. We auditioned Arthur and Benjamin (who plays Luca, his friend) at the same time. I had quietly observed how he interacted with his dad and Luca. Immediately after the callback, they started playing together. The chemistry there was natural.

BH: I don’t know much about kids, but I can see their chemistry on screen. Even their handshake at the end was kinda cute.

RW: That’s something they came up with by themselves.

BH: One thing I liked about the film was the role of the white family. They don’t have a prominent role where they were pushing their agenda, and instead were letting Wei-Lai figure what to do with his family. How did you balance their role?

RW: My goal as a filmmaker is that no one should be just strictly characterized. They should be built in a realistic and human kind of way. One of the ways I see the white family is that they think they know what’s going on but they don’t know exactly. They think like, “Oh, you know, growing pains.” They’re the kind of good-hearted white people in the community who want to help out this so-called POC problem, but they don’t really connect or relate to it on a deeper end. In the end, it’s up to Wei-Lai to return to his old family and confront and rebuild that connection that no one else in the world is able to do. I tried to use a white family in this case to mirror the reality of the world. It’s kinda funny because this was a group thesis project at USC where most of the people who co-wrote it are people of color and the people who are white were the faculty professors and advisors. They’d love to see a story about the Chinese-American and the communities of color — stories of affirmation and self love. But how exactly do we tell it? I think we have to be introspective and discover those things. 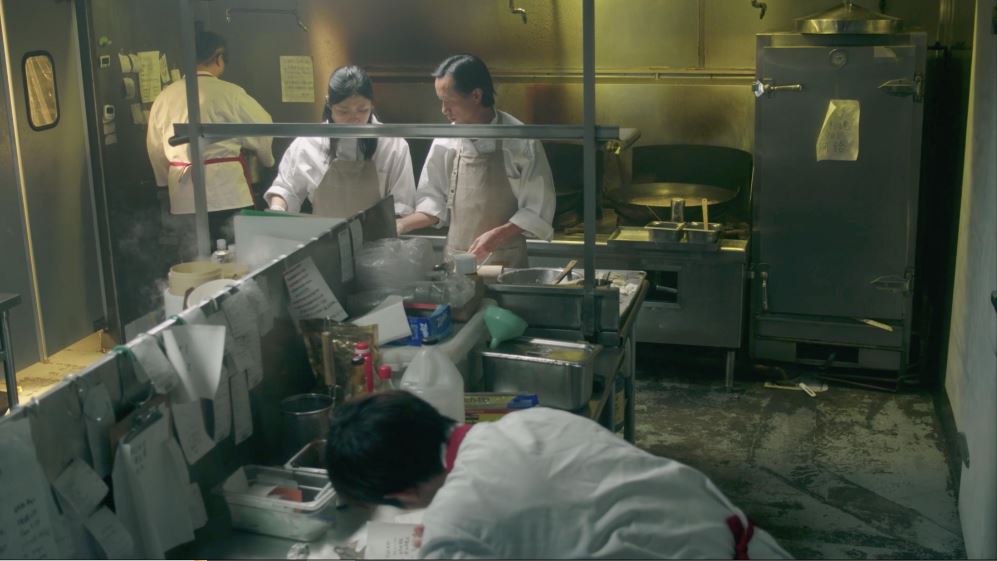 BH: Earlier in the film, the mom tells the dad that he has to conform to the way of living in America. But at the end, they don’t really talk about their feelings the way the white families do or apologize. It’s still, “Are you hungry, do you want to eat?” I wanted to ask what changed, or what did you want to show changed, between Wei-Lai and his father?

RW: The ending is inspired by my conversation with my father. What was striking to me was that every time we fought, my dad would ask me after, “What do you want to eat for dinner?” Like nothing had happened. It’s the fact that everyone has happened, but it goes back to the simplicity of life. That’s what makes us a family, no matter the ups and downs. Life still goes on. That was probably the truest answer for me because originally, there were talks in the script about the dad apologizing. But that’s just never the way Chinese or East Asian parents show their love. It’s less about words of affirmation but more by action. My parents’ love for me is in the air but they were never explicitly verbalized.

BH: Definitely. The ending is reflective of Asian families having these huge blowouts but then it’s just never addressed again.

RW: It was a similar ending in Graduation, where everything has happened and nobody talks about it.

BH: Did you make Graduation at the stage in your life when you graduated?

RW: It was inspired after undergrad from Duke. I’m currently on my last semester as USC Grad school.

RW: Thanks, I can’t wait for the real world.

BH: Do you foresee yourself continuing with the short film format or would you ever want to try the full-length narrative?

RW: The dream has always been to move to the longer form of storytelling. I’m co-directing a feature with eleven other student directors about a 1920s love story in Chicago. Then we’re going to start filming in May or June for my next film, which is funded by the Sloan Foundation. It’s about the 1910 Manchurian plague and a Chinese doctor who was Western educated but returns to his traditional community to educate people about modern science and how diseases are airborne and, in turn, developed the N-95 mask. It’s a story about homecoming and spiritual homelessness about people who are caught between two different cultures. How do we use someone who has acquired a completely different way of seeing the world come to return and speak to groups?

BH: Did you imagine doing a historical piece?

RW: Period pieces are always challenging, but I want to push my boundaries. I think I had always had a recurrent theme of exploring the meaning of home, hatred, diaspora, and displacement.