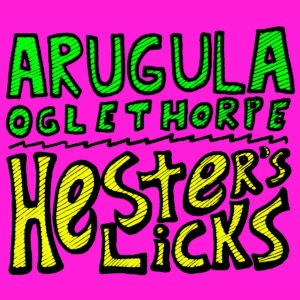 Arugula Oglethorpe, is a moniker for Boston-based Nathaniel Cowper, who is a filmmaker and improv musician by day. Additionally, Arugula is Cowper’s one-person act, for which he writes, plays, and sings everything.

The artist’s Bandcamp page encourages the listener to “LISTEN AT FULL VOLUME FOR PREMIUM EXPERIENCE”. So, slapping on headphones and turning up the volume on the new Hester’s Licks EP at a decibel that wouldn’t completely destroy my hearing or draw angry stares from my co-workers, I did.

Arugula describes the new Hester’s Licks EP as “happy, spooky, and gunky”. To achieve these sounds, the artist plays a variety of keyboards, a Fender Stratocaster, an Epiphone acoustic guitar, and more quirky instruments like the xaphoon (a sax-recorder-clarinet hybrid) and various drainpipes and pieces of scrap metal. What results from this atypical amalgamation is wonderfully weird poppy and catchy tunes rounded out with storytelling my old English professors would be proud of.

Hester’s Licks consists of 3 singles from an upcoming album and introduces martyr and prophet Mandy Maloney in the track, “Mandy Maloney Melts Into Wax”. Ms. Maloney is a poor, unfortunate soul who literally melts into a puddle on her way to work. Backed by soft lo-fi acoustic melodies, Mandy witnesses herself drip into goop (first her arms, then her torso) while being ridiculed by a group of passers-by. Sing-songy, like a children’s tune (but definitely not as inchoate), with lots of sweet-sounding rhyme, the track is a really cool distortion of an Aesop fable, altogether horrifying yet mesmerizing.

“Hazelnut Supreme” is a track that encapsulates both the sardonic lyricism and cross-genre musical oddities of both Ween and The Robot Ate Me. The first few riffs emulate something like stoner-rock, but quickly shifts into a warped synthy track mixed with xylophonic melodies. Arugula Oglethorpe’s vocal style on this one is assertive, almost mockingly so. Halfway between singing and rapping, Cowper speaks the lyrics:

Arugula Oglethorpe continues to poke fun at American culture throughout the track, and at one point equates the President’s Oval Office to (what I interpret to be) extreme sexual arousal from some form of teriyaki-flavored meat:

“Wooddreamhead” rounds out the EP, and is another lo-fi poppy tune that seamlessly switches styles in the midst of imagist lyricism. The cryptic lyric “Nothing was never anywhere/But not all things were nowhere/All the time” is one of many mysteries in this track, and hooks in the listener, who’s eagerly vying for answers. In keeping with the character theme, Arugula Oglethorpe introduces two new characters in this track: Hester and Jerome, a seemingly lackadaisical fellow. Hopefully Hester, Jerome, and Mandy will make appearances in future tracks of the upcoming album—its the least we could have if not a TV show.