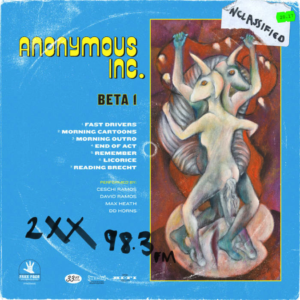 I don’t have any idea when it was that prog rock became cool again, but it did. With shredders like Speedy Ortiz and Bent Knee, along with many other names, complicated, hard hitting music seems to be revitalized in the indie music scene. I guess it is less “Prog Rock”, and more “musicians doing whatever the hell they want”, but by god these players can play. In a slightly different stratosphere of sound, Anonymous Inc has been doing their thing for almost 20 years, combining textured landscapes, hip hop, pounding jazz constellations and even a shoegaze-ey styled post rock to make the most unique release I have heard in years: Beta-1.

Beta-1 is a treasure. In a world looking for its fix of nostalgia and often given facsimiles and “retro-styled” bands, many of these tracks were actually recorded between 2001 and 2007, but can easily hold their own today and feel more modern and up to date than many bands making the rounds this year. They apparently hid somewhere like a sleeping, cosmic, beautiful truth while various members worked on other projects, fulfilling other parts of themselves. Dug up and “resuscitated” in 2017, they are now ours to behold.

Turn the tape on and you have an amazing wave of emotion, guitars and trumpets in “Fast Drivers”. The drums are frenzied: and good thing because regardless of the tempo of individual songs, this is the energy that does not dull once the entire album. “Morning Cartoons” and “Morning Outro” work together to create a wonderful tension: beckoning back to the bands self admitted grunge beginnings but with a much wider, more melodic scope. These folks really hold nothing back, and have so many influences it is hard to peg one down. Even just in this one song, there is so much musical, exploratory spirit, held together by the trajectory of their talent.

“End of Act” comes in with harsh drums and soft vocals to designate the state of a new chapter. The disjointed beat oxymoronically holds everything together, with an ambient landscape fading into a string section of all things, which fades into the jazz barbershop quartet intro of “Remember”. Anonymous INC sounds nothing like Chicago, but the experimental process of their songwriting reminds me of the “something special” present during the elder bands first record: Chicago Transit Authority. Listening to this album it feels like at any moment they could go into a 15 minute sound-guitar solo. Luckily for us these musicians seem to have not only that kind of power, but the needed responsibility and awareness to go with it.

“Licorice” is truly a 90’s rock song, with the pop hooks, the heavy guitars, and the everything. “Reading Brecht & Feast” is my favorite song on the album, combining ghostly vocals and ambience with hard beats and raps for days. The lyrical work on this release could be covered in a thesis, but I will let you write that on your own. Half the fun is just discovering everything Beta-1 has to offer, so I implore you to dig in, check it out on Fake Four Records!