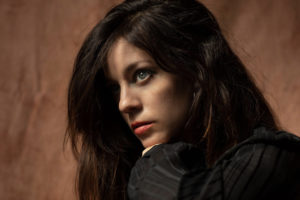 Anna Fox Rochinski’s debut solo album Cherry is a significant departure from her work with psych-revivalists Quilt. While Quilt’s music is often centered around pillowy vocal harmonies and melodies that hint at subtle mysticism, Rochinski’s solo work is more direct and danceable. Inspired by the challenge of conceptualizing songs from the inside-out, Rochinski created Cherry by moving her process away from traditional songwriting methods and approaching composition as a deconstructive process. The result is a thrilling, exploratory debut that’s rife with rubbery bass lines, staccato guitar melodies, and trilling synths.

The material also feels more personal than Rochinski’s previous work, a theme she touched on during our conversation outside the Charles River Speedway during night two of this year’s Boston Fuzzstival.

Eric Marshall (EM): I want to talk about your most recent solo album, Cherry. Maybe you can tell me a little about the impetus behind making the album, some of your artistic goals in making it, or some of the creative impulses you were following.

Anna Fox Rochinski (AFR): I actually had a bunch of songs that I was writing and kind of shelved because the material wasn’t challenging to me. It wasn’t exciting for me. So I kind of put all those songs away and I slowly but surely began to work out a sound that just felt exciting and fun and new and authentic. Songs that I knew I really wanted to be playing night after night that made me feel really good.

The impetus was just natural. All the songs were written over the course of maybe a year, a year and a half. I went through a breakup and moved to a new city, being single. Meeting new people, going through that experience, it was like a cyclical narrative that I was going through, and I just wanted to make a fun, weird pop record.

EM: Do you feel like that narrative plays out on the record?

AFR: Yeah! Not in order or anything, but I do think each song reminds me of a specific place and time within a transformative part of my life.

EM: What were some of the catalyzing moments that enabled you to make the new material exciting to you and worth pursuing after you had kind of put the other stuff on the shelf?

EM: Is that very different from how you worked with Quilt in the past?

AFR: Yeah, I would say so. Besides the fact that Quilt was very collaborative, it was sort of guitar and keyboard oriented music, and we would piece things together from what we were writing. It was a little more traditional in that way. This was me, like, figuring out how to make a song around something I’d never made a song around before, like, just a bass line or a drum beat that I liked or just a melody that I thought of in the shower or whatever.

EM: Who are some of the influences that you were pulling into the solo record that you maybe didn’t get to explore in the past with your other band?

EM: So you’re touring that material now, playing some shows. How are they going?

AFR: They’ve been going good. It’s not much of an extensive tour. It’s really just like upstate New York, here, and we did a Brooklyn show last week. We worked that out for September, and because it’s weird times, things are trickling in sort of cautiously, and I’m taking them as they come. So there isn’t a big tour booked, but everything that we’ve been doing so far has been awesome.

This will be the end of our little run for September for now, and I’m excited to be back in Boston doing it. It feels nice.

EM: You have some artistic roots here. If I remember correctly, Quilt met at school here. Maybe you could tell me a little about your relationship with the Boston music scene over the years and how it feels to be back in the city?

AFR: Well, I haven’t been here in a while. So it’s funny how much new construction there is. I actually couldn’t tell where I was for a minute because there are so many new buildings. But then I got my bearings, and was like, “Oh, right. Ok I see.”

But I started going to DIY shows here when I was 15 or 16. So like, early 2000s. And it’s very near and dear to my heart. That’s why I come back and play shows here. I always will. It’s very important to me. This is where Quilt got started, and I definitely would not have had the life I’ve had without the help of the scene here.

EM: That’s heartening to hear, because I think a lot people have a sort defeatist attitude about the city, like, if you’re not in New York or you’re not in LA, then you can’t really do a big thing out of a city like Boston, but so many artists have prove that’s not the case.

AFR: Yes. I agree. And much respect to Jason (Trefts, of Illegally Blind) for doing this festival tonight.

EM: I’ve seen you at Fuzzstival before, so I know this isn’t your first. What is your sense of how Illegally Blind has helped the Boston music scene become more legitimate?

AFR: Tonight is a great example. We’re all out here on Soldier’s Field Road. Look how many people came out. This is Jason taking a big risk on a new space in a place where people never go. Literally, who has ever been on this sidewalk before. Probably nobody. It’s like, we’re on a highway, and yet there’s so many people. Last night sold out. Jason has this magic thing about him where he just gets an idea and makes it work.

EM: There’s been a lot of change in the music scene here over the last 2 years. A lot of venues are closing due to the pandemic. I wondered if you could maybe share some of your favorite places to play in Boston.

AFR: I miss Great Scott, dearly. I feel like every show that Quilt played there was really special to me, because it was so early, and the crowds were just getting bigger and bigger every time. It felt really good to feel like I had a home venue. I hope it works out for them. I heard they’re trying to maybe relocate.

EM: I know the Pizzeria Regina in Allston closed, and they were talking about possibly repurposing that space as a venue.

AFR: I would love that! That would be so cool. I also enjoy playing at the Sinclair. It’s just very comfortable and it’s a nice big room.

EM: Everybody loves that venue.

AFR: Yup. Out of town bands that I know are like, “I love the Sinclair.”

EM: Who are some bands that you’re excited to see tonight?

AFR: I’m not very familiar with the bands on the bill, so I’m really excited to see some new music that’s gonna be fresh for my ears. But my friend Michi played last night in Really From. I wish I could have seen them, but I wasn’t in town last night. And I’m excited to see Sweeping Promises tonight. My friend Spencer’s playing in that band. It’ll be good to see them.

AFR: Yeah, I want to get back to writing new music. I really need to go home and relax, because it’s been very go, go, go the last couple of weeks just getting band line-ups together and getting ready for these shows. But next: writing, taking shows as they come. I have a couple things in the works show-wise, mostly in New York. I’m also booking a tour for spring of next year. I’m most excited to work on a new record.

EM: I saw on Instagram that you were on a boat yesterday, maybe you can tell us a little bit about what that was all about?

AFR: I met up with my friend Ben Katzman, who I actually know from when I lived here. He lives in my Miami now, but we met up in a rowboat in Central Park to do a secret project that I can’t really talk about yet. It was just a fun, silly video, but we’ll be putting it out in a couple of months. We just had a little chat in a boat.

Released in March of 2021, Cherry is out now on Don Giovanni Records. It’s available on their website and via Bandcamp for streaming and purchase in various formats. 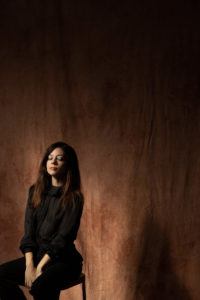