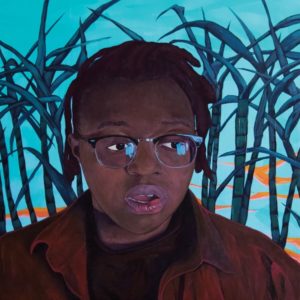 At the end of an exhausting, terrifying, and tragic 2020, a common theme arose in year-end album lists: music acted as an important comfort throughout this year of unrest. Since its release in September, Anjimile’s debut album on Father Daughter records, Giver Taker, comforted a wider audience then the Boston singer/songwriter had ever reached before with its subtle, ornate instrumentation, understated vocals, and gorgeous lyrics.

Regardless of whether or not you know Anjimile as a veteran of the local scene, Giver Taker feels welcoming from the first moments of its opener “Your Tree.” Even though fans of Fleet Foxes or The Shins might feel right at home with the song’s twinkling electric guitar, fluttering flute, and tight harmonies, Anjimile carves out their own distinct space within this familiar indie sound.

On the album’s lead single “Maker” Anjimile, who uses the pronouns he or they, sings “I’m not just a boy I’m a man, I’m not just a man I’m a god, I’m not just a god I’m a maker.” Anjimile’s delivery of this rebellious, self-affirming refrain is triumphant but wildly understated, making the words all the more impactful. “Maker” contrasts with the more reverent title track, which Anjimile described as a “eulogy for an important person in heart.”

“Maker,” and the album’s second single “Baby No More” both appeared on Anjimile’s 2019 Maker Mixtape. While both songs maintain the coffee house guitar of their originals, they have been reimagined to fit seamlessly with the diverse and subtly orchestral landscape of Giver Taker. On “Baby No More” Anjimile reflects on falling short in a past relationship over one of the album’s most infectious acoustic riffs, newly accompanied by buzzing synth, and grooving percussion.

Songs like “1978,” and “Ndimakukonda” are more straightforwardly reflective. Anjimile bears their soul on the former saying “I’m ashamed of the awful things I have done to you/What today can I make inside of my heart for you? In the sweetest deepest part of my soul you are bold and bright/I could fall asleep in your love.” Themes of self improvement and bountiful love shown throughout the album are what make Giver Taker such a deeply comforting experience amid a time of chaos.

Giver Taker culminates with the hopeful “To Meet You There” which morphs from a Sufjan Stevens emulating intro into a minimal, elegant arrangement of bubbling synths, grooving percussion, and stunning harmonies.

At just shy of 30 minutes, Giver Taker makes its mark humbly and succinctly. Anjimile’s meticulous songwriting and arrangements along with their thoughtful and and deeply empathetic lyrics would resonate powerfully in any year, but in 2020 (just as in 2021 so far) Giver Taker feels like an essential piece of musical comfort as well as an exciting debut from a longtime Boston songwriter.

Liked it? Take a second to support Owen Murray on Patreon!