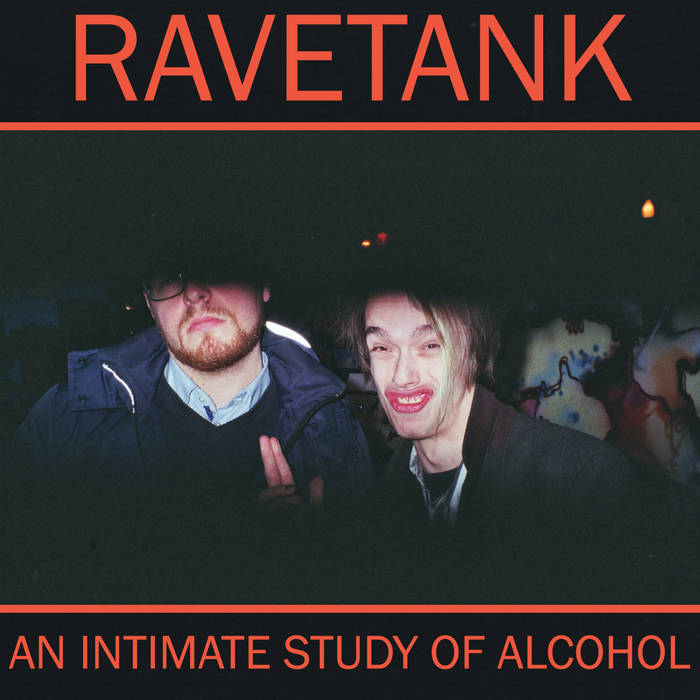 Asexuality. Alcohol. Antifolk. If you were to stop reading this review here, then you would have a good summary of Ravetank’s “An Intimate Study Of Alcohol”. With 14 songs clocking in at 34 minutes, AISOA is very short lengthwise, but chocked full of alot of great ideas that are well-executed. You have some shoegaze, you have some C86sy type songs, and you have anti-folk jams.These are all wrapped up in one tight little project about hanging out with your friends and having drinks.Sounds like fun, right? Well before we get into album, a little background about the project Ravetank.

Ravetank is a one man band, run by the across-the-ponder themself Nathan Alexander Howard. When playing live, a rotating cast of people play with Nathan. However, for all recording purposes, Nathan is the one in control. Nathan originates from a town in the UK called Bath (home to 80s legends Tears For Fears) and has recorded music for nearly a decade! They self-describe themselves on Bandcamp as “Absurdist Noise Folk”, which seems pretty apt for a project where you can find acoustic guitars on one song and sounds of busy pedestrians mixed with harsh noise next. There’s also elements of lo-fi, shoegaze (Fun fact: one of Nathan’s claims to fame is that they have a fairly popular instructional video on youtube about how to get a shoegaze tone), twee, and post-punk. Mixing a variety of music genres might be hard for other musicians, but for the music production graduate of Bath Spa University, it’s as simple as riding a bike. Being the multi-faceted person they are, Nathan not only does music, but gives back to their community via Radical Westie Productions. This is a production company based in Bath that specializes in“Punk and Indie music of the DIY persuasion”. As long as you are willing to put up a gig, Radical Westie will bring a show there. Nathan embodies the DIY ideology. They wear many hats in order in order to get the gig to happen. This diversity in their work ethic is quite simply astounding and what makes them so great. And speaking of diversity….

The multitude of genres found on this album is evident by the first track “The Post-Elvis Depressedly MD 20/20 Blues”. Like the lo-fi pioneers it references, this track is a lo-fi twee romp about coming back from a Elvis Depressedly show, buying some alcohol, and hanging with friends. The next track “Tinnie Crusher” starts off with static-noise and then has Nathan recounting crushing beers all night with an organ dancing along in the background.The next couple tracks on this album are pretty similar in their twee aesthetic until we reach “No Drink Beyond This Point”, which is a minute long shoegaze track. “No Drink” starts on the Mohs hardness scale at a 4, the standard drums, bass, and fuzzed guitar affair. This is until halfway through the song, where the composition transforms to a 7 and Kevin Shields comes alive. “Lets Get Fucked and Listen To Guided By Voices” also has elements of shoegaze as well (and references the lo-fi bands Guided By Voices and Spare Snare). After “No Drink”, the C-86/twee singalongs continue. In between, you have “Curling Up In Bed With A Cider” (a seemingly Broadcast-inspired song with no words that I could imagine hearing at the end of an 8-bit video game as the protagonist drives away into the sunset) and “Closing Time” (a sound collage that also has no words but mixes in elements of noise and field recordings). The album finally ends with the “The Orange Jubilee Blues”, which calls back to the first song “The Post-Elvis Depressedly MD 20/20 Blues”. Nathan remembers how fun the that Elvis Depressedly show was while they drank Mad Dog with friends a year ago, revealing the album’s cyclical nature and brings everything to a nice close.

Before I end my review, I just want to quickly highlight the song “Blue Raspberry Wine”, which might be my favorite song off this album next to “Curling Up In Bed With A Cider”. I had the privilege of hearing this song months before the album was released and I knew right then that this was going to be my favorite song of AISOA. To anyone who doesn’t know me, I’m already a huge fan of post-punk/C86 bands, so I was already going to be a fan of this song sonically. But my favorite part of this song are the lyrics, more specifically the opening lines. They are the following: “ Going to Bath, drinking Blue Raspberry Wine with Connor and Carrie, whilst discussing the intricacies of asexuality. Loads of people are aces and demis, but they don’t know it yet”. I really adore these lines, mainly because in popular culture (and to an extent, even in the underground), there’s no dialogue about asexuality or demisexuality. Dare I say, this might even be the first twee song to even mention asexuality and demisexuality explicitly in their lyrics (readers feel free to correct me if I’m wrong). Now this reviewer can’t say they are an expert on the discourse or dialogue of the complexities of human sexuality. But I really admire Nathan taking a chance and trying to create a conversation around a topic that most people don’t talk about. In a world where art is only considered radical if it is cacophonous, boisterous, or in your face, sometimes the most profound art of them all is just being vulnerable.

Peep Ravetank’s social media/ listen to their music at the following locations:

Bandcamp: https://ravetank.bandcamp.com ( they’ve made two albums since AISOA, so go peep those as well)

Also a special shout out to the band Spare Snare, a 90s lo-fi band from Scotland. Please check ’em out, as I did after Ravetank shouted them out on one of their songs.