Violet Nox’s debut album “Nebula” has cracked open a liminal space for itself between the words “jarring” and “comfort”. The guitar tones and beats on this record bring to mind an industrial airiness, forcing together concepts of rough, halting noise and a higher light: it is not so much that there is a balance of both, more that this musical venture exists outside the genre strictures that define a genre as one or the other. This album is post-punk without being too messy, it is well produced without losing any of its edge. The songs are long: ranging from an average of five to eight minutes means that this is not necessarily a pop album: this is a record for people who want to sit with it and find something out about themselves. The vocal melodies are introspective, and a lot of the vibe of these songs finds a crossroads at the intersection where flower child street and darkness avenue meet. There is a club there, where you want to sway, but you also want to think.

The Boston Hassle sat down with several members of the band to discuss their new record, the songwriting process, and the harnessed chaos of their craft. You can find the band playing their end of the year show at ONCE with Miss Geo, VQnC, and Audrey Harrer on 12/6.
For more information check out Boston Hassle’s “Chosen Show” link HERE.

Boston Hassle: It seems that folks involved in this group has had other projects they were involved in for quite some time. I know from personal experience that starting a new band after being known for other material can be intimidating, but do you feel like this gives you freedom to explore creativity in ways you could not before?

Dez DeCarlo: Yes! Violet Nox is really about our intense energy and chemistry that creates a volcano of beautiful sound when we all come together and play music. Being more of an experimental project, very little is planned. It’s all happens in the moment. Perhaps it has something to do with all of us having our moons in Aries — lots of fire! I play and write from a deep intuitive place. I never judge or push the creative process. Rather, we give it space and room to run like wild!

Karen Zanes: Definitely. I was coming out of a psychedelic pop outfit (The Freeways) when I met Dez DeCarlo and (our original electronic drummer) Erik Jackson, who were starting a new project. The premise of the Violet Nox was to be experimental and noise-focused. I’ve found a lot of freedom in that. I’m always looking to be involved with interesting collaborations and this has not disappointed! Writing new material has been fairly effortless with this group of collaborators. Everyone contributes a great deal to the overall sound.

Thor Maillet: I’ve always sort of done drone/ambient pieces before striking songs as Petridisch, so for me Violet Nox is a very natural fit. In a lot of ways it brings my head back to similar places to when I was doing that work primarily, so it’s nice to exercise that part of my brain again!

BH: Violet Nox has a very interesting duality to it between some darker edge industrial sound and a more airy psychedelic tinge. Is this due to a unified front of musical taste in the band, or is this binary birthed from (good) musical tension between alternating genre desires?

KZ: It’s nice that you picked up on that! This duality of sound has evolved organically. The Violet Nox never forces anything. A lot of the industrial sound can be attributed to working with electronic percussion (Andrew Abrahamson), something that was completely foreign to me before this project but that I’ve grown love. Both Dez and I play guitar and sing and write lyrics and melodies and yet our styles are so completely contrasting. Dez comes from a post-punk background; her playing and singing style are harder-edged. She’s responsible for most of the low-end guitar riffs and sonic explosions, whereas my guitar goes to the higher end shimmery and melodic realms. I also have the softer vocal style. Kris Thompson (on synth) also tends to travel to that airy psychedelic place. Thor Maillet of Petridisch (synth) sits in with us occasionally and adds a nice low-end droney vibe.

Andrew Abrahamson: I think minimal electronic music has a lot in common with what’s traditionally called “psychedelic” music in terms of the states of mind that’s it’s meant to evoke. I don’t mean industrial so much — I don’t think our sound is as hard and unforgiving as industrial generally is — but minimal dub/dance music, drone stuff and experimental ambient. I don’t see it so much as a binary. More like the same creature in different light. As far as darkness in general, I think Dez addresses some dark themes lyrically but the music itself is a pretty good trip. Loud, sometimes noisey, sometimes abrasive – but a good trip.

Kris Thompson: You can trace the dark/intense and airy/psych duality to the band’s two founding members, Dez and Karen (respectively). It’s that duality that attracted me to play with the band — and our approach that stems from that ends up seeping into more corners of musical spaces (and therefore listeners’ experience) than a lot of what you hear these days. I love that it’s not a forced duality. There’s a lot of potential reward to ignoring the unnecessary walls that people put up between musical styles and essences.

TM: In my experience with the band there is not so much talk about individual taste. We just play. It really is that simple and natural.

BH: To continue from the last question: there are some “jam” sounding elements to this album, but also there seems to be sequencers and electronic drums involved. How do you find the balance between structure and letting things glide along when the elements and instruments you are bringing to the table seem to naturally fit into one writing style or another?

AA: There is a step sequencer controlling the fundamental rhythms but in a way it’s mostly setting tempo. I keep the beats very minimal to preserve the space for other elements to breathe. Also, there isn’t any programmed sequencing as far as song structure goes. Any changes or accents happen live. I think that’s important. I want to treat the whole system of electronic drums and effects less as a controller and more as a participant.

DD: The songs all have structures verse/chorus but usually the experimental bursts happen naturally. Often i discover new tones, special effects, through a very pure process using volume, tweaking knobs, stepping on pedals, taking risks and playing with an open heart. Perfection doesn’t exist rather the freedom to express through the art of sound. This is an open collaborative project where everyone has equal say and is encouraged and supported to create as much as they want to. Again, our chemistry is great. There is never a struggle to write a song or jam — just a constant flow of magic as soon as we plug in!

KT: This is the other band duality, aside from the one in your second question. There is a “controlled” side, and part of that comes from the consistent tempo from the electro-percussion — although Andy is always nuancing other aspects of it in real time. There’s also the controlled aspect where we have a loose structural template for each song — but there’s a lot of wiggle room built in for variations, chaos flirtation and “chance operations.”

BH: Finally, is there any ritual to your songwriting process when working on a record to keep things in a common thread? Or do you make use of chaos more often?

DD: I love the chaos within our music. It’s always a special ritual when we get together even for a rehearsal. The creative energy between us is amazing! The music is a gift and I always try to create with an open mind and heart.

Nebula was so raw when we recorded it. I didn’t even have my guitar parts worked out. We took a chance and I still have no idea how I created some of the insane guitar tones. Nebula is about nothing or something. I was very influenced by John Coltrane’s music. It was a real turning point for me when one day i was listening to him and i got it! Coltrane taught me to feel what you play, don’t think about it, don’t judge it, just become part of the sound, melt into it. I try to carry this vibe with Violet Nox and maintain a positive sacred space for our music.

KT: Often Dez has a guitar figure in mind (or Andrew has a sequencer rhythm) and we’ll jam on that to figure out how we want to develop the song. Other times we’ll just improvise spontaneously — and if it seems to go well, we’ll identify how to reproduce the best aspects of it as the basis for a new piece.

KZ: With this debut release ‘Nebula,’ there wasn’t really a plan per se. We were just continually moving forward, developing material until we thought: “these songs (tracks 1-4) work well together and we better get to recording them!” By a group vote, Snow King — which had previously been released as a single — was also added to the track list. Chaos is a big part of the songwriting process, especially at the conception of a new piece. There is total freedom to try anything you like in “The ‘Nox.” A lot of songs have initially been developed by Dez working with a drummer — first Erik J. and now Andrew A. — then, the rest of us adding to that. We mostly meet once a week to rehearse and write. Over time, we are all working individually on refining our parts — so some of the chaos gets smoothed out a bit. But I would also say that we never play anything exactly the same way twice! 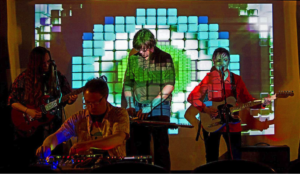