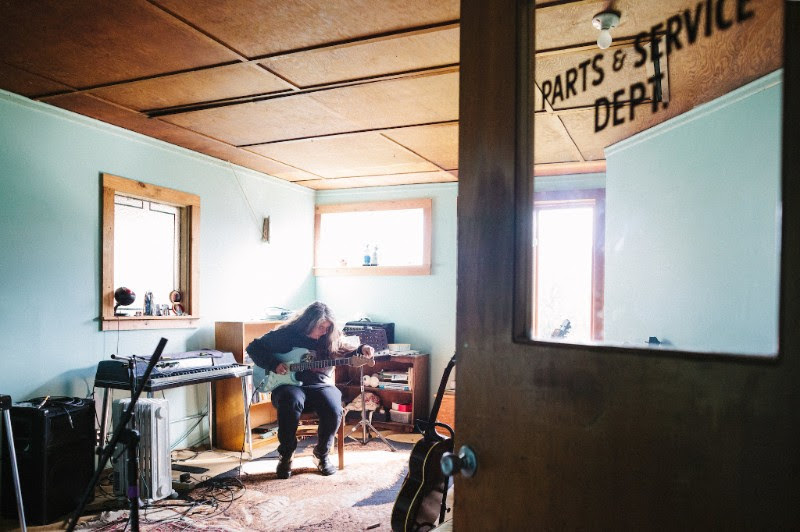 I wanted to talk to Marisa Anderson in part because I’m a bit fascinated by what seems to be an overlap between traditional musics and noise scenes. I’m also just an enormous fan and wanted to spread the word about her visit to Boston on July 3rd. She’s playing at Atwood’s with Glenn Jones. If this was enough information for you to decide you’re going (like it was for me) you can get your ticket HERE. If you still need some convincing, let me tell you about the conversation I had with Marisa by phone, on a day off from touring with Godspeed, You Black Emperor, and try to explain why this exceptional, world-renowned musician is as real as a basement show. It won’t be hard.

I guess it’s just one of my things, but so many people skip this damn town that I feel compelled to ask people WHY BOSTON? In this case, I just asked if Marisa had any relationship to or feelings about Boston. “I don’t have a relationship to Boston at all,” she replied, “I’ve played 3–maybe–non-descript shows ….and it’s weird, because i have a lot to say about most places.” Hopefully we can change that with New England’s own Glenn Jones in an excellently intimate room in Cambridge. Marisa knows Glenn pretty well, it seems; they have played together before and most recently hung down at The Thousand Incarnations Of the Rose. It was this point in the conversation where (in my head) I definitely began to geek out and get jealous about missing the event–the first ever Takoma Park American Primitive Fest that happened this past spring and which featured Rob Noyes, Daniel Bachman, and Nathan Bowles, among others. But it was cool to hear about it and hear her agree that Glenn is the real deal. Local legend. Still destroying the game. Down to support the next gen of touring pickers. Digs Frank Hurricane. Marisa agrees, “He’s feelin it.” I smiled.

So therein lies my fascination about this sort of crossover at the intersection of traditional music and public domain songs. Do I just like folk and americana music, or is it more special when the player comes from the same sort of scarcity as us in the DIY community? There’s also just the very concept that sound alone (not melody or tuneage) can be the primary objective. I was sure I knew the answer but I had to ask– had Marisa ever played noise shows? “I have–a lot.”. Haha duh. Turns out she played for years with what she called “a big, noisy 8-piece, kind of free, slightly structured group…which was considered on the noise end of the spectrum” called Evolutionary Jazz Band in Portland. Some pretty wicked shit according to this youtube vid of them playing outside in 2007. It was all starting to make sense, but as we talk further it became abundantly clear that Marisa is one of us. What a relief when you confirm for-damn-sure those heroes are real). It’s natural, it’s effortless; it’s just the path one follows when they follow that inner path. Or that of some nutty European booker, at least Marisa explained: “When I first started playing in France they would book me in these noise circles…” It’s something I’ve seen a lot as a touring musician in the DIY realm, but that has had a direct influence on her music itself! “I always try to tailor it to the vibe…when i make stuff, it starts with sound.” As I somehow knew in my heart already, Marisa confirmed that she isn’t thinking as much about melodies or anything as much as the sound: “I just think ‘I’m gonna make something out of that.’”

Now that we had covered the deeply important stuff, the music superfan in me (which pretty much decides my every move) had to ask about influences, origin and her instrument. I asked about her relationship to gospel music and how that has had an influence on her music. “The thing is,” she said, “that music is super powerful. It’s transcendent music…” She went on to explain the significance of these type of melodies existing even before the church made songs out of them. Eventually, tunes were codified, but even then different songs would splinter off from the same melody, sometimes applied with completely different intentions. Ultimately, it is the strong melodies that are important and powerful no matter what the song is about. We have a similar take on our Christian upbringings: “In church I sang those songs and they stayed with me. Luckily for me I wasnt scarred by my time in church. It’s fine…I do those songs with, I think, a pretty pure spirit. It’s about faith and trust. Whatever you place your faith and trust in…Some kind of inner light.”

I always think it’s cool to tour all over the world, but ultimately hold down the fort in a city, region, whatever. Marisa grew up in Northern California, but has been holding it down in Oregon for a minute. “Been here 20 years,” she confirmed, “Portland’s been good to me. Good circle of friends. Good place to live. I wouldnt say its perfect but…” I knew what she meant: I feel the same way about this damn place.

Lastly, I asked her about the pedal steel. Specifically why it is such a magical answer. Unsurprisingly, she did not have an answer for this, but she did elaborate: ”I played lap steel, so I had some technique with the bar. I taught myself. So the right hand stuff I understood. Then a friend of mine was downsizing his studio and he said ’You should have this,’ and dropped off. I was recording myself as I started to play it.” Made sense to me. I also just think it’s rad that she records herself, but as Marisa explained “It’s just not that hard to record a guitar I know how to get a good sound in a room, I know how to use an amp.” So yes, that was a perfect way to conclude our convo–a little piece of advice from one of my favorite musicians: “Just don’t get in your own way.”

But DO get in her way when she comes to Atwood’s next month. You can GET TICKETS HERE. Also get her new record (and get her old records).