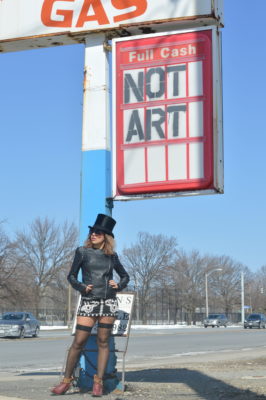 When Lady Bedouin speaks about music, energy bubbles over in a thrilling deluge of rapid-fire animation. A few minutes of conversation, and her blues-punk, alien stage persona begins to take shape: top hat askew on a volume of color-changing curls, as poetry and otherworldly vocalizations synthesize through a beloved TC Helicon VoiceLive machine. For Lady B, the arts collide in live performance. “I see myself as a poet, first,” she says. “I am a vocalist as well as a poet, but I love acting and dancing, too. I could never stick to just one art form.”

As a child, Lady B was diagnosed with ADHD, and she says that music was the only thing that calmed her, keeping focused via the repetition of beats pounding through the headset of a cherished Walkman. She brought that love of music to the States upon moving here from the Middle East, as she set about religiously exploring the Boston music scene. A weekly budget included money set aside for cover charges and passes to see live shows, to be immersed in the outlet of music. “I realized that after spending all this money,” Lady Bedouin says, “that this is all I would want to do, that this is my passion.”

But, being a passionate female fan in the underground had its downsides: “I was treated like a groupie by guys in the bands I loved, and I felt degraded because I was passionate about the music. That anger in me propelled me to be an artist.” Armed with a degree in English Lit and a penchant for lyricism, Lady B saw a way to marry her talent with her passion. “I far prefer this way to deliver my poetry – with harmony and melody,” she says. “To have the chance to sing my words and my verses is a dream come true.”

There was only one flaw in Lady Bedouin’s plan: “I thought I couldn’t become a singer because my voice is not that powerful.” But, taking influence from Punk Rock and the Blues, she soon began to see that it didn’t really matter. “Oh!” she exclaims, “and I found a miracle machine.”

Like the childhood Walkman that was LB’s salvation, it was a TC Helicon VoiceLive that set her free. A machine with hundreds of vocal effects gave Lady Bedouin the excitement, confidence, and inspiration to engage her audiences with poetry through a shapeshifting voice. “I generate weird, primitive sounds and chants,” she says. “When I’m in the zone, I am channeling something powerful.”

That power is what Lady Bedouin is looking to help foster among youth through a new community arts initiative, Quality Urban Education (QUE). QUE is a music education program for Boston’s under-served teens that partners them with local musician-mentors for creative skill-building and band development. Inspired by her work in an after-school tutorial program with teens at the Boston Arts Academy, the idea for QUE came to light: “They were just so passionate,” she says. “All they wanted to talk about was art, and I realized that that was all I wanted to talk with them about, too.”

But, Lady Bedouin has a special drive for working with youth who don’t have access to the kinds of musical resources that a place like Boston Arts Academy offers. Speaking of her own childhood, she says, “I know that a lot of kids from low-income backgrounds don’t have access to resources, just as I did not as a kid growing up in the Middle East. We didn’t even learn music in school.” She goes on to talk about how QUE is the kind of program she could have really used as a child, “I started music really late in life, as an adult. I was a troubled kid, so I would love to see kids today develop skills through access to musical resources and just have fun with it. Let them put their energy into music.”

From salvation to obsession to her very life’s blood, music is the passionately creative constant of Lady Bedouin’s journey. In her own words, “Music is my survival,” and the next stop along the way for Lady B is to use this key to surviving to help Boston’s young folks and their communities thrive.

above photo by Molly Dower