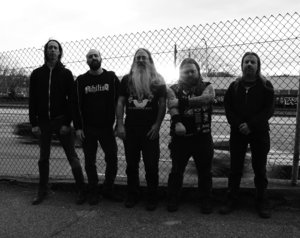 Hell Bent are a thrash/crossover/D-beat/metal band out of Rhode Island. They are a perfect mixture of speed and anger needed in today’s world. I spoke with 3 members of the group about cover art, Rhode Island, lyrics and metal. Enjoy!

2) You have a demo and an LP out, any future plans for more releases?

(S): Absolutely. We’re already writing new material. I would love to have another release in 2020. Everything happened so fast with recording/releasing the LP in time for MDF that it would be nice not to have that pressure the next time around, but I’m really happy with how everything turned out.

3) The band formed out of 2 different bands (Neon Bitches and Straight to Hell). When did you guys decide to get together?

Brian: That’s not exactly right, STH was me, John, Badger and Josh. 1999-2005
Neon Bitches was me, John, Josh and 3 different bass players Shawn being the last. 2007-2015
We started Hell Bent in 2016, immediately after we broke up Neon Bitches, we started writing new songs but it took about 8 months or so to find a stable singer and choose a band name. Josh didn’t want to play live so we replaced him with Sam.

(B): We’ve all known each other for ever. When I was asked to join as vocalist it was a no brainer since I’ve been friends with these guys forever.

4) On top of the two bands that Hell Bent formed out of, you all have experience in playing in active bands, does that make being in Hell Bent easier? What are some of the other active or inactive bands that you guys have been involved in?

(S): The only other active band I play in at the moment is called Hard Drug. We should will have a full length release in 2020. For me Hell Bent has been the most personally involved and the most creative direction I’ve had of any bands thatI’ve ever been in, so for me personally it has been more difficult than ever before.

Brian: I’m most known for being a founding member of Dropdead, but I’ve played in a ton of bands since the ’80’s, mostly just for fun and to release a tape or a 45. Rat Stab is the last band I played in that toured at all.

5) Rhode Island has always seemed more open to thrashier and more gritty punk/HC/Metal, why do you think that is?

Brian: I don’t think that’s actually true, there are a lot of commercially leaning bands around. any scene I’ve been involved in is underground so separate from those things.

(B): RI is boring and you have to make your own fun. Trust me, “extreme” music hasn’t always been his hot down here as you think. When I moved here in 93 it was like a goddamn Happy Days convention when the entire punk and metal scene almost unanimously went rockabilly. The ex punks and bangers were easy to spot by the holes in their leather jackets. 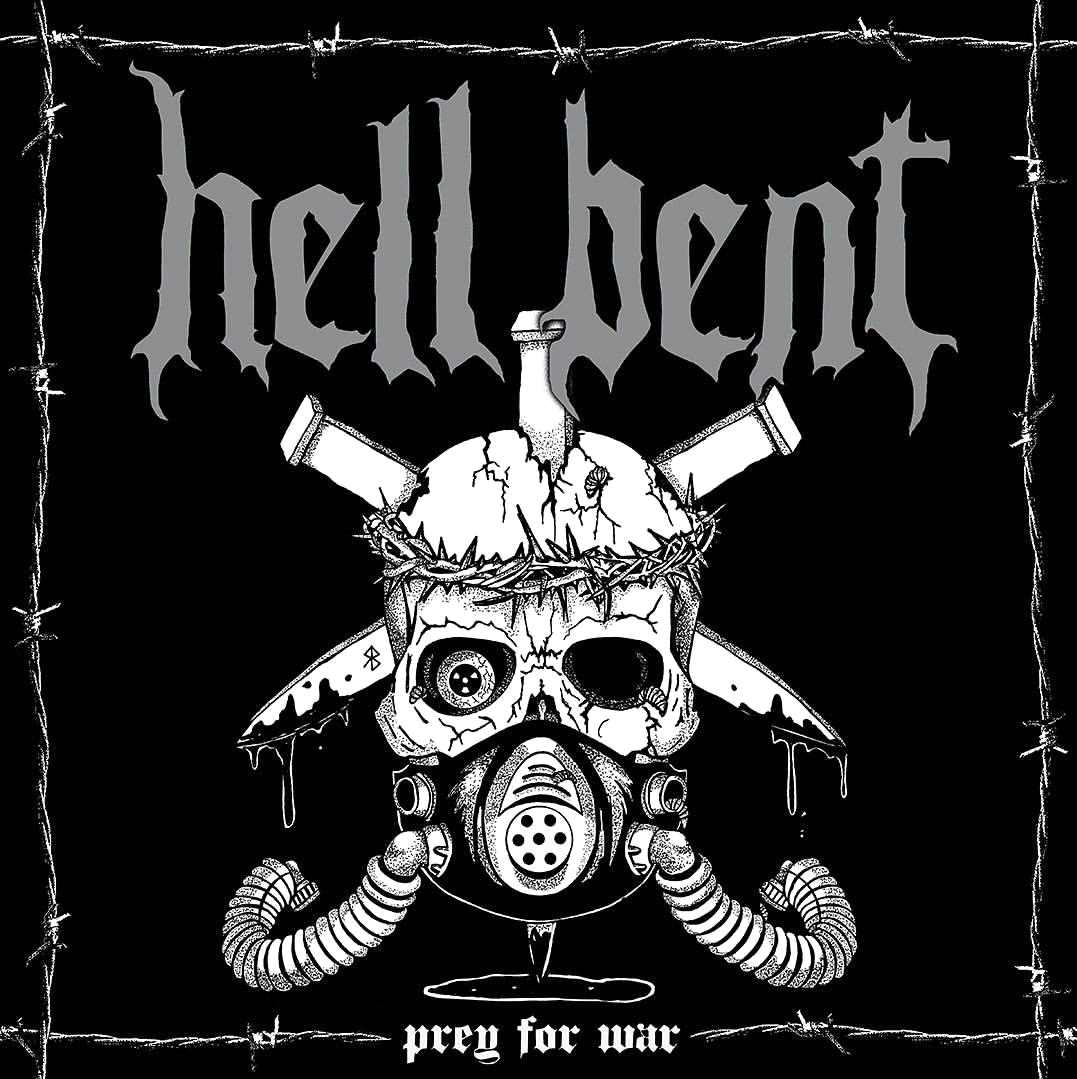 6) On the LP, you sing about humans need to be warmongers in the song ” Prey For War”, in the current political climate, why do more people not see this truth?

(B): That song neither glorifies nor condemns war, I’m just saying it’s the inevitable human condition and ultimate socio political conclusion. People want to be idealistic and think that at some point we’ll evolve past aggression. That’s easy for us to do here in the US because we haven’t had armed conflict here since 1861. People in other parts of the world have had a vastly different experience.

7) In the past it almost seemed that the thrash metal and punk scenes were at odds with each other, in the past few years they have seemed to come together, why do you guys think that is? Do you find Hell Bent’s audience to be a mix of both subcultures?
Brian: Seems the same to me since the 80s honestly.

(B): The early punk and metal scenes hated each other. Then we had the cheesy “crossover” scene in the mid-to-late 90s which birthed most modern extreme music such as grindcore, crust, death metal and black metal. Our music combines all of these influences, because we listen to whatever we want and don’t care about what “cool” people instruct us to like. From the early nineties on, all of these genres have and continue to bleed into each other, no matter what any “purists” say. A great example of that would be Mayhem, who once had “no mosh” and “no core” on their records. A little digging will find photos of two of their singers wearing Dead Kennedy’s and Cryptic Slaughter shirts, so their sentiments were wishful posturing at best.

8) The LP was a split release by Armageddon Label and Atomic Action, how did this come about? Did you guys reach out to or was it the opposite?

(S): We have all known Ben (Armageddon) and Brian (Atomic Action) for many moons and thought it would be great to combine forces for the LP. We asked Armageddon first and Atomic Action shortly thereafter. Since both labels cross over between some similar, yet different heavier genres of metal/hardcore/punk, we thought it might help bridge things since we’ve all been involved in various scenes throughout the years. I think our music is definitely an amalgamation of our influences and interests throughout the years and those labels represented us well. 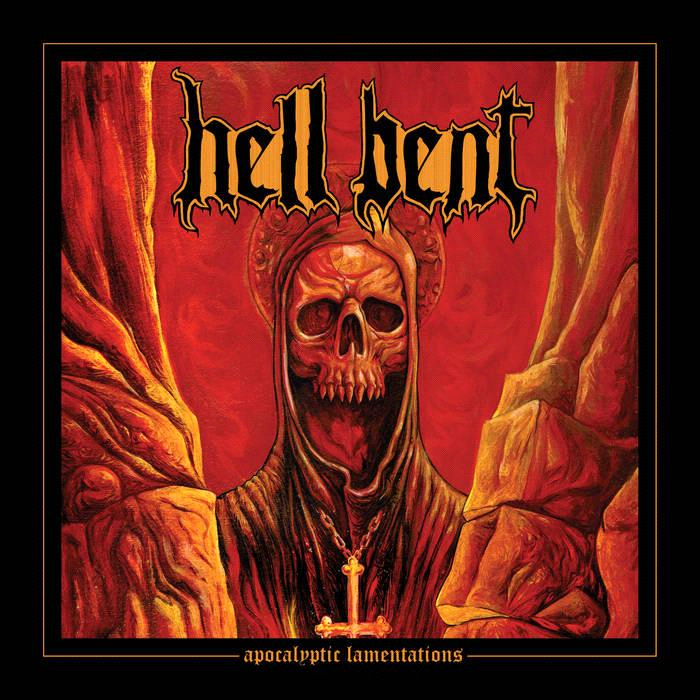 9) The cover art on ” Apocalyptic Lamentations” is eye grabbing. In the age of streaming and Youtube how important is great cover art? Do you find that physical media is still considered an important medium in the underground?

(B): We’re all big fans of Drew Elliott’s art, so when he sent us samples that was the one we all agreed upon using. We like it because it kind of looks like something that was lost from 1986. And you are correct- there’s nothing like holding the actual LP in your hand, with original large artwork, lyric sheet, etc. Digital can’t compare.

Brian: I think it’s super important. But i am old. it lends a legitimacy to do physical releases to me, same as playing live shows. it’s part of the whole thing, putting in the miles and what not.

10) What are you currently listening too?

(B): Poison from Germany, Sacrilege BC, War Fare, Exorcist, and Motorhead.

(S): The labels that have helped us…Armageddon/Atomic Action/HPGD, and those who have booked us, come to our shows, bought stuff, etc…we truly appreciate it.

Follow hell bent at https://instagram.com/hell_bent_metal?igshid=1694nvb0lll95 and listen to them at https://hellbentri.bandcamp.com/releases

Watch GET INTO IT! at https://www.youtube.com/c/GETINTOITwithJasonHook