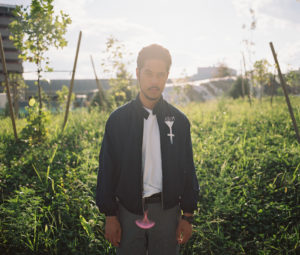 Boston based Fillipino hip-hop artist Rex Mac recently released his self-released, self-produced full-length album, Abloom via soundcloud & all other digital streaming platforms. This work listens like an epic poem caught in the quickening pace of the Greater Boston area. Unlike other local artists, Mac plans to stay in Boston & continue to write, organize & play an important role in the growing rap & hip-hop scene. I met with him at a café in Cambridge to talk about playing the upcoming Hassle Fest, his new album ABLOOM & where to get the best coffee in the city.

Rex Mac grew up in California & Boston with a love for music he got from his father who raised him on a steady diet of MTV Hits & Saturday morning music video marathons: Ja Rule, Puff Daddy, Ludacris & the like. Today, now 26, his rhymes & his midi keyboard fuse beats & heady lyricism within an exciting meticulous performance. He has his sights set on the scene to reinvigorate it for a new 21st century Boston. Openly confronting mental illness & the depression & joys of growing up both in California & Boston, he is part of the growing effort to explore hip-hop’s more emotional, personal side.

Mac, in a way, is a stand-out in the Boston scene for this reason. He inquisitively seeks expansion in his sound & embraces the greater sea-change in hip-hop referencing Kendrick Lamar’s record ‘To Pimp a Butterfly’ Frank Ocean’s ‘Blonde’ & Kanye’s ‘Yeezus’ as points of inspiration.

Milk steamers screaming, our conversation (among the cafe’s other conversations) & the background music blend together as the sound of the room; Mac drops his first zen-like witticism of our interview ‘ I always try to make sure that I write to occupy the space I set for myself beginning to end.’

His performance, dancing & rapping on a bare stage, is a challenge when approaching area venues, but also reflects his embrace of solitude. Feeling akin to secluded monks who seek spiritual enlightenment, Mac takes this attitude to his music. ‘This is the sound of existential crises’, he raps off the track The World is not Enough. Rex Mac raps & talks in the power & dissonance of Homeric couplets in a relatable 2017 tone. ‘Melody gives me more access to emotion than words do… beat first, lyrics second & then I throw everything at the wall’’ – Mac’s second witticism of our conversation.

But the self-label of a monk is not to say that he is secluded from the hip hop community in the Boston area. The reverse is true. He is an organizer & deeply involved in the scene. He speaks very highly of space where he has recently performed including East Meets West Bookstore, Jamilah Unique’s monthly multi-genre installment Art Plug, at Roxbury’s the Inner Sanctum, and Wreck Shop Movement’s Sunday subway cyphers in downtown Boston. He also organized his own monthly hip hop showcase, Sonic Bloom, this past year at Cambridge’s Out of the Blue Too Art Gallery. He cites Aaron King and LuDow, owners of Cambridge business Bridgeside Entertainment as well as Oompa and Cliff Notez of the collective HipStory as the local artists who currently have his ear.

Soon, Mac will take his performance to a new venue at ONCE ballroom for the 9th Hassle Fest on the night 1, November 10th. He is as excited to play as he is to open up the ears of an audience who may not be as familiar with his sound. He sees the cultural influence that hip hop is on rock & electronic scenes & will continue to be. Though the east vs. west mentality of rap still persists, he drops his third gem, ‘all of our unique sub-genres are being combined into one cultural melting pot’. As Trap music continues to dominate the genre, Mac’s music provides clarity to the scene’s self-aware inquiries between Trap & the new emotional, personal turn in the music. ‘Its more about feel than thought, if there is any word to describe rap, its ‘now’.