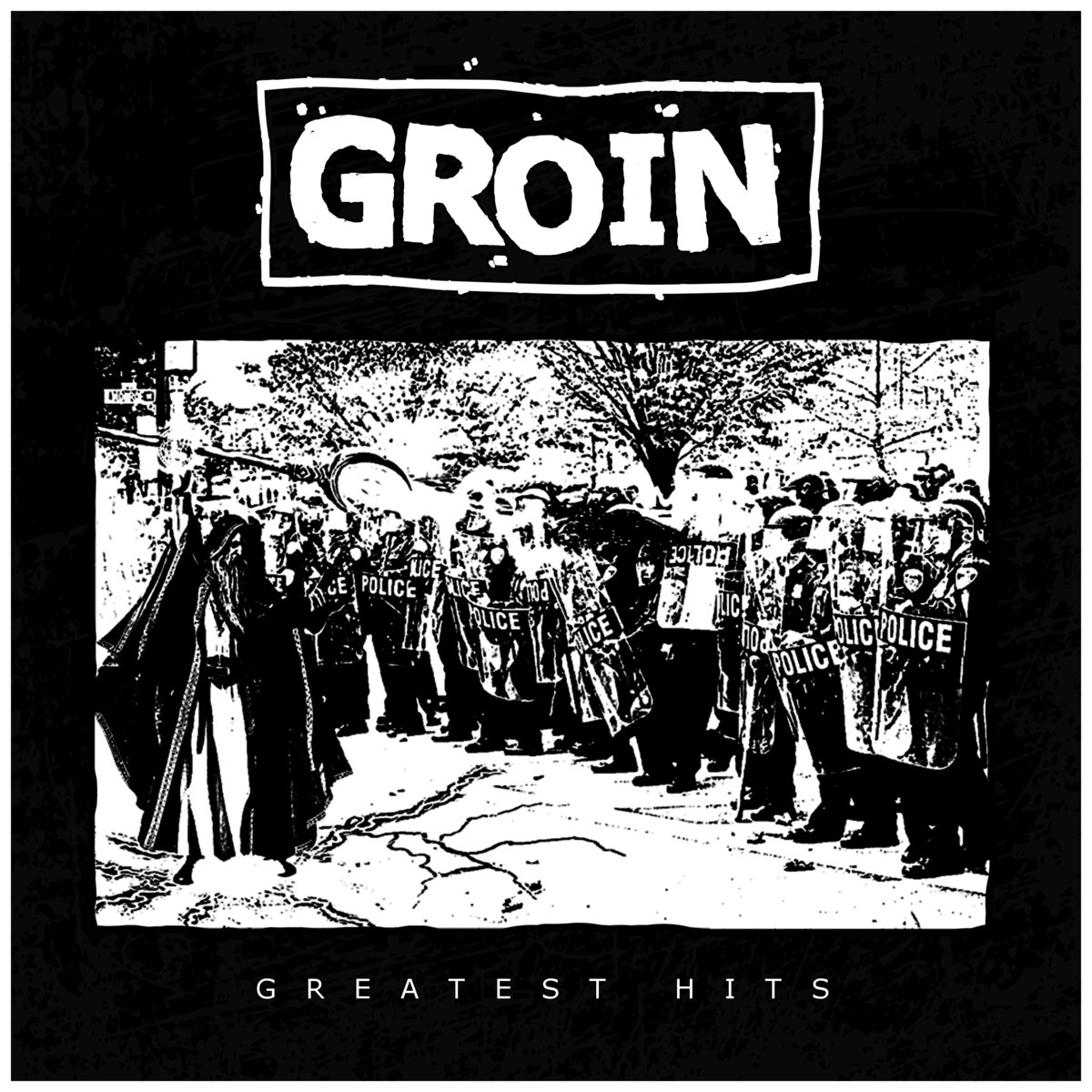 From the barren wasteland of the Arizona desert comes GROIN. The band recently dropped a 9 song ep on Bandcamp that will shred your brains. In the following interview we discuss Arizona, music genre, touring and shows. Enjoy!

Jason Hook: Who are you and what do you do?

Hook: You just released a 9 song ep on Bandcamp. Any plans for a physical release? Do you think it’s easier nowadays to just release music digitally?

Austin: We have a friend who offered to hook us up with some tapes so we’ll hopefully have some of those in the very near future!

Lois: Yeah, hopefully the tapes work out, but releasing on digital is so easy. We honestly had no release date in mind, but after we all agreed on the final mix we literally made a Facebook, Instagram, and Bandcamp and uploaded it almost all in the same day.

Matt: I love a good tape. I wouldn’t be opposed to financing a small run of 7″s if there is enough interest, but that stuff is hella expensive.

Josh: I want to put every song on an flexi and sell it as a booklet.

Hook: Any plans to hit the road? What would be the ideal lineup at a Groin show look like?

Austin: No plans as of yet but I don’t think we’re totally opposed to it. I’ve traveled a decent amount in past projects and would love to get things going with Groin. It just might be a bit tougher since we all have full-time jobs now. As for an ideal lineup, we’re definitely happy we can play diverse shows with our music and want to play to a variety of different types of scenes. That big fest coming up with Fuck on the Beach headlining would be a pretty sick show to play but we really are just always down to play whatever sounds like a good time.

Matt: It would be sick to play some shows outside of Arizona, but like Austin said we all have full-time jobs and we’d have to plan pretty meticulously for it. I’m really anxious to get on a show with Sex Prisoner or Magnum Force. It might be a long-shot, but I’d also love to tour with Hoobastank.

Lois: I’m down to disappoint anyone on any coast and in any country and playing with any band that demands lots of cardio out of their audience is fine by me.

Josh: Touring would be fun. As we’ve all said – work gets in the way so maybe some summer/weekend stints could be possible.

Hook: How do you guys write? Does the music come first with the lyrics filled in or the other way around?

Matt: I didn’t write a single note. Austin and Josh are infinitely more competent instrumentalists than I am. I play what they write to the best of my ability. Seriously, I can’t stress enough that I am the least talented or creative member of this band.

Austin: I had a solo project called Wiggle Room I put out for fun that we actually adapted a few songs directly from. I always liked listening to those songs and I’m glad I get to use them in a live setting now. I ended up writing the majority of the rest of the songs for this release but Josh wrote Cop Collar which is one of my favorites. He has been cooking up some more riffs that are sounding really good. He’s super talented at writing so I’m excited to collaborate more in the future. Lois came up with all the lyrics and I’m super impressed with how well his vocals came out on this record.

Lois: Yeah I try and throw my 2 cents with A Capella guitar and drum noises. As far as lyrics go I have a shitload of random phrases and gripes in the notes app of my phone that I use as the base for songs. Then like a slime mold I expand on them and fill in the gaps.

Josh: Song writing on this release has been primarily Austin, the man cranks out hits. Some songs are from a previous solo project of his. I have riff ideas I like the share with the band too. I got a few ideas in the bag for the next release.

Hook: The band is based out of Arizona, what is the music scene like? Do you guys catch bands touring on their way to California or heading in the opposite direction to the East Coast?

Matt: I moved out here a year and a half ago from the Bay Area, so perhaps Lois and Austin might have a more informed assessment of the Tucson and Phoenix scenes respectively. There certainly exists a scene outside of the touring circuit. As I’m sure is the case in any tertiary market city, the scene can feel a bit self-contained at times. There are the heralded “local legends” and the youngsters still experimenting with “their sound” and whatever you might find in a place one would conjure in their mind’s eye when they contemplate the name “Tucson” without having been there. By that same merit, what I am a part of here feels unique. The sentiments I feel towards the Tucson scene likely will not translate to someone reading this in New York or South Florida or Boston, or even places as close as Southern California or Texas – places that have a palpable presence in the Hardcore/Metal/Loud-Music conversation. It’s like that Johnny Cash song about the old flag waving in some little town. It’s bloody, caked in bile, riddled with bullet holes, but they’re not about to take it down to hoist a new one. From what I gather, the scene out here has been through trials and tribulations for much longer than I’ve lived out here and it will endure long after I’m gone. I’d also like to throw this out there. I have never been a part of a scene that is so culturally diverse. Tucson is not only home to the Pascua Yaqui and Tohono O’odham tribes, but countless Mexican and Mexican-Americans to whom this place has been a home for centuries. This is not at all lost upon the hardcore community out here. In this way, I will always be a visitor or an outsider here, yet I have never been made to feel like I don’t belong. I know that probably sounds hella cornball and woke. I’d like to point out A) I’m from the Bay Area, where everyone is cornball and woke and B) every universally-beloved hardcore song is cornball and woke, but it doesn’t make those songs insincere.

Lois: I’m not as well traveled, so I’m unable to compare. Matt articulated that better than I could have. All I know is the AZ scene is tight as fuck and everyone is invited.

Josh: Matt and I have only been part of the music scene for about a year and a half. I moved here from Pennsylvania. The music scene in Arizona has been so welcoming and is much more active and diverse than in the area of PA I’m from. No matter what direction bands are moving they usually stop in either Phoenix, Tucson, or both which is really cool. There is always something going on.

Hook: How would you describe your sound? I think its a pretty good mix of Powerviolence and Grind, am I way off?

Lois: I think we’re a Grind band that wishes it played Powerviolence. I just like riffs that beat ass and where people can get violent.

Josh: I don’t care to label it. It’s loud, fast, and short. Grindcore and Powerviolence influenced for sure, but every member of the band has their influences that they’ll compare it too. As stated before, most these songs were written by Austin, so the next release will be more collaborative and might sound different.

Hook: A few of your songs have some expertly placed sound bites in them, is the art of the soundbite lost? Who picked out the soundbites?

Austin: Lois was mainly in charge of picking them out and the rest of us were pretty on board with them. I picked out the Barenaked Ladies sound bite and the Fox News clip in the last song.

Lois: I’ve been waiting to be in a band that would be okay with soundbites. They never go out of style and honestly it is way fucking cooler using them than counting in a song.

Matt: Soundbites, if used tactfully, have the ability to channel the divine.

Josh: I’ve always liked soundbites in short songs. Graf Orlock is the king of sound clips though. We mostly just picked the ones that were funniest to us. The BNL one had us dying.

Hook: Who are you listening to? Any bands that you think fly under the radar?

Matt: I haven’t been listening to a whole lot of “hard music” lately. I’ve got a lot of The Weakerthans in rotation, the last two Smith Street Band albums, the Black Marble album from last year, Jordaan Mason, and a lot of Everclear. Mostly, I listen to audiobooks or podcasts. I’m listening to “Libra” by Don DeLillo right now. The guy who reads it, Michael Prichard, does a lot of the longer DeLillo novels. He’s got a great voice. In terms of who folks should be looking out for, Slow Descent from Tucson. There might be something uncanny in their sound, particularly to people with more traditional ideas of what hardcore should be. To me, it is all the best parts of what I liked in high school, distilled and played by virtuous musicians. They’re all sweethearts too. Also, I know Mad World plays SoCal with some regularity. Their shows here in Tucson are always wild and they get better and better every time I see them. If you’re reading this and you live in Los Angeles or San Diego, go see Mad World the next time they come through and bust someone’s head open. They just put out some new tracks too. Go buy them things.

Lois: My playlists always look like they’re being shared by a family of five. Lately it’s been AURORA, Beneath the Massacre, Grimes, Heiung, and Dying Fetus.

Josh: Mostly listening to podcasts, Every Movie is Good and Demolisten are my top two. For music it’s been the new Pinegrove album, and that RJC/Wound Man split which is flames. Slow Decent, Mad World, and War Prison are just some of locals that deserve recognition for the work they’ve been putting in.

Hook: How does living in the oppressive desert heat not make you lose your mind….or have you all lost it and Groin is the result?

Matt: Like some bird species native to the Sonoran Desert region, I will often vomit and defecate on my feet to neutralize the burns I sustain from striding across the arid sand.

Austin: Same thing for me.

Lois: “This city should not exist; it is a monument to man’s arrogance” -Peggy Hill, King of the Hill, S13E20

Josh: Summer is brutal, the rest of the year is tight. Don’t tell the retired folks though.

Matt: The A2G Fantasy Football League, the State of Arizona, Angel from Mad World and Chris.

Austin: Carter, Chris and everyone who has been a part of the process, or supported us to any degree.

Lois: South Tucson, all of AZHC.

Josh: All the friends I’ve made through AZHC, my friends back in PA, and Chris.