American Wrestlers made a stop at the Great Scott Tuesday night on their tour of their latest album, Goodbye Terrible Youth, released on Fat Possum Records early last month. Though the crowd was sparse (as Tuesday night crowds tend to be at the Great Scott), American Wrestlers and support acts, Varsity and Sinnet, made sure to fill the space with honest energy and driving sets worthy of a packed house.

Sinnet got the night going with their smooth indie pop laced with hints of soul influences. They opened with haunting but catchy track “Paper Chandeliers.” The Boston band worked in other previously released tracks like “Houdini Hands” and “Castlevania,” as well as songs off their first upcoming full-length release due out in early 2017. 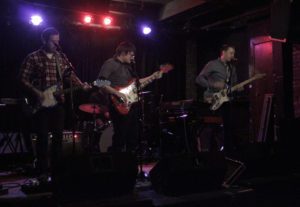 Following was the infectiously poppy indie rock tunes of Varsity. Hailing from Chicago, the band played a high-energy set that gained the most crowd involvement and draw for the night. Frontwoman Stephanie Smith exhibited dreamy and powerful vocals as the band offered bouncy, jangly instrumentation behind her. Varsity played through “Still Apart” (a song with a music video that supposedly draws the kindest Youtube commenters in the world) as well as “Hairpool.” The combination of Smith’s vocals and the band’s seemingly effortless talent lead to an all-around solid, enjoyable, and memorable set. The closer, “Amanda” was both a highlight and a perfect way to close the set on a note that made you want to dance, but also shed a tear because it was over. 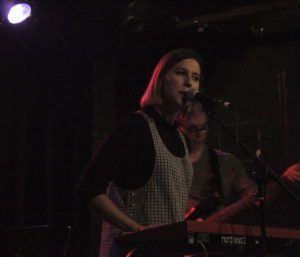 By the time American Wrestlers took the stage, most of the crowd had retreated to the bar at the back of the Great Scott, but it didn’t prohibit the band from playing an exceptionally decent set. The St. Louis-based band fronted by Gary McClure started off with “There’s No One Crying Over Me Either” from their debut, American Wrestlers released in 2015. Though the recorded version of the song is melancholy and mellow, the live rendition was injected with driving liveliness making it more of an anthemic rock tune than anything. Perhaps this is because McClure recruited a backing band, whereas in the original recording, he was relying on no one but himself and a drum machine. The fullness that the band provided really set apart the songs McClure showcased off Goodbye Terrible Youth, including “So Long,” a criminally catchy tune played early in the set. The song is layered with synths, a simple, but powerful chord progression, a driving beat, and McClure’s sharp vocals that cut through the instrumentation.

Up front was the entirety of Varsity cheering American Wrestlers on, and why wouldn’t they be? McClure has been able to curate an indie pop project that manages to distinguish itself among the homogenous sound that has become common in America’s alt-rock/pop scene. Maybe it’s because at times the sound is heavier, or the songs are more straightforward and not trying to be complicated and impressive—they stand beautifully on their own. Or perhaps it’s just McClure’s Scottish touch that makes his music so refreshing. Either way, by the time American Wrestlers neared the end of their set with “Kelly,” a favorite off their debut, it was clear that there was undeniably something special about the music the band has created.

There was a point where McClure commented that shaving his head the night before was “the most fun had all year,” but based on the impressive show American Wrestlers put on, he may have some fun upcoming shows (with perhaps a more appropriately sized crowd) that will rival it.