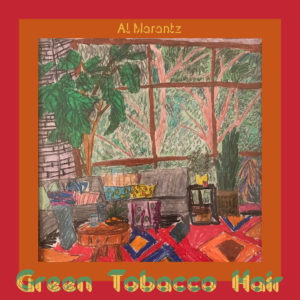 Al Marantz’s new album ‘Green Tobacco Hair’ is a collection of 13 songs that takes us through a landscape of lo-fi synths, pop in its purest sense, and some experimental moments. His vocals, at times lazily delivered, and always minimalist and elegant, provoke a sense of stability throughout the record.

It kicks off with “Deflecting Laughter”, a moody song. Acoustic guitars play a rather “poppy” arrangement with the bass demanding most of the attention. A restrained rock n’ roll, “Determine What” gives us a glimpse of the rest of the album. Catchy melodies, classy vocals and an old school style of composition with some modern effects.

With a very melodic organ, “Bend the knees and count to 4” is a dreamy tune. Al’s mellow vocal rests elegantly on the laid-back drumbeat. The length of the song, barely 2 minutes and a half, enhances its simplicity and surprise effect. “Waitin’ for the Bus” is subtle rock, powered by harmonizing guitars and a simple but original melody.

A ballad for the downtrodden, a song that lifts the spirit; “Resident Dancer” creates an aura of peace. The 60’s sounding guitar solo adds color to a song already vibrant with contrast, using the vibraphone and synths in supporting roles. The minimalist production of this song is one of the album’s greatest achievements. “Febreezing the Sheets” starts with a pop piano before progressing as a solid prog-rock tune. We again feel that dreamy aura.

In an introspective twist, “How to Evolve” is another success in its cohesiveness and tweaked sounds.

We move on to my personal favorite, “Stetson Brown”. Favorite perhaps because it tells the story of an outlaw, or for its mellow quality. Either way it is a masterful composition. It is very hard not to find yourself cooking and humming:

“Automatic Feels” is a sunny morning by the beach… a humble breakfast… back in Panama. The song evokes a peaceful memory through soulful, melodic guitars and a minimal bass line. “Crystal Light” has a 1970’s rock, almost Jethro Tull sound to it. The lyrics are abstract and all over the place, matching well with the chaos of the song.

In “Pickle” we see a calmer Marantz. A high piano harmonizes with the vocal adding depth to Al’s voice, which cuts through like a knife in the lower register. Ocean sounds gradually fill the speakers in a long vamp at the end. “Rattlesnake Tattoo Sleeve” is an eclectic two minute number that breaks into two. It starts out as a standard rock and roll-er but quickly morphs into a piano suite.

The album ends with “Finger in the Honey”, a jazzy outro of bouncing synths and distant drums.

With Green Tobacco Hair, Al Marantz delivers the record of a songwriter looking in. We hear him searching for his roots and trying to expand upon them in songs like “Stetson Brown” and “Resident Dancer”. Those songs should be taught in school.

Liked it? Take a second to support Arcadio Falcon on Patreon!