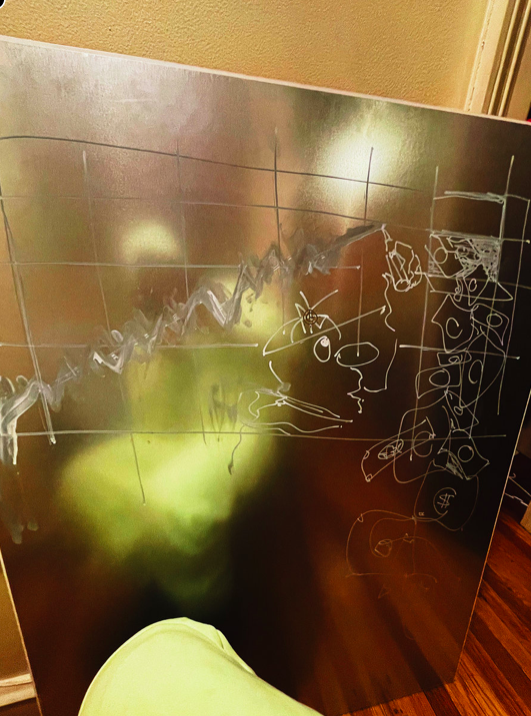 Not sure why I decided to wander down
the alley. It seemed like a good idea
at the time. I had time to kill. A bo-
ne at the ready. Something about the
trash enriched humid air beckoned. Yo-
u should always default to “Yes”.

So I thought at the time. I looked at
the walls. Lots of strange cartoons s-
wirled. Amatuerish, but fine. What di-
d I expect? Fra Angelico? I walk and I
see lives shrewn out into collapsed tent
hovels. The stench of failure and
decay. Piss. Thoughts tearing away. S-
moke rises. I withdraw from the vortex.

I see a man throwing garbage into a d-
umpster. I see the Horn on it’s side.
The man looks at me. Eye contact. He
shivers. His demeanor changes. From a-
loof and vacant to stern. There is a f-
ire raging below the surface, barely
containing the steam pouring from hi-
s ears. Or was it thoughts? Either w-
ay, it’s comical. I laugh. There is
actually steam pouring out of the ma-
n’s ears. When he shakes his head in
disgust at me and passes through the
doorway, I realize he was standing in
front of an air vent.

The alley encloses around me. I see
tendrils descending from the roofs a-
bove. Terror spreads. I witness the
lightning flash of an internal movie.
A street. Long ago. Fitchburg. Looki-
ng out a window in Acton onto the st-
reet. Night. Three figures. Sub-mach-
ine weapons. Altercation. One shadow
figure is split in two by white hot
metal rain drops bathing the night a-
ir in hellfire, innards, and blood.

Entrails writhe. Coming back to life.
I see it clearly. The figure turns i-
nto an intestinal spider of vengeanc-
e and rage. There are no words for th-
e terror. Lifeless black eyes scannin-
g for consciousness. It looks up to m-
y window. Slow lumbering movement. Aw-
kward rage directed solely at me. Lig-
htning. Power surges through the oran-
ge streetlights. The scent of burning
plastic.

The memory has been sparked. Transpo-
rted from dream reality to the prese-
nt. Creeping tendrils wrap around my
shoulders. Burning into me. The black
eyes appear. Endlessly deep. Haunted.
It was around this time I knew I was
going to die. I was scared. Darkness.
I hear the sound of alien, impersonal,
laughter echoing off the brick walls.
Then nothing.