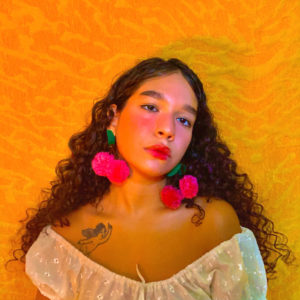 I recently had the pleasure of meeting with Oohmamii, a Chicana artist with indigenous ancestry based in Austin, TX, to discuss her musical work and get to know the messages behind it. I also got a first-hand look at some of her upcoming music along with insight into her future plans as she continues to create absolute bangers that draw authentic connection with her listeners.

The first Oohmamii record I heard was ‘Last Summer’, a finale to her three-part project “BAD GIRLFRIEND” which showcases her journey to self-love after surviving an abusive relationship. Her emo-groove eclectic sound and aesthetic drew me in from the very beginning, but I found that beyond her fun, beachy, moving songs, was real poetry – the kind that exposes a person, the kind that only the bravest writers release.

When I asked Oohmamii about this song in particular, she explained how it was written as a play on both a closing of a relationship as well as the complete global shift brought on by the pandemic and ever-apparent effects of climate change.

Oohmamii: “This song is about a doomed relationship, framed within two contexts: The highly saturated Texas summer heat, and the COVID-19 pandemic, which had only been around for a few months at the time. The virus was continuing to spread, and even though the U.S. (Namely, the Trump administration) tried to downplay it, we all had this sickening feeling in our stomachs that things were never going to be the way they used to.”

‘Last Summer’ has a upbeat retro-pulse that gently pulls the listener into the dance of the song’s characters, echoing the sentiment that everything is different now, while highlighting the collective yearning for innocence and ease.

Her other singles ‘Cookie Jar’ and ‘Txt Me Bby’ dive even deeper into the self-worthiness wounds caused by narcissistic abuse as well as the experiences that can lead to abusive relationships.

‘Txt Me Bby’ brings the listener face-to-face with the lived experience of a toxic relationship, whereas ‘Cookie Jar’, on the other hand, calls attention to the feelings of mistrust with oneself as well as hesitancy to open up to new partners.

Specifically, with her Cookie Jar, Oohmamii explained the meaning of the opening verse

Oohmamii: “For me, this song is about reckoning with the fact that I’ve lost trust in myself — trust in myself to make healthy choices, and to surround myself with people who have my best interests at hear.”

Although each song has it’s own unique beachy dream-pop flavor, they are seemingly connected by symphonically layered synths, mellow guitar melodies, and perfectly gated 80’s-style drums.

She credits this to her collaboration with producer and fellow music artist, Austin Medrano, who also works as producer for his band, Mickey Darling, as well as his solo project, Nico Days.

Finally, when asked how she is able to be as vulnerable as she is through music, and why she chooses to be so vulnerable through this very public medium she replied:

Oohmamii: “I think creating, and sharing what we create, is one of the most important ways that we can not only heal ourselves from the shit that we go through in life, but to also learn from and grow past it to become the people we were meant to be”.

The lyricism in each part of BAD GIRLFRIEND echoes these very sentiments with poetically drawn scenarios that dive into the emotional depths of the emotional abuses that far too many of us face in both platonic and romantic encounters.

Her upcoming projects promise the very same openness with some added intensity. I was able to get a sneak peak of T33TH, a beautiful but violent soon-to-be pop classic that will allow you to cut your toxic ex off and/or vogue in the hopefully socially distanced club.

T33TH will accessible to listeners everywhere this coming fall, and sooner than that, her very next release, METANOIA, will be available on all streaming platforms September 17th!