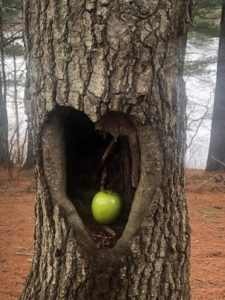 In the basements of Boston, Paper Lady is cooking up their own blend of ethereal rock and noisy freak folk. A Paper Lady set is a mesmerizing and whirling wall of sound that washes over you and puts you into a trance. The guitars and keys are well washed in reverb, with the rhythm section cutting through the mix, providing a solid clarity and stand out from the typical dream pop and shoegaze sound. The entire band matches this sound with a harmonized ensemble of outfits that lend themselves to the overall witchy energy they project. All of these factors combine for a very memorable live performance.

The band evokes images of wide-open skies on the night of the full moon, rituals with mysterious robed figures chanting in eldritch dialects, and the cyclical nature of the seasons and the stars. Paper Lady formed in August of 2021; the band is composed of five mutual friends who met at Berklee. Alli fronts the band and is the primary songwriter, Kenzo plays keys, Rowan is on guitar, and Alex and Will are on drums and bass. Alli draws inspiration from Mazzy Star, Broadcast, and Jefferson Airplanes’ later more psychedelic work. The band’s songwriting mostly begins with Alli bringing sketches to the rest of the band who then write their parts to flesh out the rest of the song and then bring them to practice where they collaborate and make final changes.

The group to date has released an EP, “While You Should Be Sleeping” with tracks such as the layered and driving, “Absentee” and the relaxed, “Return to the Lake”. Up to this point, the band’s output has been mostly indie with aspects of dream pop. The band hopes to continue to push their sound into a more chaotic fever dream with aspects of folk and rock. “The goal is to get weirder and more experimental as a band,” said Rowan. While the basement shows feature distorted guitars and layers of reverb the official recording of this new material will be a bit different than how it sounds in the basements of Allston.

Alli is excited to see how the recordings turn out so the songs can be heard in full detail, “How it sounds live will be a lot different than the recorded stuff because there will be lots of little things that you can miss.”

All the members of Paper Lady are also involved with their own solo projects including Kenzo Divic, Rowan Martin, and Will Deville under their own names as well as other bands such as Kenzo’s Happy Jade from Toronto,  and bassist Alex Castile in the project Wet Jawns.

On April 16th, the night of the pink moon, Paper Lady will be releasing their latest single, “Eve”. “Eve” is a song with themes of female empowerment, taking the perspective of Eve after being expelled from the garden of Eden. This will be the first single of their newer material so make sure to check it out this Saturday when “Eve” releases on streaming services and BandCamp.

Liked it? Take a second to support Kyle Serena on Patreon!