The new band (also featuring Hana Kearney and Alec K Redfearn) streams a Hassle Plague series thing THIS SUNDAY 9/20 on the Hassle youtuber. Or you can even catch it right here on the Hassle site…

Dan Shea:
How did the band come together?

Dan P. Boucher:
Alec & I have shared bills a few times over the years in different bands we were playing in, however, we were only properly introduced a few years back by our close mutual friend (and incredibly talented artist/illustrator) James Quigley (of gunsho.com). James had been telling me for years how well the two of us would get along. He was right. Being that we’re both insatiable music, art and oddity sponges, we were old friends instantly. Yapping about bands we love with varying degrees of listenability…the majority leaning closer to the unlistenable end of that spectrum. It was effortless. Alec has been doing a solo modular synth project called D.U.M.E. that I really love, so I offered to put out D.U.M.E.’s first release on cassette. Because of that I ended up spending a lot of time in Alec’s apartment two summers ago listening to different mixes, talking lots of shit and pondering the fucked up state of the then pre-pandemic shitshow that is our world. That eventually led to us saying, “fuck it, we should play sometime”. Fast-forward to recent end-times, I bought my first semi-modular synthesizer during lockdown, a Moog Grandmother. Alec has been kind enough (and patient enough) to teach me the rudiments of “musical” synthesis. We started, as aging stoners do, noodling endlessly and then eventually forming semi-structures. While Hana was playing in Freakbag, she and Alec began discussing a collaborative project at some point. I knew Hana from playing shows at the News Cafe in Pawtucket, RI, where her presence was (and still is) always a highlight of any night there, so it all just happily fell into place. SYLS is the first time any of us have played together as an actual “band”. Since most rehearsal spaces are currently shut down due to Covid-19, we moved a mess of wires and gear into my garage and have been fleshing out weird sorta dance jams over the summer. It has been insanely fun for the three of us but my neighbors perhaps not so much.

DS:
What’s Say You Love Satan all about?

DPB:
The band is Alec playing a wiry assortment of modular synthesizers, both of Eurorack & Moog variety. Hana is singing, chanting, dancing, and messing with various oscillators & electronics. I’m hack-attempting the aforementioned Moog Grandmother, while bashing an old Korg drum machine, playing drums (sans any cymbals and snares) and live-processing what Alec & Hana are doing as it happens. It’s messy, minimalistic, psych-y, invocational dance music with a Kraut twist I suppose. The band name was taken from the 1984 murder of Gary Lauwers by “The Acid King” Ricky Kasso. More specifically, it was inspired by the bat-shit-crazy right wing “satanic panic” that ensued in the mid to late 1980’s. A panic where middle class and/or affluent (predominantly white) parents blamed AD/DC, Judas Priest, Black Sabbath, denim wearing, drinking, drug use, and normal teenage behavior for their children’s maladjustment problems. That is, rather than owning their own lack of parenting or presence in their children’s lives. The finger is always easiest to operate when it’s pointing. The reason it seemed so relevant now is that there are some parallels between that era and the current state of the bat-shit-crazy right wing QAnon supporters. Spouting off about non-existent satanic and pedophelic hysterics as scare tactics where no actual evidence of either is anywhere to be found. That is unless you consider Trump’s close friendships with Jeffrey Epstein and Ghislaine Maxwell.

DS:
You’re raising money for The Satanic Temple, want to tell us a little about that?

DPB:
YES! Right now, with all that is going on in the world, it was rather difficult for us to pick a specific charity to donate to. We ended up choosing The Satanic Temple for the obvious, albeit shallow reason that it goes along nicely with our band name. However, the not-so-obvious reason was far more alluring, and that is, what The Satanic Temple actually does. They are NOT a religious organization. They do NOT promote violence, witchcraft, wizzardry, beastiality or virgin sacrifice. Their tenets are NOT based in occultism, Magick or folklore. What they do is fight for social justice causes, abortion & reproductive rights, they fight against anti-tyrannical government systems, and, to put it in most simple of terms, they vehemently fight to eradicate ignorance (aka assholism) and narrow-minded mentalities (aka shitheadedness) globally. They have their work cut out for them for sure. People often confuse The Satanic Temple with Anton LaVey’s The Church of Satan, which is an entirely different beast. LaVey’s COS was far more hedonistic; whereas, TST is more about personal growth and the act of thinking about how one’s actions affect others, positively or negatively. They do like to play Satan’s advocate and fuck with antiquated societal norms, which is something I am one-trillion percent behind. To give some perspective, these are The Satanic Temple’s seven fundamental tenets:

1. One should strive to act with compassion and empathy toward all creatures in accordance with reason.

2. The struggle for justice is an ongoing and necessary pursuit that should prevail over laws and institutions.

3. One’s body is inviolable, subject to one’s own will alone.

5. Beliefs should conform to one’s best scientific understanding of the world. One should take care never to distort scientific facts to fit one’s beliefs.

6. People are fallible. If one makes a mistake, one should do one’s best to rectify it and resolve any harm that might have been caused.

7. Every tenet is a guiding principle designed to inspire nobility in action and thought. The spirit of compassion, wisdom, and justice should always prevail over the written or spoken word.

Hard to argue with any of those. Their website is worth checking out: https://thesatanictemple.com 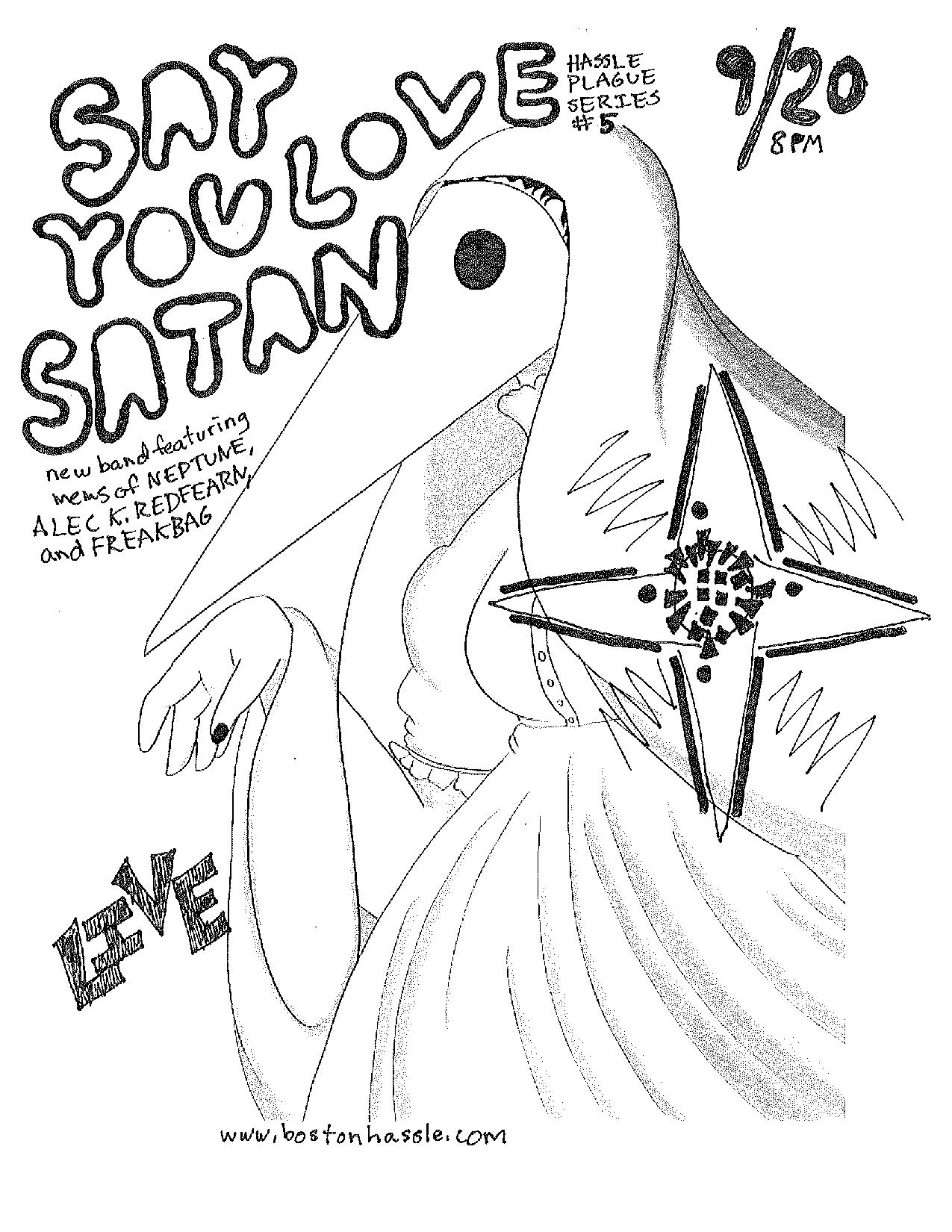 DS:
If we are saying we love satan, are we also saying we don’t love god, or should we have already said that a long time ago?

DPB:
Very good question and there is a lot to unpack here, so I will attempt brevity but will surely fail at it. I adamantly believe it is up to every individual to find their own belief system whatever that may be. I believe in Satan about as much as I do some random dude who lives on a cloud that will make everything OK solely by whispering to him crouched by my bedside. Which is to say, not at all. That being said, I understand the world can be an incredibly bleak and lonely place (look at the news, left-based or right), so I also very much understand the need for believing in something. Anything. It is glaringly evident to me why religions are so prevalent in our seemingly doomed society. I totally get it. Personally, I am a science-based thinker that has little use for any organized religion. I feel they are corrupt organizations based on power and monetary ladder-climbing like any other at a corporate level. That is just my view. I would never attempt to force my beliefs on any other person. If they arrive there on their own, cool. If not, equally as cool. As a gay man that survived catholic school (which is what I perceive hell to actually be if it did exist), I saw glaring hypocrisies even before I even fully understood them. It is exceptionally heavy for a young kid to ask themselves, “if god is this all-loving, super-rad person-like entity, why would they hate me for the way I was born, what did I do wrong?” I felt duped before I had any time to figure my shit out. At a very young age, something in the water did not compute. I have friends that practice all kinds of religion/non-religion and that is wonderful. As long as they are happy, kind and honestly respect other people’s beliefs. Live your life and let others live theirs how they see fit. I will not argue about religion. I don’t feel that my views are the only correct ones. They are just based on my life experiences thus far. Everyone needs to start with themselves. Whatever works for the individual so long as it is not self-harming or throwing wrenches into other people’s lives is the path they should gleefully traipse. I am a very spiritual being, however I have no idea what is behind where the blue sky ends. I am fully OK with that. I suppose my guiding force is the natural world. It is naive to think we’re the only beings in the multiverse, so I just hope at some point in the journey we are let in on the bigger picture because it is endlessly fascinating to me. Essentially, everyone needs to do their own thing and just own it. Don’t think you know enough about the world to tell others how to live their lives. Harmony. Empathy. Respect.

DPB:
Scenario 1: World ends in 2022 (this might be overly optimistic). Scenario 2: We are so, so, so fucked. Scenario 3: Donny “Bump” Trump, Jr. accidentally invents the cocaine antidote while doing massive rails on an endangered orphan hunting trip in Antarctica. He and his bro’s chose Antarctica because their fleet of stretch Hummers do waaaaay better donuts there (apparently you get siiiiiick spins on melting ice), but coincidentally, it will be the only inhabitable continent on Earth by autumn 2021. He then tries to sell said antidote for a million dollars a shot, however for lower income families, it’s 2-3 million per shot based on a sliding scale of “hotness”. Upon hearing this George Soros, Hilary Clinton, Michelle Obama & folklore Satan fund an alien anal sex cult to take him out which will simultaneously turn everyone into carnivorous gay clowns. A reanimated Pope Ronald McDonald will come back to earth from their 7-ringed (onion, obv.) hamburger planet (which in the future is 100% plant-based, after Their Holiness R. McD. did some serious soul-searching in early 2021) to perform mass conversion therapy and will successfully un-gay the entire world! YAY! The one stipulation is that everyone will still be a clown. 🙁

Having a chat w/ Shiloh of Butch Baby ahead of their streaming show on...

Who knows? Angela Sawyer knows! And she’s playing as part of the Hassle Plague...

But what her performance will be like on saturday @ 8pm is anyone's guess!

Talking w/ Steve Davis of +DOG+ ahead of their Hassle Plague Series stream on...