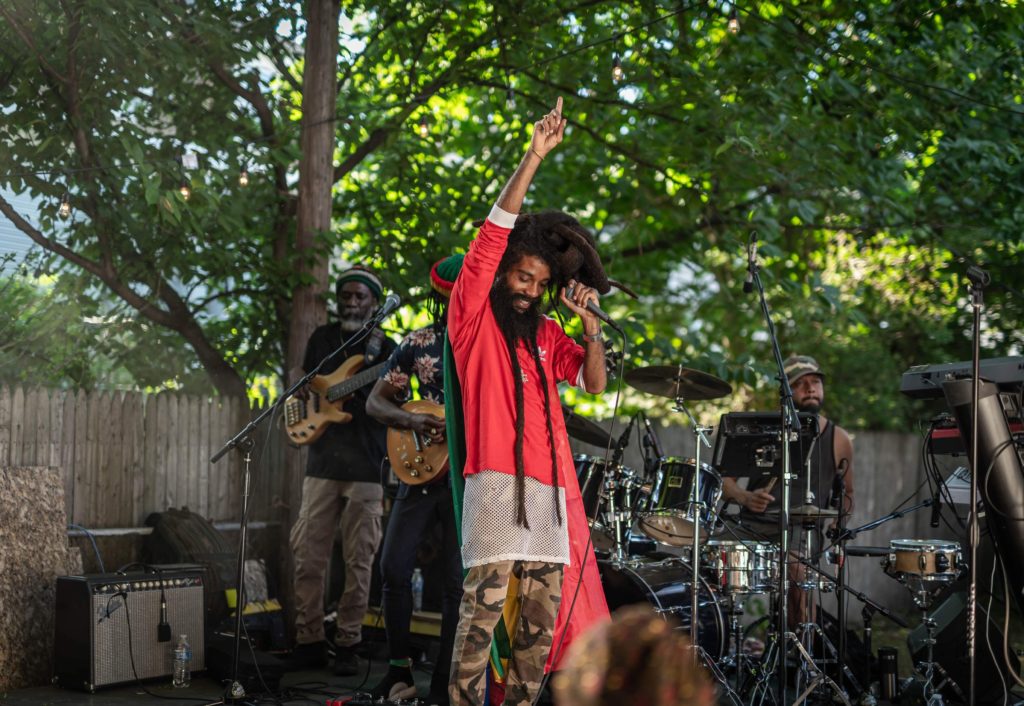 It’s a late Sunday afternoon in May and some reggae musicians are warming up on a makeshift stage in the backyard of a Dorchester triple decker apartment. A dj spins dancehall and old school reggae in the corner of the yard. Guests in brightly colored Spring style stroll in, some dressed up as if they were going to club on a Saturday night. Patrons sip on Heineken they’ve brought themselves or micro brewed beer they’ve paid for at the makeshift bar on the second floor of the apartment. Other guests gather on picnic tables on the lawn or on tables set up on the balcony, complete with freshly picked flowers in vases that sit on top of linens. In front of the tables on the grass, a full on stage is set up on the lawn. Neighbors peer in from adjacent balconies and driveways, hoping to catch a glimpse or an earful of the uplifting reggae vibes infiltrating the air.

In a few hours, Zuggu Dan, a Jamaican artist who recently moved to Boston straight from Kingston, and is living at the same apartment building where the event is being held, will hit the stage just before Yaadcore— a big name reggae dj recently turned vocalist, also from Kingston.

This is a typical Sunday scene of the Reggae Takeova—a music community and movement that, since Covid hit, hosts events in the producer, Dan Zimmerman’s, backyard. During pre-covid times, the event had a steady night following at La Fabrica in Central Square, as well as pop up events throughout New England– from Beverly to Burlington.

Since covid has killed so much live music over the past year, Zimmerman, once notorious around town for throwing stellar backyard barbecues and house parties at the same place the Takeova is being held, took matters into his own hands and started hosting reggae shows in his backyard. He follows social distancing guidelines by capping the number of people he allows at his house. Tables on his lawn and balcony serve as both markers to separate groups of people so they can safely social distance.

Zimmerman is one of many artists and producers who have had to migrate their creative spaces first from public to virtual, and now, more recently, to outdoor public spots or, in this case, personal spaces during warmer months. Covid has, no doubt, hit artists and cultural practitioners hard– constraining them not just in terms of if and how they can perform, work and teach, but the spaces they work in. Yet those same constraints and restrictions have also bred creativity by offering up creatives in the industry the opportunity to start fresh and create new spaces. The Reggae Takeova is certainly paving the way. 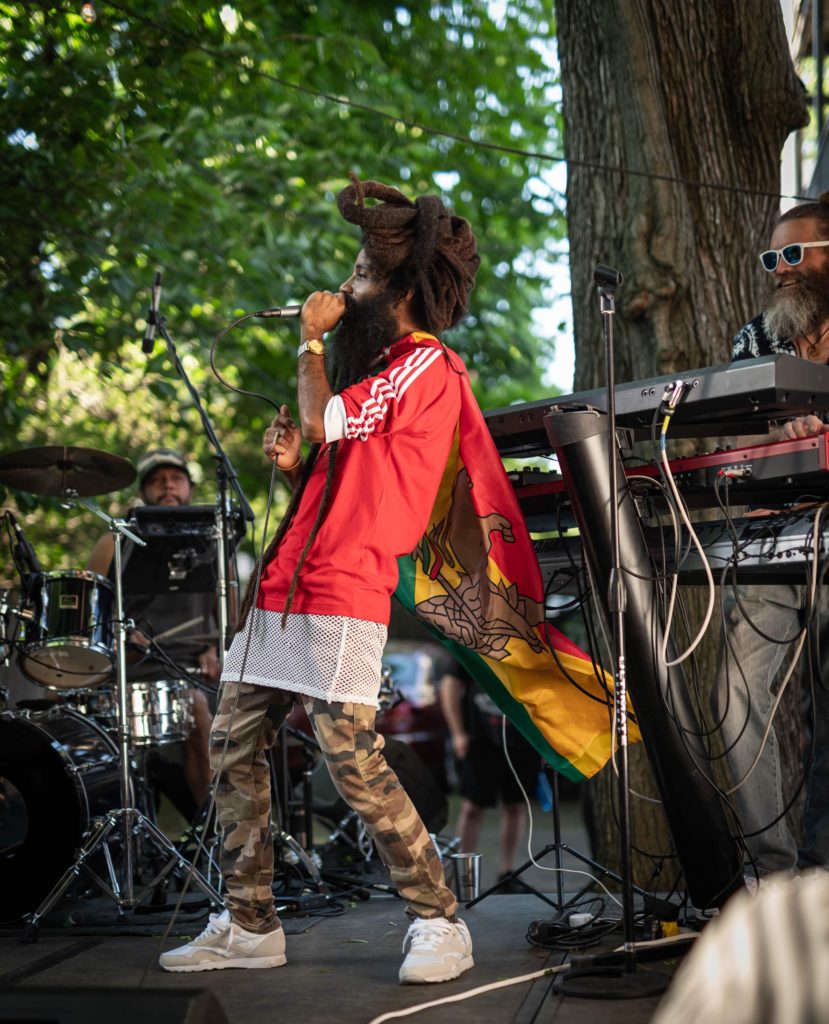 Zimmerman, along with his business partner Nico Charrel, are continuing to host events in Zimmerman’s backyard throughout the Spring and Summer featuring mostly reggae bands, as well as a sprinkling of Latin bands including Monolo Mairena. The Takova also has collaborations at various spaces around the city such as, at the new dispensary, The Western Front, in Chelsea. Notable upcoming shows this season include Papa Michigan on June 19th at Dan’s Dorchester house, and a festival at Tavern on the Wharf on June 20th in Plymouth, which will feature Michigan again, Boston reggae veteran Errol Strengths and the popular local act Dub Apocalypse. Reggae big Addis Pablo is also set to headline a second festival in Plymoth on August 15th.

For some in the reggae scene—both artists and audience members, the outdoor events at Dan’s place are both a blessing and bittersweet. This past fall, Bull McCabe’s, one of the scene’s staple spots for consistent and quality reggae (as well as funk, rock and more) closed its doors as a response to both rising rents in the area and the economic devastation resulting from Covid-19. Bulls was a hole in the wall Irish pub in Union Square that you might easily walk by without noticing. Still, the small space offered big sounds, and for many musicians and fans, there was no doubt something special about that humble place. One local reggae musician wrote on instagram that the space “transcended boundaries between show and rehearsal.” Since there were about 3 consistent reggae nights there that featured different bands, artists also considered it both a practice and performance space, where rotating musicians could pop in and perform as they pleased. Some said, this type of casual, inviting, improvisational atmosphere served to nurture artists’ creativity and a tight knit community of both artists and fans.

In many ways, Zimmerman has brought a similar ambiance found at Bull McCabes to his house. Reggae fans nostalgic for a pre-covid musical experience will certainly feel at home, and yet may also feel inspired about new spaces opening. Covid has cancelled so much arts and culture this past year, but the Takeova is an example of a strong arts community rallying together to keep creating in the face of great loss. 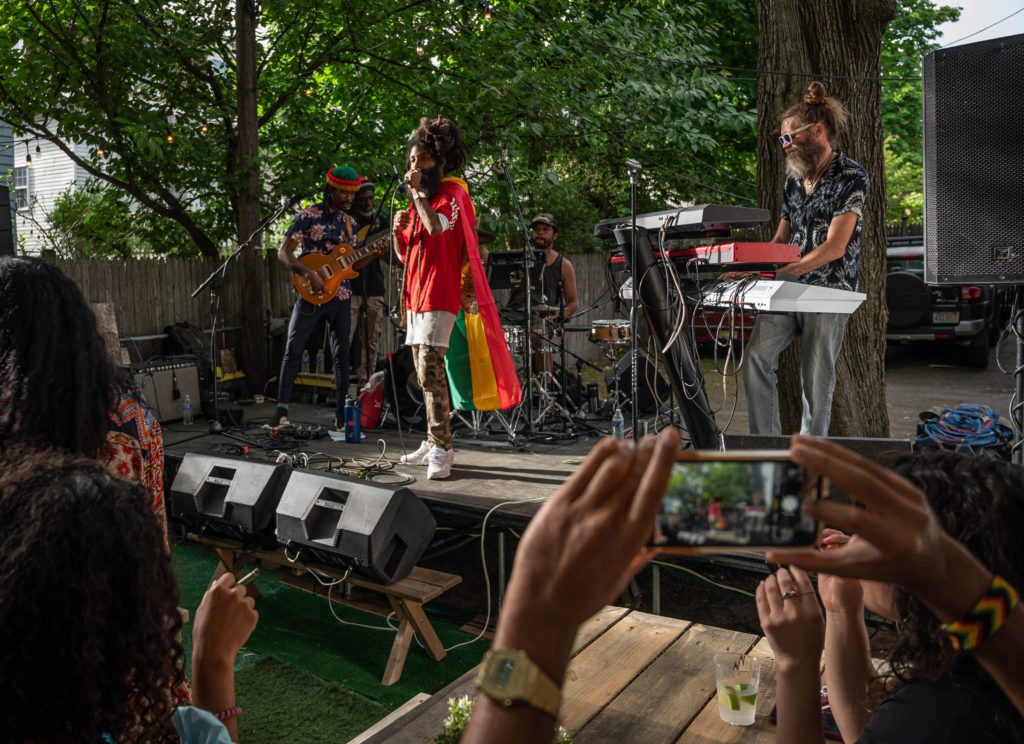 Liked it? Take a second to support Micaela Kimball on Patreon!