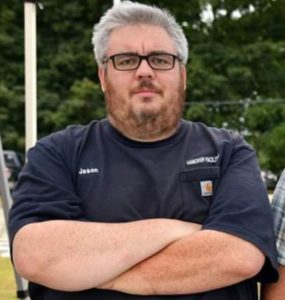 DS:
Ok, and are you still working??? How has the virus situation affected your life thus far?

JH:
I am still at work, I actually have a meeting in an hour about staffing. The building maintenance crews are still working, cleaning and disinfecting the buildings. The water treatment people are still working as well as the Highway and Grounds. We all have to stay on board to keep the Town moving throughtout this process. Buildings are still being used for meetings etc etc. There is a general fear outside of work of getting this and spreading it around on top of catching it at work, very stressful. On top of the possibility of being laid off, we all have seen many friends and family members hit hard by this. I am concerned about being able to support my family as well as being able to do what I can to help friends in need.

DS:
I’m with you. I work in facilities, so I’m literally with you. I just work for a non-profit doing this kind of work. I guess we’re lucky to still be employed at all though? I’ve been creating quarantine zones at the shelter I work at for the past week. Today it is actually being put to use for the first time, unclear whether it’s for covid or not. What is the general tenor and mood of the residents in the communities in which you live and work ?

JH:
It’s an interesting mix, I see people who are taking this seriously and people who genuinely seem to not give a shit. You drive by public parks and see kids running around. Right now, most of the people I actually work with seem to be more afraid of losing income instead of being sick. How wild is that? If this reaches the level it has in other places, I am curious how the public will react to it.

DS:
Well, not getting sick is obviously, should obviously, be priority #1. Clearly there’s a disconnect for some people. Whether that’s Trump effect or general ignorance I don’t know, but I’ve experienced it enough to know that it’s very real. The loss of wages though, that’s real too, and has to be priority #2. I realize it’s not equal to not getting sick but the writing is on the wall. I think many of us, even if we cant compute how serious the virus threat is personally, can all see that we’re hurtling toward an economic disaster never before seen in our lives. What’s it going to look like on the “other side”? Are you still making videos, or planning to make them during this?

JH:
I am not sure what’s on the “other side”. Seems to me right now that the current administration has no idea what’s going on. I kind of feel like people may view employment differently after this. I also hope people learn to rely on each other as well. I hope to make more videos, the room has been converted to my wife’s workspace right now. I have some interviews in the pipeline, I just have to edit them. I am also very active on the record collecting Facebook group I run ( https://www.facebook.com/groups/1466540200124371/ shameless plug) I just hope these little things I do can distract people for a short moment, if that helps at all.

DS:
I don’t even know what that means, but I agree that working from home, work in general; society is going to look different after this.
I just hope that it doesn’t affect “going out” in any real way. You and I and many others, thrive off of this. This is much of what punk
and other punk adjacent communities ARE. The “going out”, the gathering, the getting together over our shared music, or in the market
setting, our shared”weirdness” for lack of a better term. It feels to me like that whole way of BEING is threatened right now by this
virus, by what this virus and future viruses spell for human life…

JH:
I am way too young to remember this but I often wonder if this what the AIDS epidemic in the 80’s felt like. People being generally misinformed and driven by fear, hopefully over time people will realize what precautions need to be followed to prevent this from spreading and we can return to a somewhat normal life, but who knows?

DS:
Well, people are misinformed right now, but aren’t a lot of people seemingly not afraid enough? What a fucking mess on top of a disaster. Reagan and Bush One certainly fucked over people with AIDS and hundreds of thousands of died. It sure looks like Trump is trying to outscore them in that department. I’m just angry everyday about what is going on. Are we verging on nightmare or are we already here? Our society was already so sick before covid ever showed up.

JH:
We are already in the nightmare, it’s just more in the open right now. No one cares about each other and I would hope a massive event like this would sway people on not relying on the powers that be to take care of them, but, I feel like people will change then revert back to being selfish, its human nature and very sad.

DS:
I think people do care about each other though man. But the politicians nearly across the board serve the interests of the elite and powerful. These are not the same as the interests of the poor and the weak and the disenfranchised and the minorities and the non-capitalists among us. We elect these fucks (sort of, sometimes) who only screw us time and time again. It’s wholly masochistic.

JH:
I often think about how the public is gonna react in a year or so from now, I see all sorts of social media posts thanking super market workers, nurses, public works employees etc etc. If these workers strike or walk off jobsites over labor issues will the public support them. I have walked in many a picket line and always hear “get back to work” or “stop being lazy”. Will the public still support these people when this ends?

DS:
They fucking better is all I have to say. People are fucking dying. This will HAVE TO happen if any of this big change that people are whispering about is going to come. I was just incredibly inspired by an interview Michael Moore did with union organizer Jane McAlevey.
https://www.stitcher.com/podcast/michael-moore-4/rumble-with-michael-moore/e/68666801

Fucking hope creating. Made me want to get involved with the unions even more than when I get talking with you!

This conversation took place over email @ the end of march/ beginning of april 2020.