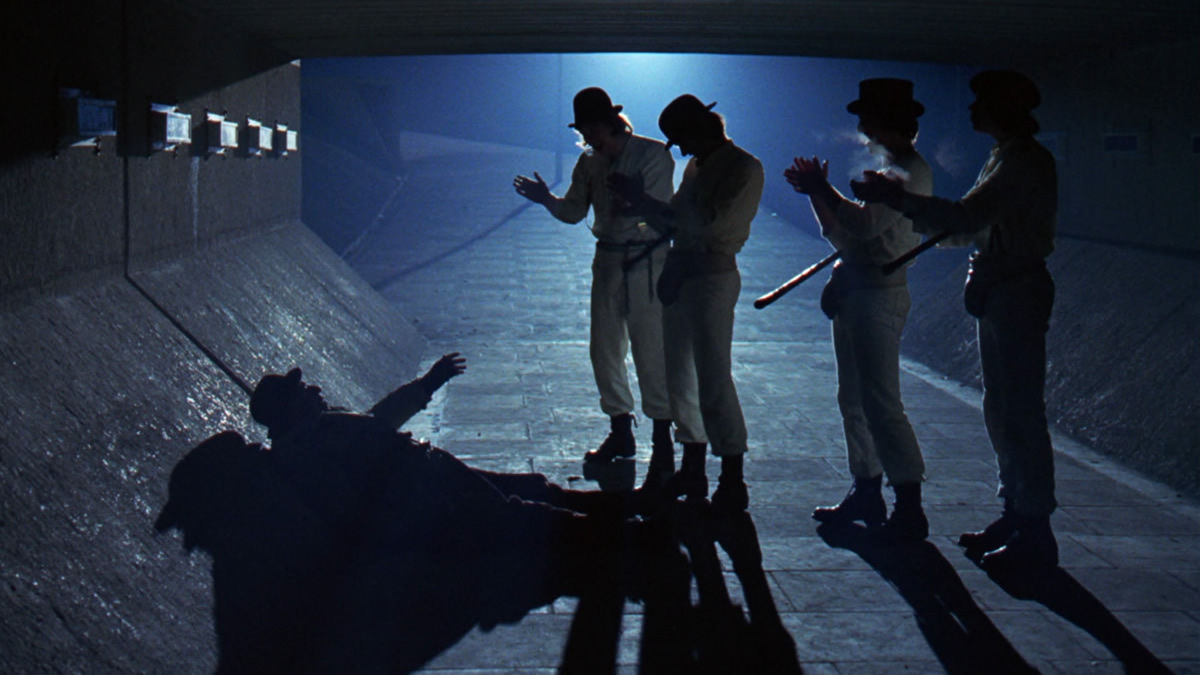 Violence is in every creature’s nature. It’s nearly impossible to subdue that urge to lash out in some way, and it takes an individual to stop themselves from unleashing an animalistic instinct to attack. Alex (Malcom McDowell) and his “droogs” in A Clockwork Orange are the very worst in the animal kingdom. The pack patrols the streets of a dystopian Britain to inflict chaos, rape, violence, and hostility among the streets all for their own pleasure. Without a care in the world, the droogs don’t give a second thought to what they’re doing. They act, never once thinking about the repercussions.

The film, as well as the novel by Anthony Burgess on which it’s based, is about what happens when we ignore what’s good and let evil tendencies come to life. As we see in many scenes throughout the film, the droogs find joy and excitement in their crimes. Their howling laughter as they invade a home and violently attack a couple is not only an iconic scene, but also a crescendo for the gang. Kubrick establishes what kind of people they are within the opening minutes. No matter how many times I’ve seen the film, it’s still unnerving to watch how relentless these people are, as well as how naturally it comes to them.

As violent as these characters are in the physical sense, they are also violent in other ways. An important aspect of the film is its various forms of art, and how they are connected to the violence. For example, Alex is infatuated with Ludwig van Beethoven, a man who could never hear his marvelous symphonies. Just as Beethoven was deaf, Alex is blind to the life he leads. We’re made aware of this blindness in different scenes, the first being the murder of the woman with a giant ceramic penis. He is shaken to the core by what he was done, and denies it with tears in his eyes to the police. He can stomach beatings, rapes, and other violent acts because the person is still alive. He can live comfortably knowing someone is in the worst pain, but breaks down when the act goes too far. Later in the film, during the famous experiment scene, his eyes are wide open with the inability to blink as he is made aware of how evil violence can be. The only way to make him see this is by associating it with something he adores: Beethoven. He is a man that can be torn down by what he loves.

The film’s other means of violence in art is found in various paintings, street art, and sculptures. Right out of the gate, at the Korova Milk Bar, we have naked female mannequins chained to walls to produce milk from their nipples, as well as being used as tables. They’re dolled up with makeup and colorful wigs, making the area more of an art exhibit than an average bar for the droogs to lay claim to. We also see various abstract paintings and photos of the human body being distorted, presented in uncomfortable circumstances. Kubrick is unrelenting in his portrayal of how violent art can be in any medium, not just his own craft of film. There’s no safe space for anything beautiful, as it is defiled by ugly neon wigs, violent acts, or creatures, specifically the snake’s head staring into a woman’s vagina in an enlarged photo on Alex’s wall. The film and Alex bring to light just how unsafe certain areas are that are very much ignored, mainly in religion. While in jail, Alex is fascinated with the violence in the Bible against Jesus and others, picturing himself in the “beauty” of it all. Alex is a presenter for the world to showcase how awful it can all be. Though it is a dystopian future, it also feels much too real at times. The world is on a string that, when disturbed by a light gust of wind, could break easily.

The ultimate question the film and novel ask is, what happens when you try to take away the free will of a man? Free will that constitutes what this person thinks, feels, wants, and loves. This free will can be taken away from any humble person, but in this case, it is taken from the worst. As much as we want Alex and others like him to stop, it is brutal to watch him become less than human. How far must a society go to take away the evil in it? In A Clockwork Orange, there might not be a limit to what they will do. There’s no answer to this, as the film’s ending can be interrupted in many ways. Even though the music of Beethoven is heard, and we see Alex in pain, his brain will forever have those evil thoughts. In the end, the real cure is to kill him. Maybe that’s the limit.