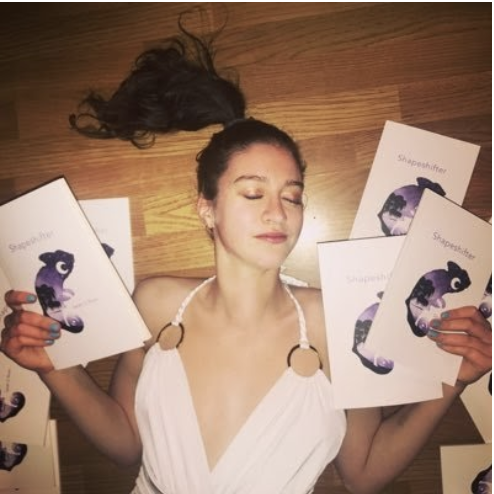 Sarah O’Brien is a poet from Woburn, MA, who founded her own literary magazine, Boston Accent in 2016. They publish poetry, fiction, and visual art six times a year, with a particular focus on uplifting underrepresented artists. Sarah and I talked about how she stays inspired and the most literary directions she’s most excited about, both in the greater Boston community and in general.

JC: How did you get into poetry?

Sarah O’Brien: I had access to poetry as a kid. I owned books like A Child’s Calendar by John

Updike and A Light in the Attic and Falling Up by Shel Silverstein. My family had a

me.) I went through a phase of childhood in which I said everything in rhyme, even

making up my own words just to rhyme them.

When my preschool friend moved away, I tried to write a story with her, in which

and forth. In elementary school, I learned about poetry. I won a poetry and fiction contest

in second grade. In third grade, I tried writing a book about a quirky teacher with a pet

tarantula. I wrote a lot of mystery stories. I read almost every book on the Children’s

floor of my local library, joined its Scrabble and book clubs, and even volunteered at the

been a source of power and intrigue to me.

I didn’t take myself seriously as a poet for a long time. Even so, I only applied to

colleges that had creative writing programs, and I took every poetry class that I could.

When I graduated from Providence College, I applied to five of the top fiction writing

graduate programs and got rejected from each. I took a job in publishing for a year before

JC: How did Boston Accent come to be?

SO: At my publishing job, I was severely underestimated. My role was publishing

assistant, and I found the job easy, so I had a lot of extra time on my hands. I began to

write and edit for the publication (without being compensated for such.) An article of

mine was awarded with recognition within the industry, and when the writer on staff was

set to retire, my coworkers assumed that I would be promoted to the writer position.

Instead, however, my boss condescendingly told me, “Stick to your role.”

So, I started Boston Accent because I was bored at work. I sketched out the concept

and began to brainstorm ideas. If my boss had believed in me then I may have never

gotten the chance to create such a wonderful project. (Also, I convinced my sexist boss to

hire my then-boyfriend as my Intern. I spent the rest of that summer kissing in the office

I quit the job soon after and waited tables for a bit before heading to the University of Nebraska to study poetry.

SO: Ah! There are so many amazing poets writing and living RIGHT NOW that this feels

like a magical time in literary history. I think that the Internet and social media has a lot

to do with that; it has given us more access to the writing community. Poems written

recently that stun me include “A Small Needful Fact” by Ross Gay, “The Palace” by

Kaveh Akbar, and “A Curious Souvenir” by Holly Pelesky.

JC: Do you have any writing rituals?

SO: Yes! I usually write in bed. Sometimes I write in coffee shops. Coffee is a big part of

my writing ritual, but sometimes I get carried away in my writing and forget to drink it. I

listen to music through headphones while I write, and it’s usually some kind of

If I’m feeling a creative block, I try to take a break. If possible, I’ll take a walk with

my dog because walking almost always inspires a new line of poetry or a new idea.

JC: Do you think of poetry as being politically powerful?

SO: Absolutely. Poetry is one of the most powerful means of expression. I have written

essays on the politics of love poems, especially poems that celebrate self-love. In our

current patriarchal political system, the most revolutionary thing you can do is love and

celebrate yourself. As a bisexual woman who has survived rape and dating violence, I

will continue to pour love into myself and fuel my creative process. I invest in myself

writing. Words are powerful, and words are meant to be shared with others.

JC: What is it like being creative in Boston – are there any specific places you like to

SO: I’m not as connected with the creative writing scene in Boston as I’d like to be. I do

go to a lot of readings and open mics. I try to stay involved by going to events such as the

my work, and I love going to the Cantab Lounge’s open mic in Cambridge on

Wednesday nights or The Bebop in Boston on Mondays.

JC: Are there any relevant social links/websites/chapbooks that readers can order?

SO: I would be so honored if people followed me on social media. I’m on Twitter

My website is www.sarahobrien.org and I update that with new writing each week.

Sarah O’Brien is a poet from Woburn, Massachusetts, USA. She wanders around the world meeting characters and creating art. Sarah published Shapeshifter, her debut book of poetry, in 2019, and she is currently working on her second book, tentatively titled This Is How I Stop Myself from Calling You. Learn more at www.sarahobrien.org

This Week In Experimental: Volume 54