Local DJ 7elucinations (aka Najwa Al-Aswad) has been making a splash on the Boston nightlife scene consistently over the past year. In addition to performing solo DJ sets across Massachusetts, Najwa is one half of the QTPOC-centric nightlife duo 3rdwavve, which throws bimonthly parties featuring local artists as headliners. Hassle writer Hassan Ghanny sat down with Najwa over coffee and biscuits to discuss belonging, diasporic identity in music, and 3rdwavve’s upcoming late night rave scheduled for June 29 at a secret location. (RSVP here.) 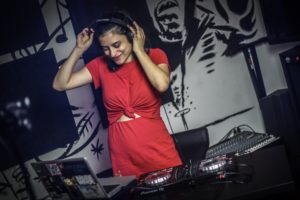 Hassan Ghanny: What does being a local artist mean to you?

Najwa Al-Aswad: I was born and raised in Massachusetts; my parents are from Lebanon. My parents came here in the mid-80s, [at] sort of the height of that civil war. They never expected to settle here, you know… their plan was to go back. My dad’s an ophthalmologist, so he wanted to serve people [in Lebanon]. But the civil war didn’t end until a few years after my sister and I were born — I’m a twin. So they ended up settling here. And I’ll always harken back to that story. Because sometimes I think of my family as the quintessential ‘model minority’ family a little bit… And I just have to be humble sometimes and just remember where we came from, and what we had to do to get where we are now.

HG: As a diasporic professional and culture creator, how has your diasporic identity shaped your involvement in music scenes in Boston?

NAA: Just in regards to music, and that kind of exchange… I can say at least doing 3rdwavve has been this experiential education for me. My business partner Teddy Valentine — he’s a black person of trans experience, and I feel like we’re always educating each other. For me, I’m telling him about my identity and what it’s like to have that immigrant heritage. And he also has his own unique story. [In terms of] the musical education between us…. we’re trying to curate this vibe that’s for everyone. I think through curating the music, we explore some of [those] self-referential processes in music.

For example, I’m trying so much more to incorporate Arabic music [into 3rdwavve]. And some of those [house/EDM] remixes will be by Black American artists from Detroit and Chicago, where those genres originated — but they have their own reverence and respect and love for it. It’s interesting for me to see that and want to incorporate it more when it’s already been through this self-referential process. I feel like it’s challenged my idea of purism. It allows us to be in a liminal space that makes the status quo, that shapes the status quo. And I think it can be a very revolutionary thing.

HG: Does this liminality have a resonance for queer and trans people of color who work in nightlife or otherwise are patrons in nightlife scenes? In the midst of oppressive social forces directed at QTPOC, where can our community find lightness and freedom?

NAA: Yes, yes. Absolutely. It’s really difficult to be in nightlife and to have a complicated identity. Unless it’s a POC-centered space, it’s for all intents and purposes going to be a white space. You definitely feel Othered, but for me, when I’m in those spaces that are white-majority — and I might be the only queer person of color there, the only queer immigrant there — it just makes me want to shine even [brighter], and not hide.

When I was first forming [programming for] queer and trans people of color — even though we’re in “liberal” Massachusetts, that’s something I had a real fear about. Even the first article you wrote about 3rdwavve — I showed it to my parents, but I had fears about showing it to my extended family because it had those labels of ‘queer’ and ‘trans’. It sucks because ‘queer’ doesn’t translate [even though] it’s actually part of Middle Eastern culture, and it’s something that was stigmatized and seen as disgusting as horrible [because of] colonialism. I had fears about explaining that to them, I had fears about this space being targeted — because this is a space I’m creating, I feel liable for the participants. But then, I think, once I see it all come together — and once I just see the joy that’s there — I think my fears are let go. My fears are relinquished. Because I brought joy to other people! So I absolutely see lightness in that.

Even though this is kind of an affinity-related space, the whole point of it is that, in that space, we’re unburdened. The whole point of it is that we’re unburdened by white supremacy, by queerphobia, by transphobia… Before my shows, I [try to] address everyone in the room and I tell them they’re safe, and I tell them that I don’t care about their immigration status, and I don’t care about their STI status. Because all those spaces that are not alternatives target people of those identities [in addition to] queer identities. I said that [at the Ballads and Bangers show] for the first time, trying it out on people… (smiles) and I was just DJing, and someone came up to me with something written on a napkin. It just said, ‘This is the best thing that’s ever happened to me. I fucking love you.’ Like, that was it! And, yeah, you can see how I’m smiling and lighting up just thinking about that. Again, it sounds really cheesy when I say that that’s a real form of currency, but it really is. It really is a real form of currency. And catharsis. 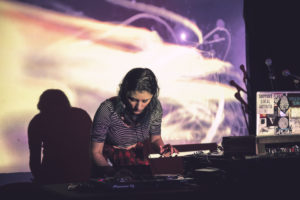 HG: In a Boston nightlife scene where many queer-oriented events are overly commercial or otherwise not accessible to all, what is 3rdwavve’s vision in creating an alternative space? How can a space like 3rdwavve foster connectedness against marginalized people in Boston?

NAA: We definitely want to put this idea out there that we don’t just care about you when you’re in the space… we do not want to be defined by a [physical] space. We just want to put this idea out that even if it’s remote, even if it’s virtual, we’re still this community. And it doesn’t begin just when the music’s playing. It’s constant, it’s contiguous. And that’s why I’m trying to get it to expand past just nightlife too… We’re not taking anything from this, we’re not trying to capitalize off our own community. Not that that’s a bad thing all the time — you do need to nourish yourself sometimes, even fiscally. But we just thought more about, like, this brand and this face of the event, and then we realized that we wanted it to be about the community.

This idea of buy-in is something that a lot of organizations, a lot of corporations want [from QTPOC overall]. And the buy-in, I think, just comes from the community and the personability, you know? We have a new membership program for return attendees. We just got an information hotline too — and anytime someone’s calling me on that Google Voice number, I’m picking up the phone. I want the voice-to-voice connection. I don’t want anything to be mistaken. I want them to know exactly what this event is about.

You have to be careful, you have to be discerning, and you have to hold people accountable. Because sometimes that presentation of a safe space is just that — a presentation. So again, you know… I think accountability is the difference between a performative safe space, and a real one that cares about learning and growing.

HG: What can we expect from 3rdwavve Volume 3 on June 29th?

NAA: A lot! 3rdwavve Volume 3 is gonna have Mick Beth and Anjimile performing. We’re gonna have some queer and trans dancers, we’re gonna have queer and trans vendors of color, vending everything from resin sculptures to body oils and crafts. We’ll have our own merch table, and something I’m really excited for is the virtual reality station. That’s gonna be amazing, and also done by Charity, a queer person of color. We’re gonna have amazing music as always by me and Teddy Valentine and LUNAMARIPOSA.

To RSVP for the upcoming 3rdwavve event on June 29, please purchase tickets via WithFriends. For more from 7elucinations, follow her on Instagram, Twitter, and Soundcloud for updates.

@jjohann.calderon will be our headlining DJ for my residency, @3rdwavve this #SATURDAY ? the 29th. Here is the official program for this installment. Call the hotline #6172864867 for more information.

Hassan Ghanny is a writer and music journalist based in Boston, MA. For more of his work, follow him on Instagram @diaspora.gothic.