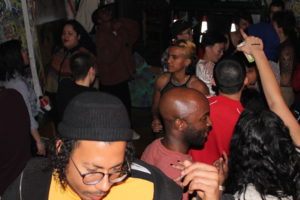 As 20gayteen (2018) has melted into 20biteen (2019), LGBTQ nightlife is in flux in The Hub. Cambridge’s gay male strip club, Paradise, closed in late 2018 to little fanfare; there are rumors swirling that Fenway staple Machine will be closing this year after celebrating 20 years of patronage in 2018. The fact that both of these spaces are located in prime areas for redevelopment is not a coincidence. In the past two years we have seen the birth of new queer nightlife spaces at smaller venues: Minibar’s SatHERdayz (Back Bay), BRASH at Brass Union (Somerville), Fresh Fridays/Fore~play at Fort Hill Bar & Grill (Roxbury) to name a few. But as more and more event spaces become targets for gentrification and displacement, queer happenings and happenstances in The Hub may very well be pushed from the pristine to the underground.

For the newly-launched monthly queer people of color (QPOC) fete 3rdwavve, this subaltern reality is an asset much moreso than a liability.

I arrived at the unlisted event venue on Saturday 1/26 not sure what I was getting into; I wouldn’t have been surprised had I arrived at the basement of a Knights of Columbus function hall or a proper warehouse rave either way. An door unmarked but for an address number brought me up three flights of stairs and through a corridor of an artists’ studio space. With the help of hasty arrows on the wall, I found my final destination: The Factory, a loft festooned with DIY art and bashment blaring on the sound system. Now, us brown queers love us some bashment and dancehall, when it’s in the right context. I can’t tell you how many times I’ve walked out of a mainstream (straight) establishment when a local (white) DJ plays a track that drops violent rhetoric around “chi chi man” and “batty man”. Here, though, the partygoer can seize the groove with little inhibition. 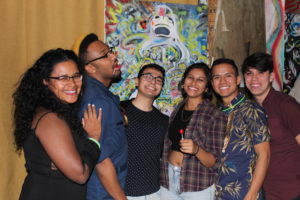 There is something to be said about moving one’s body intuitively that is essential for women and queer people to enjoy their nightlife experience. Women and femme-presenting individuals in male-dominated spaces have to worry about sexualization; gender nonconforming individuals across the spectrum often fear violence if not othering in spaces not delineated for a queer audience; for me as a gay man, I don’t even feel fully comfortable in overly-sexual gay nightlife spaces where boundaries and consent culture are not respected. At 3rdwavve, one can follow their intuition and simply move how one wants to move without fear. In what other space in Boston could you find Muslim girls in hijab popping to the beat, butch black women twerking, or gay men and they/them queers tearing the house up to Jersey club?

What music do QPOC like to get down to, after all? Right when I arrived, resident DJ Teddy Valentine (@notonlyadj) dropped an ominous set of tracks by QPOC artists back to back: “LMK” by Kelela, Kaytranada’s remix of “Kiss It Better” by Rihanna, and “1991” by Azealia Banks. By that point, a modest crowd had come out, and the dancing and carrying on was uninterrupted literally all night. A few musical highlights throughout the night included: “Rude Boy” by Rihanna, a New Orleans bounce remix of “Boo’d Up” by Ella Mai, “I Love It” by Kanye West & Lil Pump, “Suavemente” by Elvis Crespo”, “Pharoahs” by SBTRKT, and a trap remix of “If You Love Me” by Brownstone. As Teddy Valentine and second resident DJ 7elucinations (@7elucinations) traded sets throughout the night, the vibe effortlessly glided from global location to location in a manner fitting of a hyper-mobile and transnational Boston, covering the Afrobeats of Brixton, the bassline house of Leeds, the baile funk of a favela in Rio de Janeiro, and the chaotic digital bass music of underground DJs on both coasts. 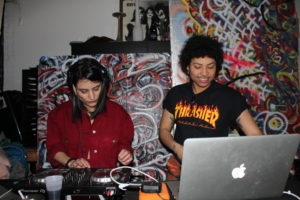 But if there were any accusations of global elitism to be made about this gathering, the feature performance by Dorchester’s own Harocaz (@harocaz) would easily put that fear at ease. Harocaz took over the mic at midnight, beginning her set next to the DJ booth and quickly coming to perform among patrons on the “dancefloor” of the loft. The local artist made her appearance in a patterned hypercolor dress designed by equally local design house MOBN$ (@mobnmobn). Harocaz is part of a tradition of local round-the-way girls who excel in party-friendly hip house, comparable to Rye Rye (Baltimore), Bluebone (Chicago), ZenSoFly (Raleigh, NC) and Kaleena Zanders (Los Angeles) among many others. In this vein, Harocaz performed a full set of floor-fillers, making sure to get in recent release “Lightnin” right away. During fan favorite “Blamma“, a patron jooked on the floor in front of Harocaz and received all of the hype in the room. 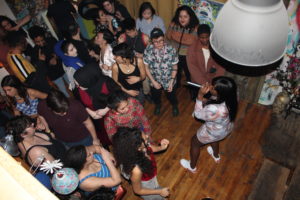 3rdwavve bills itself as “the future of Queer”, and that moniker is not so much a boast as a promise. First of all, for an upstart nightlife event to pack their space with upwards of 60 people on a cold January night is something of note. But past that, the vibe of the space was palpably refreshing. More than one person I talked to said the event felt “necessary”, like something that was so desperately sought after by those who attended which, yet, seemed like would never happen in Boston. Detractors of Boston, whether they be residents of The Hub or visitors, often say that the type of unfettered underground nightlife of places like New York — here’s looking at you, Papi Juice — just can’t come to pass here. 3rdwavve can prove the impossible really exists.

Be on the lookout for 3rdwavve’s next function, to be announced on their Instagram page (@3rdwavve). For more of Harocaz’s music, check out her Soundcloud or find select songs on iTunes and Spotify. 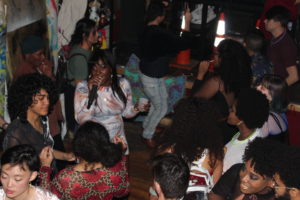 HASSAN GHANNY is an author and music journalist based in Boston, MA. He writes both fiction and nonfiction which focuses on the intersections of culture, diaspora, media, and identity. He is the author, narrator, and curator of DIASPORA GOTHIC, a multimedia fiction project around narratives of diaspora and migration. Hassan’s work has been published in print in The Caribbean Writer, and digitally on Boston Hassle, Cuepoint, INTO, and Burnt Roti. His essays are also available in the anthology SCORCHED RICE: Manifestos on Caribbean Diaspora Liberation. In his life as a spoken word artist, he is the winner of the 2018 Asé Slam. In the rare times he is not writing or on his phone, Hassan can be found cutting up at the local open mic, used book shop, or ethnic corner store.
Tags: 3rd wavve Vol 1., Harocaz, Hassan Ghanny, The Factory, The Future of the Queer