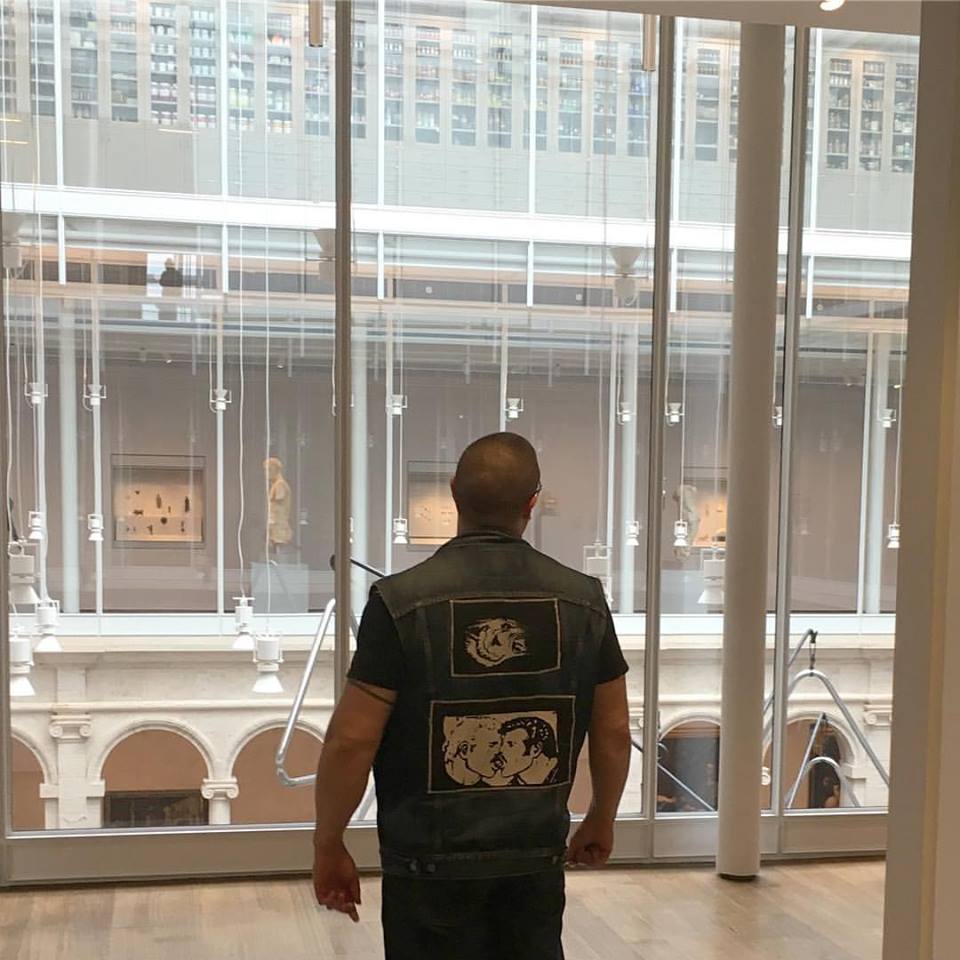 Michael Brodeur is NEW DAD. He is on tour right now. He is from Boston, but now lives in Houston, but he still writes for the Boston Globe. He is a talented guy who I’ve been a fan of in one way or another since I was a kid. Catch him performing in multiple places in the Northeast this week, including a highly anticipated stop @ Dorchester Art Project where his PLAYLAND concept (a social seance of sorts for Boston’s lost queer spaces) will play out this friday!

DS: You are currently in the midst of tearing through New England and the Northeast on tour, does it feel good to hit the old stomping grounds? Did you tour much around New England when you were living up here?

MB: It feels great but everything’s heavier in every sense because I’m old now. Boston’s so different; strong and cute and even more expensive than when I left. And I love seeing parties like Houseboi and Visceral keeping an underground open. Returning to something new can be sad if what’s new is bad. So much of what’s happening in Boston right now seems so hopeful and cool. Between Farleys and C, Sir, I saw my favorite parts of Massychoo and New England playing shows in different houses and halls, so coming back at 43 is all full of feelings. I also have no van this time.

I love the New Dad project. I love the bath house descriptor of your music. Is that a thing? How did you first get into house music?

Thank you! I love the Hassle. Bathhouse is a thing when I think about it, but not really. Bathhouses are one of those physical queer sites that have always held a kind of spiritual significance to me. I think it’s weird and incorrect when gay people try to claim house as something like their folk music (it’s not ours to claim, really), but I do think there’s a deep, real, meaningful spiritual capability to house and techno, and I think queer people in particular participate in that understanding of it in a way that’s both deeply personal and richly collective. “Tracks” have always been hymns to me.

My first encounters with anything resembling techno or house were via the weird little raves at Club 490 in Fitchburg that I had to take the commuter rail back out to from my Emerson dorm when I was just coming out in 1994. They were thrown at the same club on Main Street where I grew up going to see Dive and Overcast, so suddenly these contexts that seemed so far apart were all mashed, partly because it was the same sound system and it was shit. That’s been a big part of me not liking techno that sounds too clean or finished.

You’re in Houston now, how would you describe Houston’s overall culture of arts and music?

Houston is fantastic. It’s big and ugly and ends up being more beautiful because of it. There are still warehouses, so there are still warehouse parties. Body Drip throws raves you have to call hotlines to find. MAJÍA and Santa Muerte throw crazy dance parties with performance art interruptions. The hip-hop and electronic culture here is rich and weird, and where it intersects with queer culture here is especially interesting. It’s also a great city if you’re a visual arts person. Like, top three in the country great.

I’m probably the one who has changed. Boston looks a lot more glass and steely. It’s got that aggressive-expensively-cute thing happening that I watched devour Austin alive, and that instantly raises my hackles. But that’s all surface. The culture feels the same. I’ve been called “hon” by like ten older women in three days. A nice man helped me up the stairs with my case in Copley. Musically it actually seems more interesting now than it has in years, like Boston is molting its bar-rock exoskeleton.

Tell us more about Playland. Was this a long gestating idea? How did you come to it?

I find myself writing in a lot of ways about the loss of queer space, real and virtual. Even though it’s a dance album, “Former Eagle” is very much about queer loss –– it’s a list of strangers that ends at a kind of ambient grave. My next group of songs is moving into the virtual spaces where I cut my queer teeth, like the 976 numbers and group chat lines in the back pages of the Phoenix that I used to call all the time from my Emerson dorm; and “PLAYLAND” is very much drawing from that mid-90s era, when the rising cost of Boston was more of a threat to gay culture here than the approach of the Internet. Quest, Luxor, Napoleon Room, Chaps, the 119, Sporter’s, Playland – I watched them and others all shut their doors well before Grindr ever cut into things. So, I feel like finding and losing space (in both real and figurative senses) is a routine exercise of queer life, and it informs who we are and how we see things. I imagined “PLAYLAND” as a way to bring back some of the spaces – if not the bars themselves, then maybe the queer air inside of them, complete with its spirits.

We catch up with James Coarse – country & rock and roll musician and author of American Light Beer. Boston native now…

The gentle waves of guitar begin rolling in @ 8pm on sunday 11/15 @ 8pm on the Hassle Youtube.