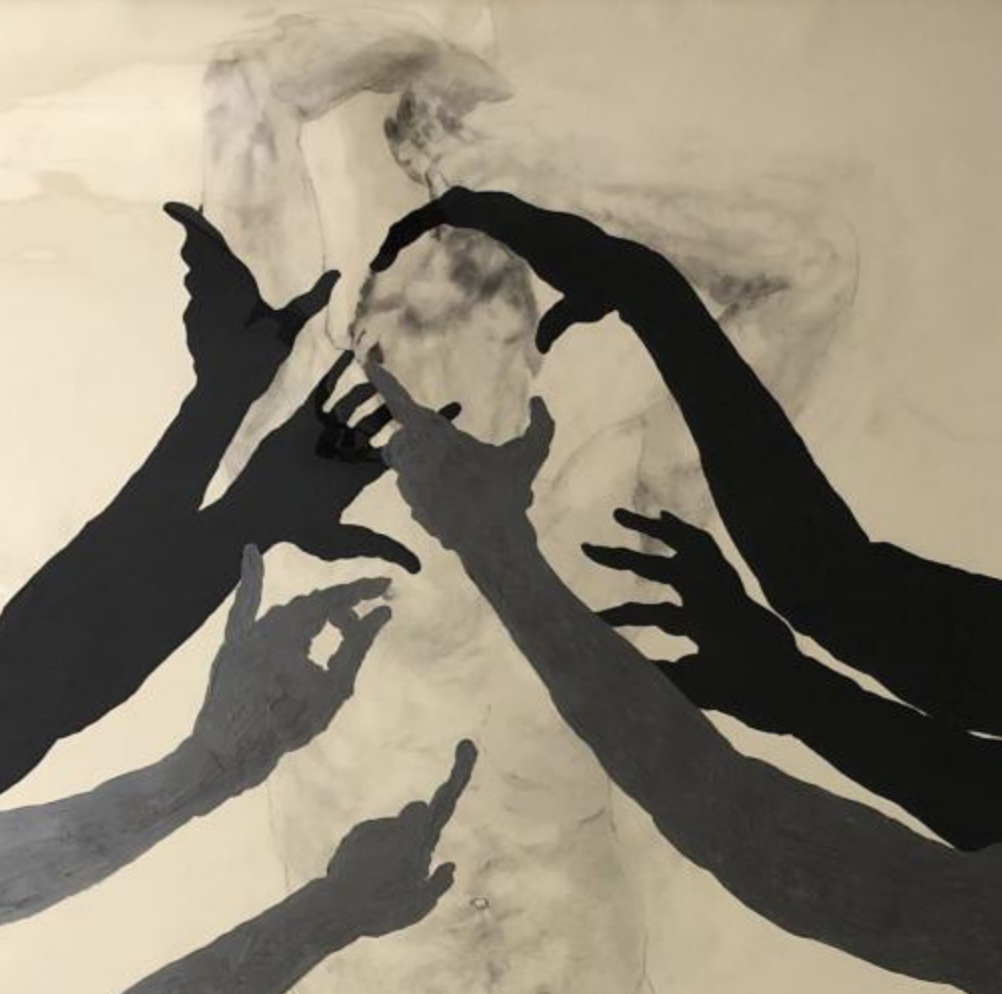 Beacon Gallery represents local and international artists at all stages of their careers, with a particular focus on art that raises awareness of questions of social justice. I spoke with the gallery’s founder and curator, Christine O’Donnell, about the current exhibition, Mixed Messages, which seeks to foster discussion around the topic of sexual violence and how this issue impacts everyone.

Boston Hassle: Mixed Messages, as the name implies, features a variety of artistic forms tackling different facets of abuse (sexual harassment, assault, intimate partner violence, emotional abuse, Trump’s comments about women’s bodies, and gender-based power dynamics). What would you say these artistic forms all have in common? What were you looking for as you curated this exhibit?

Christine O’Donnell: “Sexual violence” takes on so many different forms. From sexual harassment to rape, and from the lost memories of young children to PTSD that can last a lifetime, I gave myself permission, when curating this show, to find works that represented facets of an experience that could never be truly encompassed in one (small) show.

I do believe, though, that the Tiny Pricks Project (which is a public art project where the words of Donald Trump are sewn into vintage fabric) represents the aggressor, the perpetrator, of sexual violence. We have many “Grab ‘em by the pussy,” “Sadly she’s no longer a 10” and “If Ivanka weren’t my daughter, perhaps I’d be dating her” quotes in the gallery.

I feel that the Dress in Water series by Jean Sbarra Jones, Rachel Tine’s Invisible Fractures series, Ibrahim Ali-Salaam’s piece, “Enough,” Raleigh Strott’s cut paper abstractions, as well as the quilt square by the Social Justice Sewing Academy all give a voice to the victims, and while the Tiny Pricks Project is powerful, was extremely important to me, this exhibition felt like a space for contemplation on a difficult subject, where multiple voices all had a place. 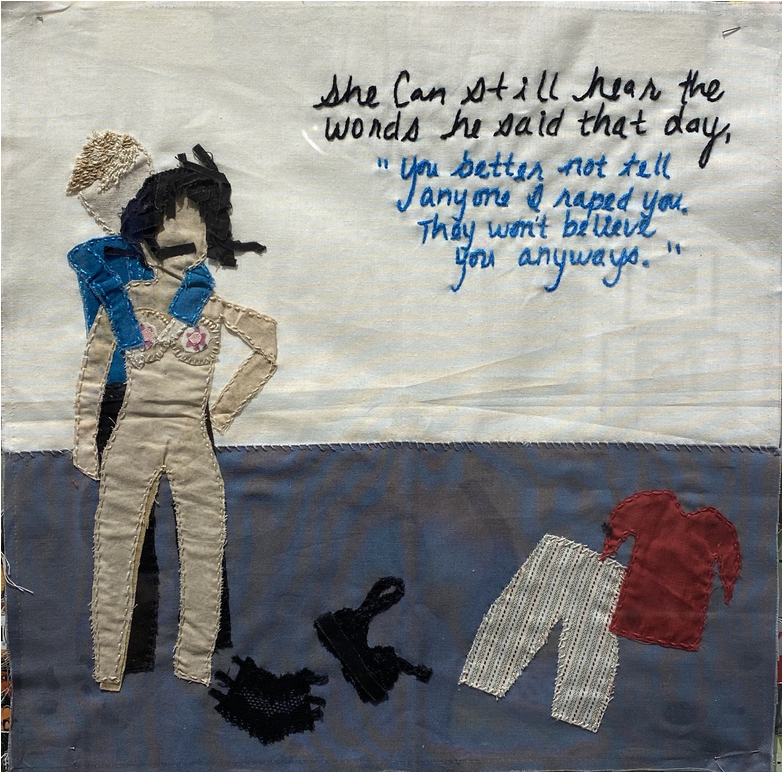 BH: Is this exhibition a departure from Beacon’s typical and past programming? If so, why?

CO: My gallery is approximately three years old. I started out with a mission of accessibility (art at reasonable price points, and a friendly, non-intimidating atmosphere in a business that seems to thrive on exclusivity). However, almost immediately, I was inspired to start programming around social justice. My second show was called Lives in Limbo: Refugees at the Gates of Europe, and was put on with the support of an amazing woman, Leslie Meral Schick, who goes to the Greek islands every year to support refugees who arrive there and are basically left in stasis for months–if not years. Causes like women’s rights, racial equality, and immigration rights have always been very important to me–even before I opened the gallery. I guess I shouldn’t be surprised that I couldn’t resist turning an art gallery into my own personal soapbox.

As a former educator, as well, I’ve realized that I’m happiest when fulfilling a mission of curating meaningful shows with a strong message. This message can be something that the artist or curator brings to me (like in the case of Photographing the Female, which was curated by Sarah Hoilund, or Nedret Andre and her passion for ocean conservation), or one that I arrive to on my own due to my interests and current events. My hope is always to inspire others to see both amazing art and to learn more–either from me, or thanks to something they’ve seen at the gallery.

BH: Your website says you intend “to bring an increased awareness to sexual violence to foster discussion…” and that “it’s time to bring that which is often kept in secrecy and darkness, out into the open.” How do you want that discussion to look?

CO: I think the discussion should happen in whatever way the artists and supporters of the gallery wish it to occur. For example, I have had walk-in visitors make personal disclosures upon hearing the theme of Mixed Messages. This has lead to some very meaningful conversations. Sometimes being willing to listen to the trauma or pain of someone else is all we can do.

In the same theme of bringing awareness to sexual violence, I am also honored to be having a discussion on Wednesday August 12th with Michelle Bowdler, the author of Is Rape a Crime? Her new book takes a look at her [sexual trauma], and how the lack of prosecution intersected with our society at large, and a lack of accountability. I see this conversation as another opportunity to discuss this difficult subject. This show isn’t perfect, and it’s not a panacea–it’s simply a small step (I hope) towards bringing a difficult conversation into the forefront of people’s minds.

BH: What has it been like running a gallery during the pandemic?

CO: It has been tough running an art gallery during the pandemic! We were closed from mid-March through May, and are now open by appointment except for Sundays. We’ve had to learn new ways to do things, and are working hard to keep our visitors feeling safe.

Much of the art world is shifting online, and we’ve done some online shows, but I’m confident that there’s a future for physical art galleries as well. I find so much meaning in curating physical shows within my space at Beacon Gallery (and in other spaces when I’ve had the opportunity); I’m hoping to ride out the pandemic and see the other side of these difficult days.

BH: How do you think the issue of sexual violence intersects with the current global health crisis?

CO: The global health crisis has forced many more individuals to stay home, which means that for anyone whose abuser is within their household there is nowhere to turn. Reports of abuse may be going down, but more likely than, say, less child abuse occurring, it’s more likely impossible to report. As much as COVID-19 feels like a new normal (and is, in certain ways), it has also sent shockwaves through society with traumatic effects that will be felt for years.

BH: Many of the artists in this exhibition understandably feature the “female” body in their art. But some of the artists and collectives you’re featuring (e.g., Social Justice Sewing Academy, Tiny Pricks) don’t focus on any physical forms. What do you think is powerful about some parts of this discussion remaining un-embodied?

CO: Before the exhibition opened, a few of the artists and I attended a Boston Area Rape Crisis Center (BARCC) online workshop regarding how best to support victims of sexual violence. One of the things mentioned was that you should not focus on “what happened.” Such details are for the victim to disclose, if they so choose. It’s much better to focus on how the individual is doing now.

Similarly, in putting together this exhibition, I liked the idea of using words and discarded dresses as two main symbols that would bookend the show’s narrative. This concept is punctuated by pieces such as the Social Justice Sewing Academy’s powerful words and image in the quilt square as well as Ibrahim Ali-Salaam’s piece which identifies the places and ways in which he has been assaulted.

I wanted to give space for those who come in to think, to contemplate and to have a discussion. The environment needed to give visitors the emotional breathing room to do so. Thus, while the show is intense, it’s not meant to overwhelm nor upset.

Beacon is physically located at 524B Harrison Avenue in Boston, open from 11-3 PM on Sundays, as well as by appointment. Mixed Messages is on display through August 30th, and will be supported by resources from the Boston Area Rape Crisis Center (BARCC) for anyone who needs them.