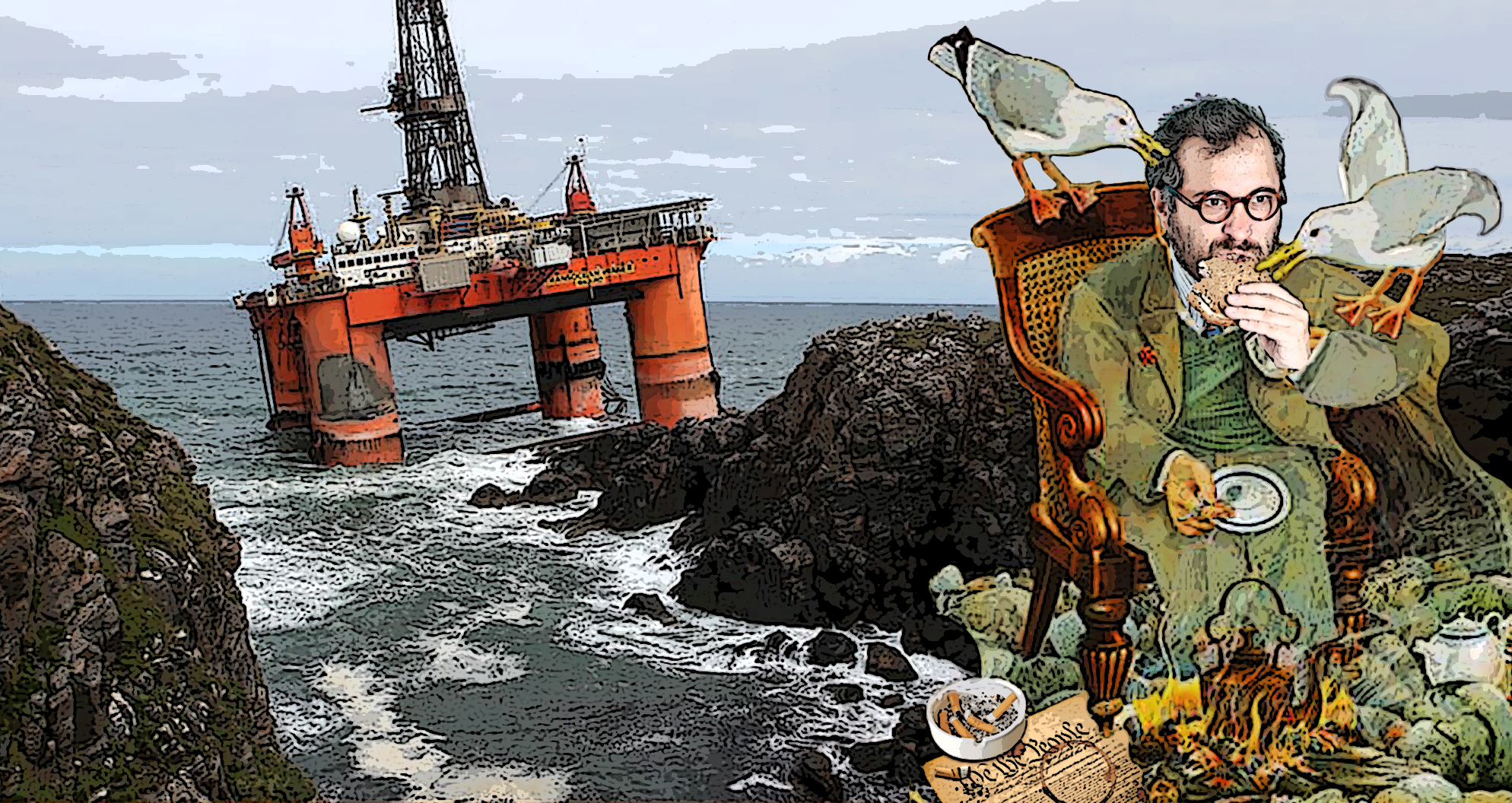 SO I THINK IT’S FAIR TO SAY that our lives have changed a lot in the past year! But I bet mine changed more. No offense, but how many of you started your own breakaway micronation in the middle of the Gulf of Mexico? Thought so.

I kind of…didn’t mean to exactly? You know how that goes. Like, you wake up in the morning thinking it’s going to be one kind of day (shower, work, go out to chop down some trees with your buddies) and you wind up with a TOTALLY different kind of day (shower, work, accidentally fly to Houston and found a libertarian republic on a disused oil platform 200 miles from the coast of Galveston, in a spot of water that neither the US nor Mexico wants to claim because it smells “like if dead sharks were made of licorice” according to the Navy).

Well, needless to say it’s a “heavy lift” as my old boss at Genzyme would say (If you’re reading this Rich, uh…sorry I bailed on our afternoon meeting but I accidentally founded a country during lunch). So in the name of international friendship, I figured I’d share a few lessons learned or “best practices” if you find yourself in the same sitch.

#1: Be prepared!
Life’s what happens when you’re making other plans. So right now, even if you don’t think you’re ever going to be starting a whole new country from scratch by accident on your lunch hour, you should think about what kind of government you’d want if you did.

Let’s just say that if a famous libertarian citizen of yours, for example the dude from Blues Traveler, says he can “definitely” set aside one weekend a month for voluntary national guard rotation just…yeah just take that with a huge fucking grain of salt, OK? Thanks for nothing, “General” Popper!!!!

#2: You get what you pay for.
Whatever building you keep your constitution in, you gotta seagull-proof it. You just gotta.

I dunno, maybe this advice isn’t that useful to every brand-new nation. Out here in the Gulf though, these seagulls are wilding, man. They will steal anything.

The first day I was out there, I was eating some Quizno’s I’d flown special to Houston for and a damn seagull swooped down and took it right out of my hand. Damn! You know that story about how the Aztecs saw an eagle on a cactus eating a snake and that’s how they knew where to build their capital and now it’s on the Mexican flag? Well, that’s why a seagull eating a chicken parm on top of a rented helicopter is the center of my country’s Great Seal. At the time it seemed like a good omen!

Yeah well flash forward like three weeks. I paid a calligrapher like $300 to scribble up a nice copy and even paid an extra $40 for those big s’s that look like f’s. That doesn’t sound like much money, but you try paying for someone to write a constitution based on the taxes you can get libertarians to pay. Feeling proud and solemn, we installed in our Hall of Freedom Written Down.

Now, the Hall of Freedom is actually a tool shed I got at Lowe’s and paid to have shipped to our oil platform. It seemed good enough. Yeah, well, forget that. Imagine my surprise when I walked into the Hall of Freedom Written Down to discover that not only was a seagull in the middle of eating our constitution, but that it had barfed oyster shells all over the carpet. Lotta money down the drain, man. In the end, an extra $50 for the better toolshed made of aluminum would have actually saved money long-term. Learned a lot about infrastructure that day!!!

#2b: Back up your important documents.
Funny story. By backup I don’t mean “tattoo a copy of your constitution on your friend Nikos’ back.” I mean like, Dropbox!

See, the first person I convinced to become a citizen was my buddy Nikos. He’s one of the dudes in my tree-chopping team back home that I was talking about before. He liked our constitution so much that he offered to have it tattooed on his back. Now, I’m not an idiot. I knew it was important to have a few copies of our constitution in case something happened, but the calligrapher and the shed really put a dent in our Treasury. But Nikos was going to pay for the tattoo himself, so I figured I could score a few points with our shareholder-voters by showing this off as a public-private partnership. They love that stuff, man. I’m a real Charlie Baker over here.

Now, Nikos is pretty hairy. Greek dude, you know? I’m not judging. I’m Italian. I’m notexactly a dolphin over here my own self. But Nikos…holy cats. I bet otters nest in that kelp he keeps under his shirt. Anyway, I was like, “That’s awesome, Nikos but…I mean I’ve never seen a constitution covered in that much hair before. Like, not even at art shows.”

Well, suffice to say me and Nikos have pretty different ideas about what counts as “often.” Let’s ignore the fact that until I get that new copy of the constitution printed Nikos has to be there whenever the government has a meeting so we can check the rules. Because the real problem is that actually making out the words underneath the bathmat on this dude’s back is some serious legal scholarship.

#3: You get what you pay for, part deux.
Landlines. Soooo 90s, right? Yeah, that’s what I thought. Again, this one started when I thought I’d save a little Do-re-mi. That’s not me trying to sound like the Rat Pack, by the way. That’s actually the name of our currency. Most of my cabinet was big into a cappella at Dartmouth. Anyway I thought I’d save some some Do-Re-Mis and not bother getting a landline put in. I can handle whatever business over Skype I figured.

Well, the day came when we had to register our name. I tried to pull up the website for the registrar we use (www.quicknationbuilder.com) and found our internet was down hard. Turned out a crested grebe had built its nest on our wifi thing and eggs and feathers and poop had gotten into the air vents and it was just fucked.

“No big,” I thought, “I’ll just use my cell.” Yeah. Great idea, genius. Cell phones aren’t really made for the conditions you’ll find on an elevated platform hundreds of miles out to sea. I get a signal OK that’s not the problem. It’s just windy, dude. Suffice it to say I managed to call the sales reps at quicknationbuilder, but thanks to all that wind noise and the crashing waves when I told them our name was “Liberland” — which means “freedom” in Latin and “land” in English — a rowdy gust of wind kicked up and the lady on the other end heard “Liverstan.” By the time I figured it out they’d already sent us the letterhead and envelopes and tshirts and military patches with that name so I just had to live with it.

That’s our name now. Liverstan. Awesome. What a great name for a country.

Telecom infrastructure is what I’m saying here. Get a landline. You’ll save money in the end.

#4: Sometimes you have to be the bad guy
So I already talked about General John Popper from Blues Traveler, who’s kind of a pain in the ass.

When we did the official recording of our national anthem, he volunteered be the singer. So on the day of the session, I set up Garage Band in the office and here comes General Popper, drinking like this giant beer stein full of milk. Like, just nasty. That didn’t sit super well with me. In my head I’m like, “Dude. Come on. Be a professional.” But at the same time I was worried that he’d throw a hissy and not do the recording. So I didn’t say anything. I needed a win, you know?

Sure enough, he was phlegmy like whoa when he sang. Each take just got worse and worse. By the end it sounds like he’s gargling rubber cement. Just totally nasty.

For all I was worried that he would freak out and not do the recording, I wound up in the same place anyway. Couldn’t use the recording at all. Plus I had to listen to like every ounce of slime in this dude’s body. Which is a lot. I don’t know if that’s from harmonicas or what.

Nikos has an old flip phone because he’s a cheap ass bastard, so we just programmed the anthem in midi and added it as a ringtone to Nikos’ phone. Now, when we have an official function like a state dinner or chunking rocks at the seagulls, we just call Nikos and blammo: national anthem plays. It’s a little weedy sounding, but whatever.

Still, would be nice to hear the words. Assert yourself sometimes. That’s what leadership is.

#5: Get your ducks in a row before you announce your presence
We were so psyched and freaked out by everything that as soon as we’d registered our country’s name we had a big party and waited too long to register the internet domain. Big mistake. Shoulda done that before the party.

President/Founder of the Intensely Free Republic of Liverstan (REQUIRED LEGAL DISCLAIMER: no relation to www.liverstan.com LLC, the #1 internet source for young studs discovering the joy of foieplay).