In the down evenings of Mondays and Tuesdays, nights whose lack of excitement tends to drive restless young professionals to bar trivia nights, Boston moviegoers can now take advantage of nights at the Brattle Theatre, where the public can see old movies which harness the gloom of cities after dark. Film noirs old and new, some on 35mm prints and some on digital remasters, feature at the Brattle all summer long. This is the sixth part in what has become by this point an exhausting appreciation of all things noir, grouped into weekly double-features, meaning both films listed play Monday and Tuesday, back to back, at a discounted rate.

The celebration of 75 Years of Noir began in 2015 and has continued through the summer of 2016. Given that the noir phenomenon is signposted by emblematic works rather than fixed moments, it is fitting that the Brattle is celebrating the 75th anniversary of 1940-to-1941ish. Rebecca (1940) or The Maltese Falcon (1941) may be A-list markers of noir’s beginning, but the dark tendrils of the genre’s weirdness reaches back to fragments of many films from before, with You Only Live Once (1937) or even Shanghai Express (1932) providing high-profile examples. It also reaches beyond its supposed historical scope of ‘40/’41-to-‘57/’58 into films across time, as the 75 Years series continues to demonstrate.

The current slate at the Brattle looks further forward than the early noir entries, with emphasis on the femme fatale. Many films in the genre gravitate around smoldering women, who draw forth from the (usually male) leads their crippling malaise, various sexual pathologies, and nebulous sense of self. As tends to be the case with academic terms, the received wisdom on the femme fatale is often divergent from the real identity and power of many of the genre’s female characters (outside of maybe Double Indemnity (1944) and Gilda (1946,) whose female leads have come to define the archetype.) The role of each femme fatale is necessarily unique to each film, for the genre is in part defined by the use of film style to illustrate the idiosyncrasies in a protagonist’s mental state. The programming of this series goes a long way to provide as full a picture of the femme fatale as possible.

Two double features have already transpired: a Robert Mitchum double in Angel Face (1952) and Out of the Past (1947), and a Robert Siodmak double in The Killers (1946) and Criss Cross (1949). I admired Angel Face, where Otto Preminger’s style matched Robert Mitchum’s (and the rest of the cast’s) somnambulistic mannerisms to embody the spiritual rot of the idle rich with arresting frankness. And Out of the Past is a masterpiece, full stop. Robert Siodmak is the noir director who most closely and consistently embodies the visual style we have come to associate with film noir, though I believe that 1944’s Phantom Lady – which played the Brattle earlier in the series – is his high point. At least The Killers has sweaty Burt Lancaster writhing on a bed. Can’t beat Old Hollywood. 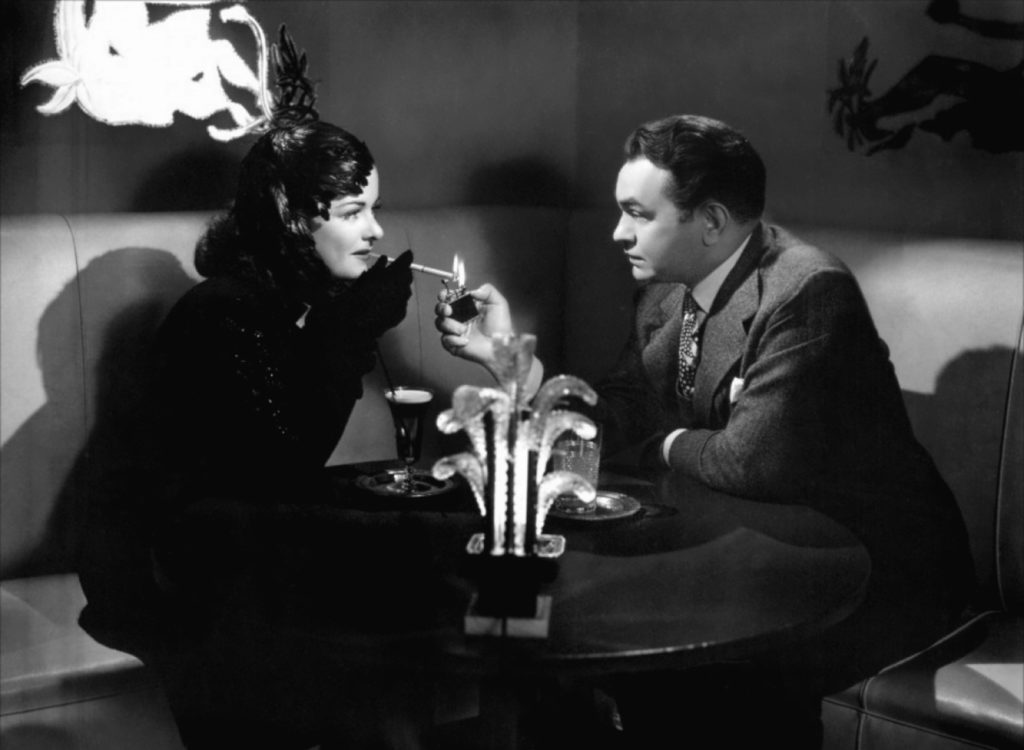 One day only – a 35mm double of mid-40s “The Woman…” efforts from two of the undisputed masters of cinema: Fritz Lang and Jean Renoir. Lang may well have been the great noir director, consistently creating hostile worlds within his films, characterized by narrative and literal architectures of doom. As such, The Woman in the Window (1944) continues to frustrate audiences pulled and played by its narrative twists and turns. The French filmmaker Renoir, on the other hand, came to noir only briefly during his short stint in Hollywood, but his American works are regarded as no less the works of a major artist, and don’t screen very often. However, it should be said that in a great noirish twist of fate, two of Renoir’s five American films screen on 35mm in Cambridge in the same week (The Southerner (1945) plays at the Harvard Film Archive on July 31st at 4:30 PM.)

Though this may be a series dedicated to deadly women, it should be noted the first six films boast staggering male talent, with Mitchum, Lancaster, Edward G. Robinson (Window) and the great Robert Ryan (Beach.) 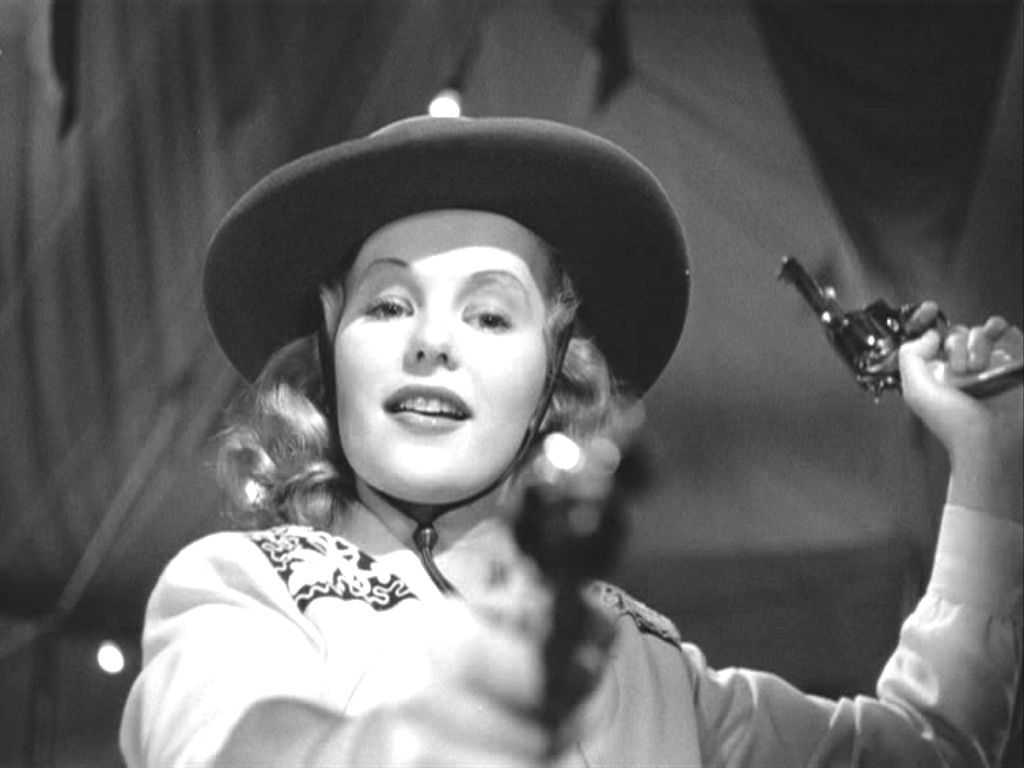 The can’t-miss screening of the series is a 35mm showing of Gun Crazy (1950). This (admittedly canonical) noir is only held back from being mentioned in the exact same breath as The Maltese Falcon, Double Indemnity, or Touch of Evil because it is B-grade and dirty to its core. Director Joseph H. Lewis finds profane poetry in a minimalistic, yet sensationalistic style. Governed by budgetary restrictions and the requirements of a bank-robbers-on-the-run narrative, Gun Crazy is as mechanically precise and loaded with double meaning as the gun, the item around which the film revolves. Peggy Cummings’s upfront blonde out-Stanwyck’s Stanwyck, and Cummings revels in her fatale’s sleaze.

Born to Kill (1947) is a curious double bill, and this author will be delighted to experience it for the first time. Completely ignoring the series’ focus on great female performances, I would like to again note the presence of a male performer, this time Elisha Cook Jr. You’ll know who he is when you see him; Cook always played a nebbish sucker, looked like a dog-track Henry Fonda, and was a character actor without equal (Phantom Lady, the Siodmak film from earlier, has its show totally pilfered by Elisha Cook Jr in a brief supporting role.)

Prolific journeyman Robert Wise moved from editing Citizen Kane (and defiling The Magnificent Ambersons) to cutting his directorial teeth on a few acclaimed films noirs like Born to Kill, before going on to direct The Day the Earth Stood Still (1951), West Side Story (1961), The Sound of Music (1965), The Andromeda Strain (1971), and the first Star Trek movie. Let no man say Wise did not take risks. 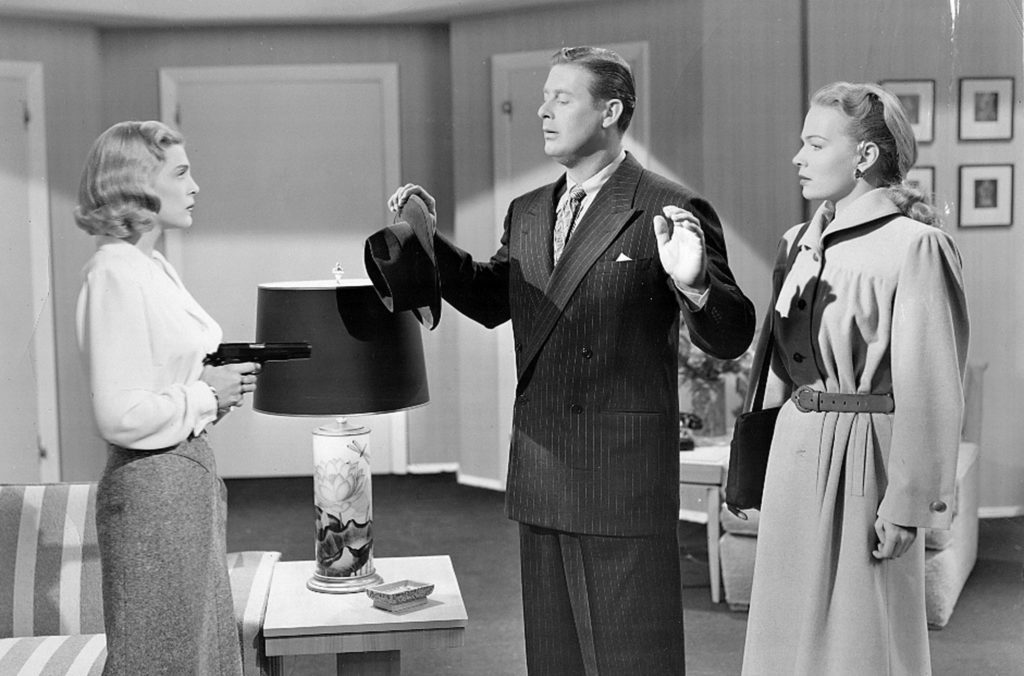 A good repertory series should strike a careful balance between the established great films that provide the viewer context, and the deep cuts which enrich the viewer’s understanding of the time period or filmmakers that the series celebrates. The repertory programmer has often been the savior of forgotten or lost films, championing great works whose acclaim was unfairly denied up until that point. For the viewer, rediscovering an old film on an old print in an old theater, especially on little more than a hunch, is a tremendous experience, the heights of which can rarely be reached by other kinds of screenings. This is the author’s diplomatic way of saying he knows nothing about either of these films. Lizabeth Scott, Dan Duryea, and Humphrey Bogart are worth the price of admission, though. 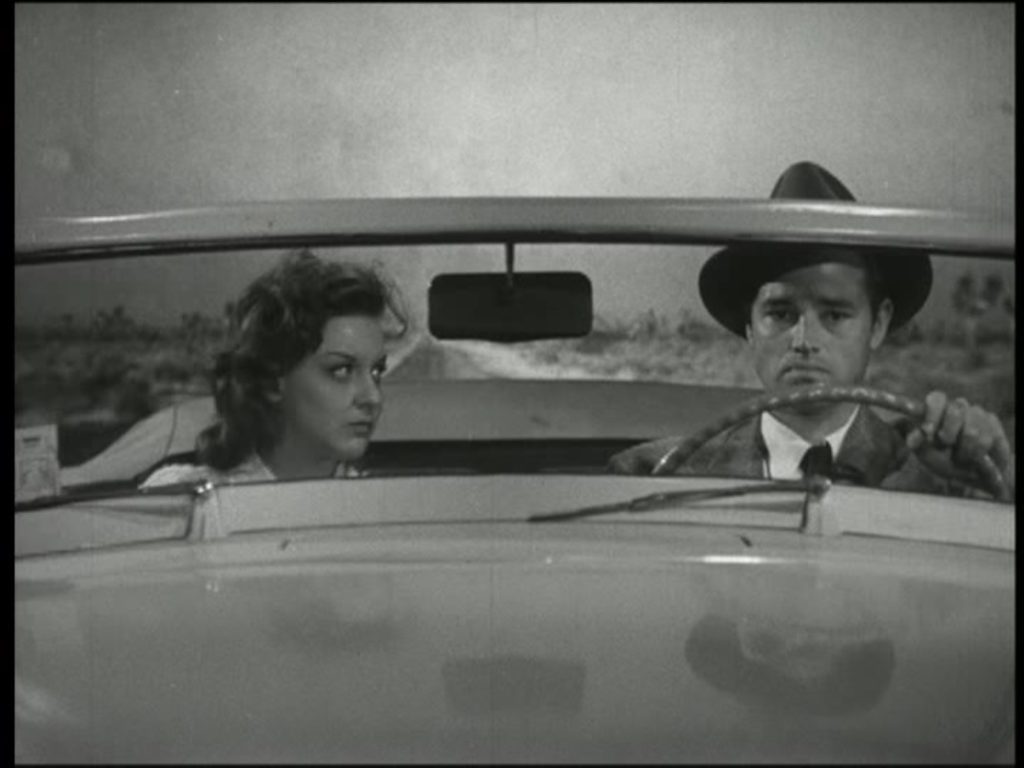 My feeling on Double Indemnity’s (1944) reputation is that it mirrors the style and art decoration of the film itself – it is puffed up and glamorous, but such glamour is tawdry and lacking in the center. For a genre which probes deep into the messiness of the damaged human mind, Double Indemnity ought not be a standout example; it paints with lines too clean and (literally) telegraphs its meaning. It remains an object of eternal acclaim, but I like my noirs to be more like Detour (1945). Predating Gun Crazy, the film is a lean, glamor-less road movie, but one which harnesses the poetic resonance of lonely souls on a nighttime highway with the messiness that the unreliable narrator at its center requires. It is a 67-minute head trip, the likes of which you could only get away with in Hollywood when the stakes were B-movie low, and hiding your cheap set meant surrounding your protagonist in a haze from a fog machine, which suggested both the encroaching presence of guilt and the law, as well as the distortion of reality that came with being a broken man. Detour is art. 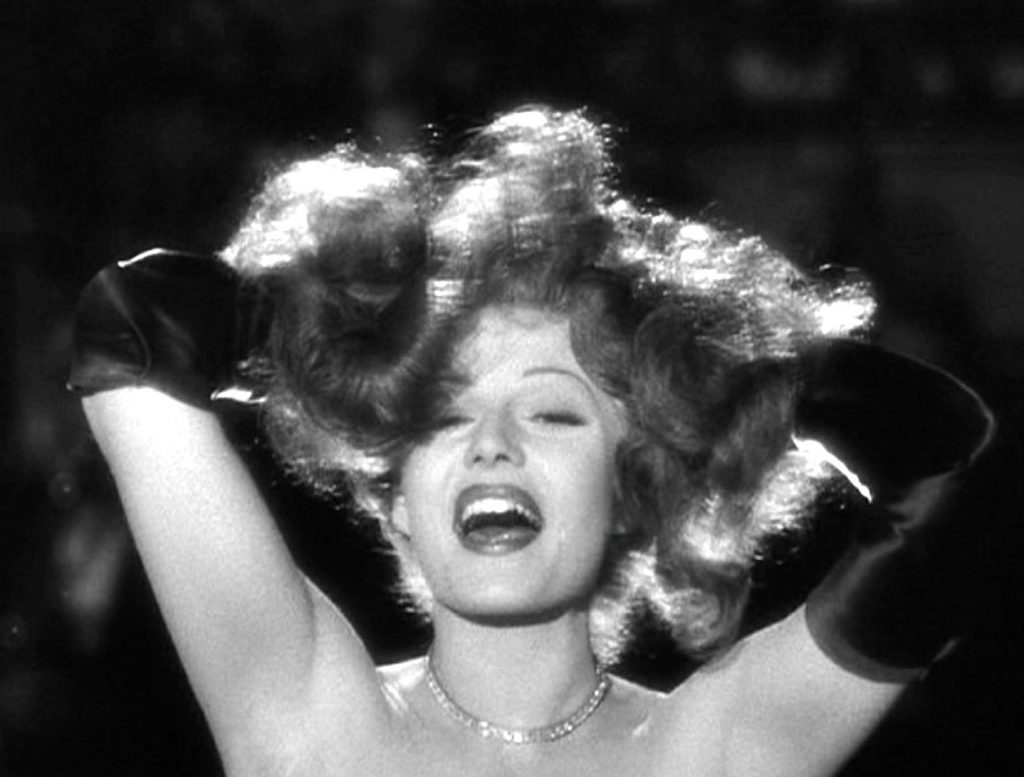 At least a couple days are due to these seminal paeans to Rita Hayworth and her two most famous femme fatales, among the better and more nuanced of noir’s female leads. Both late-40s works are remarkably similar, featuring rudderless souls adrift in the far reaches of the planet brought to port by the treacherous lighthouse of Rita Hayworth. In The Lady from Shanghai (1948), she is one of the shifting points of focus in a totally disjointed Orson Welles venture. The film is an iconic noir in part because its uneven tones reflect its phantasmagoric approach to reality. The film, mutilated by the censors, is rightfully distrustful of expectations and apparent reality. Rita Hayworth is blonde in it.

Gilda (1946) is the more polished product, the star maker, yet has no right to be as perverted and shifty as it so often is. Rita Hayworth’s introduction, both to the film itself and to the audiences of 1946, is shown in slavish style yet is entirely self-aware. As the three angles of a love triangle rattle off their potboiler we-share-a-darkand-stormy-past dialogue, the film proves extremely judicious in how it cuts within that scene and uses overlong close-ups to stack Rita Hayworth’s star power. From that point on, the wattage only increases, and Gilda rises to meet the challenge. 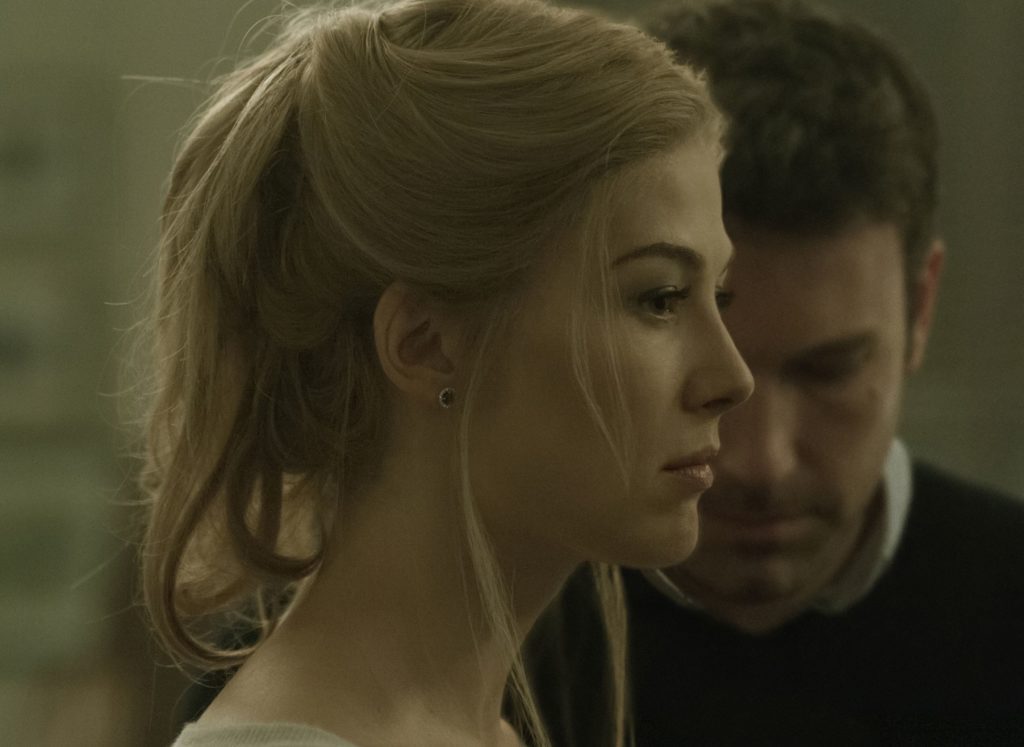 Unexpected inclusions have been a key strength of this series throughout the year, and it is no different for this canny double feature of Leave Her to Heaven (1945) and Gone Girl (2014). Though they appear different – Gone Girl’s David Fincher directs in four or five colors, and Leave Her to Heaven features every single other one – both have a jet-black sensibility. Their femme fatales are as dark hearted as they come, the yardstick by which we measure other femme fatales. Rita Hayworth’s characters are noteworthy because they’re a little nicer than Gene Tierney in Leave Her to Heaven. Gone Girl, like all Fincher films, actively inflicts pain on its viewer. Fincher’s works are so deft in their mechanics of doing so that his body of work remains intermittently masterful (Zodiac is a great, great noir.)

Gone Girl, whatever your feelings are on it as a film, is a wise choice to mark the end of the series. It’s a film noir, a neo-noir, and not in the facile hat-putting-on way of LA Confidential or Brick. Gone Girl doesn’t need the surface trappings of noir as we knew it to communicate in the subconscious language in all of us that noir tapped. Ending the series on a movie of the moment like Gone Girl reminds us that certain types of films have always warped us and impacted us in an extremely deep place. The academic understanding of where they fit in the facile narrative of film history has precious little to say on what these kinds of films have always done to us. There is no putting these films noirs back on the shelf, confining them to jars, even in appreciative film criticism. They follow you out into the night.

Tags: Born to Kill, Brattle Theatre, Dead Reckoning, Detour, double indemnity, Femmes Fatale, film noir, Gilda, Gone Girl, Gun Crazy, Leave Her to Heaven, The Lady from Shanghai, The Woman in the Window, The Woman on the Beach, Too Late for Tears