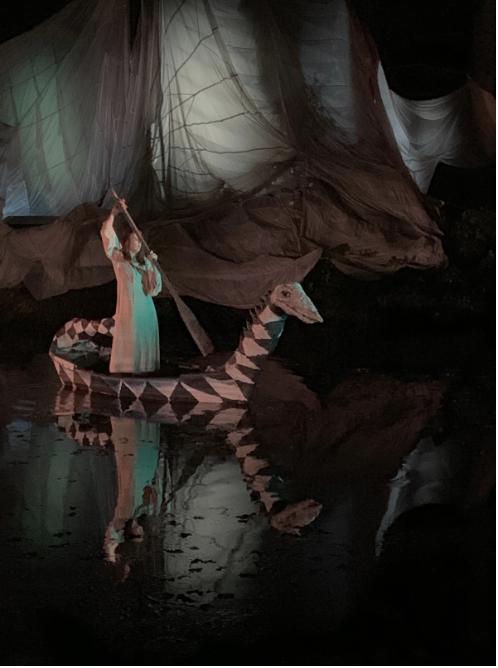 Double Edge Theatre (a feminist experimental ensemble in Ashfield, MA) mounted two stunning spectacles about Anglo-Mexican surrealist painter/writer Leonora Carrington. Of the two, Leonora & Alejandro is a more traditional play, pairing Carrington with Polish-Mexican visionary film weirdo Alejandro Jodorowsky, who looked to Carrington as his surrealism mentor.  Leonora’s World is a choose-your-own-adventure maze through living tableaux inspired by her artworks. Carrington’s art is cool as shit and more popular than ever, now that mainstream culture is making modest inroads into recognizing, canonizing, and lionizing visual artists who are not cis men–and as mysticism, symbolism, and tarot resonate with new generations.

Fave Arty Blog: WONDERLAND, Greg Cook Year-round 2019
Wonderland turned me on to the Leonora Carrington productions above. This blog’s a great complement to reading the Hassle and other cultural calendars for finding off-beat happenings, especially at the intersection of DIY arts and activism.

Is it about the bunny? No. Spoilers to follow: Twin Peaks: Way back when, you demanded closure and found it was unsatisfying AND it ruined the show; now you’ve brought it back from the dead to get better closure but  it’s a real Monkey’s Paw zombie kinda situation. Mulholland Drive: actress hires hitman to kill fickle girlfriend, has fever dream while dying miserably. Wild at Heart: guy kills cheating wife. Dune: just shoulda been Jodorowsky’s Dune*–don’t bother. But do watch this Dune clip to marvel at the many ways Sting can yell “I WILL KILL HIM”:

And do watch Jodorowsky’s Dune to imagine Salvador Dalí, Orson Welles, Mick Jagger, H. R. Giger design, and dueling soundtracks by Pink Floyd (House Atreides) and Magma (House Harkonnen). To be a science fiction fan is a kind of curse where you walk through life dreaming of movie adaptations of your favorite books just to see the disappointing results and immediately wish the movies out of existence. Which is kind of what David Lynch is trying to say with Twin Peaks: The Return. PS: Episode 8 of Twin Peaks: The Return (2017) is still a masterpiece.  *Oh yeah and Logan Echolls fucking dies in the Veronica Mars sequel, July 2019. My friend who lived in Tokyo claims the Japanese would have titled this show Teenage Detective 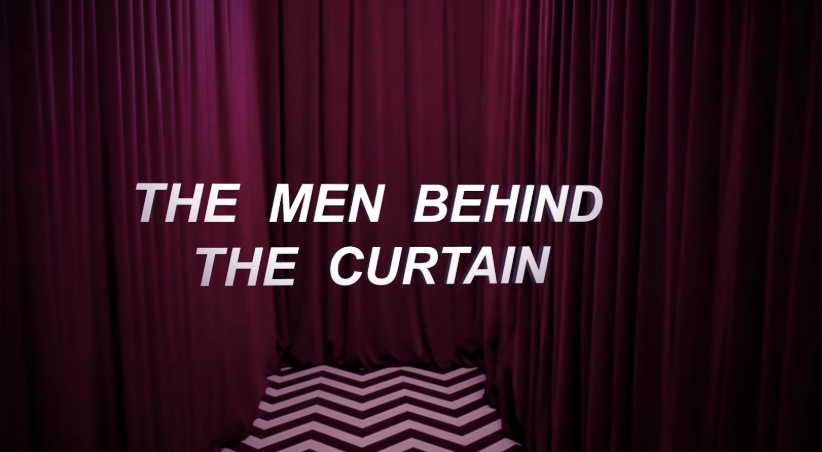 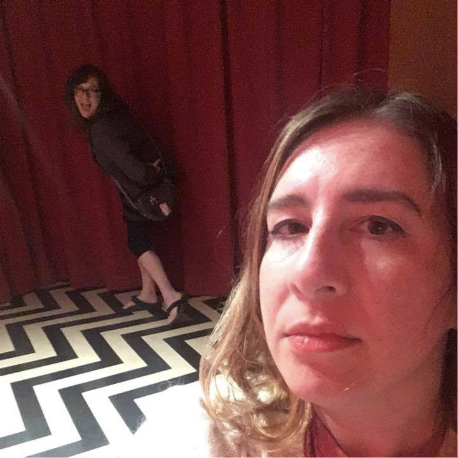 The author and Julee Cruise Director mellotron-player LARPing TP in the Pacific NW.

Weirdly good! She picks the best of their canon, flips the narrator, and reinvents the songs creatively.

Netflix, Coachella, and Beyoncé don’t need a single blade of my grassroots support, but if you didn’t see this concert movie wtf are you doing with your life? This is a love letter to HBCUs, drum corps, Black Panthers, women artists, and iridescent mukluks. Just watch this 5 minutes from the Nina Simone ballet at 39 min, to the Busby Berkeley-esque end of “DIVA” at 44 min.

Fave Comedy Video (and worst use of grant funding ever): DRUNK HISTORY – Dolphin Sex February 2019 Comedy Central doesn’t need me propping up their business either but if you want to laugh until milk comes out of your nose, pour a tall glass of 2% and watch Drunk History: The Study That Involved Dolphin Sex and LSD. What did this grant proposal look like?! youtu.be/p7ruBotHWUs

The following also did not disappoint: Jawbox, Bikini Kill, Throwing Muses. Built to Spill, Sleater-Kinney (but ugh, no Janet Weiss–and these were all at larger, corporate venues). As the end of Twin Peaks: The Return dared ask: Wait…What year is this?!?

(full disclosure: my band Shepherdess played at the Team Dresch show but that is not why I chose it!) 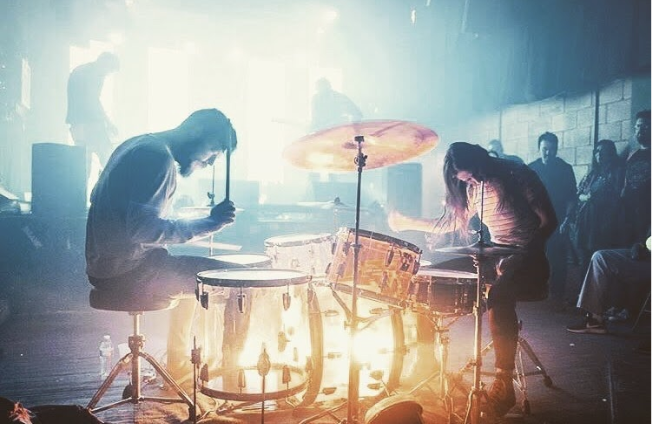 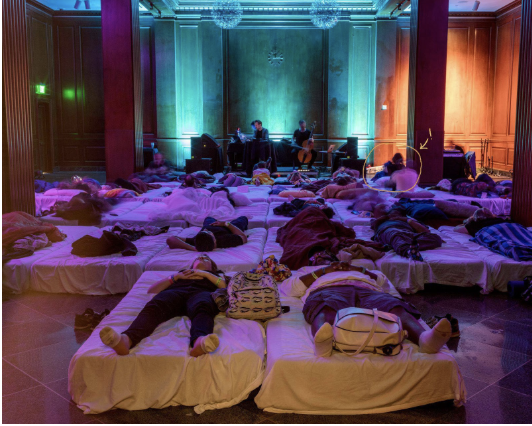 The author shown not sleeping at the MOOGfest Sleep Concert, 5/19/19 (from New York Times, annotated by author).

THE WORST Heartbreak of 2019

It’s not a huge surprise that the niche, Moog-synthesizer-inspired music festival is suspended after 2019 (2020 might be a “rebuilding year” or it might be extinct). This is of course the year our resigned acceptance of music festivals was lapped by our love of Fyre Festival documentaries 🔥⛺🥪. Moogfest struggled with ambitions beyond its capacity and budget. But where else could you see the Silver Apples, Suzanne Ciani, Malcolm Mooney, Mark Mothersbaugh, Money Mark, Michael Stipe, Martin Gore, Madame Gandhi, Bootsy Collins, Sudan Archives, Ono, Questlove, Quintron, Grimes, Talib Kweli, and Janelle Monae under one banner? Not to mention synthesizers powered by the sunrise, multi-colored pedicures, or old-timey player pianos. They also did a great—not perfect—job of showcasing performances and workshops with diverse/inclusive artists. And held a timely protest vs. the HB2 “bathroom bill” with Democracy NC. *And if i hadn’t accidentally drunk that weird energy drink at 2 in the morning during the “Sleep Concert,” I wouldn’t have had my picture in the New York Times (but I would have been waaay less wrecked for the rest of the festival).

If you want to join me in some raw FOMO, know that this year’s continuation of YLT’s Hanukkah tradition included the triumphant return of Janet Weiss (ex-Sleater-Kinney, see below) and Boston representin’ with Christmas (the band), Josh Kantor (Fenway organist), and Kevin Micka (Animal Hospital). YLT FTW! And here’s a bonus humblebrag: New Year’s Eve 2013, after playing First Night (back when it was cool) with Animal Hospital Ensemble (back when it was 50 people) I stayed up all night with Yo La Tengo dissecting Prince’s endless guitar solo encores (at one of the last shows he ever played). And then I bitterly rued losing all that sleep!

The legendary drummer quit Sleater-Kinney in July, citing her unequal role and discomfort with their new musical direction.* This bad news was quickly eclipsed by her terrible car accident in August. But–with the support of her medical team, family, friends, and fans worldwide–she’s back behind the kit with a surprise Yo La Tengo cameo! *“Ruins” + “Reach Out” are the best entry points to the controversial new S-K album. But moreso: looking forward to a make-up Quasi tour for Weiss ASAP!

Hilarious comedian and black lesbian Johnson was expelled from this otherwise-white-cis-straight trio shortly after they won a well-deserved Webby for best News & Politics podcast. MSW first captured my heart with their Fantasy Indictment League and descriptions of Rudy Giuliani’s slimy, shambolic tv rants as “lubing the truth”–both gross and insightful. Johnson cites the split as yet another case of a rich white person taking advantage of a person of color with fewer resources. The other side has no comment. MSW still exists, along with a new Daily Beans, while Johnson now hosts The Racial Maddow Show.

It’s exciting and soooooo long overdue that the art of women and people of color take up more space in this place that’s sposed to reflect our entire city’s culture. This “takeover” is fine but it’s weirdly sparse–a letdown when you think of how much more art and stories could have been included*. The museum decided to focus on its own collection (which is ~8% art by people who identify as women, and an even tinier slice of black, Latinx, Asian American, indigenous, gender non-binary, artists with disabilities, etc.–plus most works limited to 1920-1970–wtf?!). The exhibit explicitly draws notice to the spaces where art is missing through absence but I wish they’d devoted more resources to filling in the gaps. I think the thing to do is to take the MFA up on its offer to host community groups and deliver speeches from a soapbox on this floor. We can all use the time and space to demand more space for art that is representative of our city. *In short: psyched to see all together: Loïs Mailou Jones, Helen Frankenthaler, Joan Mitchell, Elaine de Kooning, Ruth Asawa, Wendy Red Star, Grace Hartigan, Meta Vaux Warrick Fuller, Kiki Smith, Louise Bourgeois. Wish I’d seen Amy Sherald, Amy Sillman, Nan Goldin, Hope Gangloff, Cristina Toro, Mary Reid Kelley, Mary Blair, Mary Abbott, Josephine Halvorson, Emily Carr, Judith Godwin, Brenda Holzke, Helen Becker, Deborah Remington, Perle Fine, Laurie Anderson, Grandma Moses, The Guerilla Girls, the quilters of Gee’s Bend, and the aforementioned Lynda Barry. (or even beyond the Americas to international darlings like Leonora Carrington, Remedios Varo, Rosemary Vanns, Hilda af Klint, Amrita Sher-Gil, Lotte Reiniger, Claire Parker, Maria Sibylla Merian, Sonia Delaunay, Yayoi Kusama, Najia Mehadji, Bridget Riley, Tove Jansson, Nathalie Lété, Vanessa Bell, Katja Spitzer, of Käthe Kollwitz, JUST TO NAME A FEW. feel free to friend me on Pinterest to exchange lots o’ art: https://www.pinterest.com/earkin/

Here are some active, optimistic antidotes to this bad news (where have all the feminist superhero trios gone?…and the fact that we still live in the darkest political timeline, of course):

Activist Afternoons is every Sunday 4-6pm at Workbar in Central Sq, Cambridge. Pick a progressive cause and group, then organize and do footwork to fix the tremendous amount that’s fucked up about the current state of politics. JUST DO IT! You’ll feel less unfocused, impotent rage and will have a real impact on your community and country.

Somerville librarian Tim Devin and Practice Space teamed up to offer a historical tour of the past collectives, non-profits, radicals, and visionaries who made this city weird and awesome before it was quite so gentrified (RIP/come back soon: rent control.)

During the school year, GRCB offers an after-school program at several public and charter schools.  Mentor girls—and any youth marginalized by gender—as they write a jam, record it, and make a music video. I’ve been a founding organizer and teacher in GRCB’s summer programming for many years but this was the first time I was an afterschool mentor—so rewarding and inspiring!

Liked it? Take a second to support Emily Arkin on Patreon!