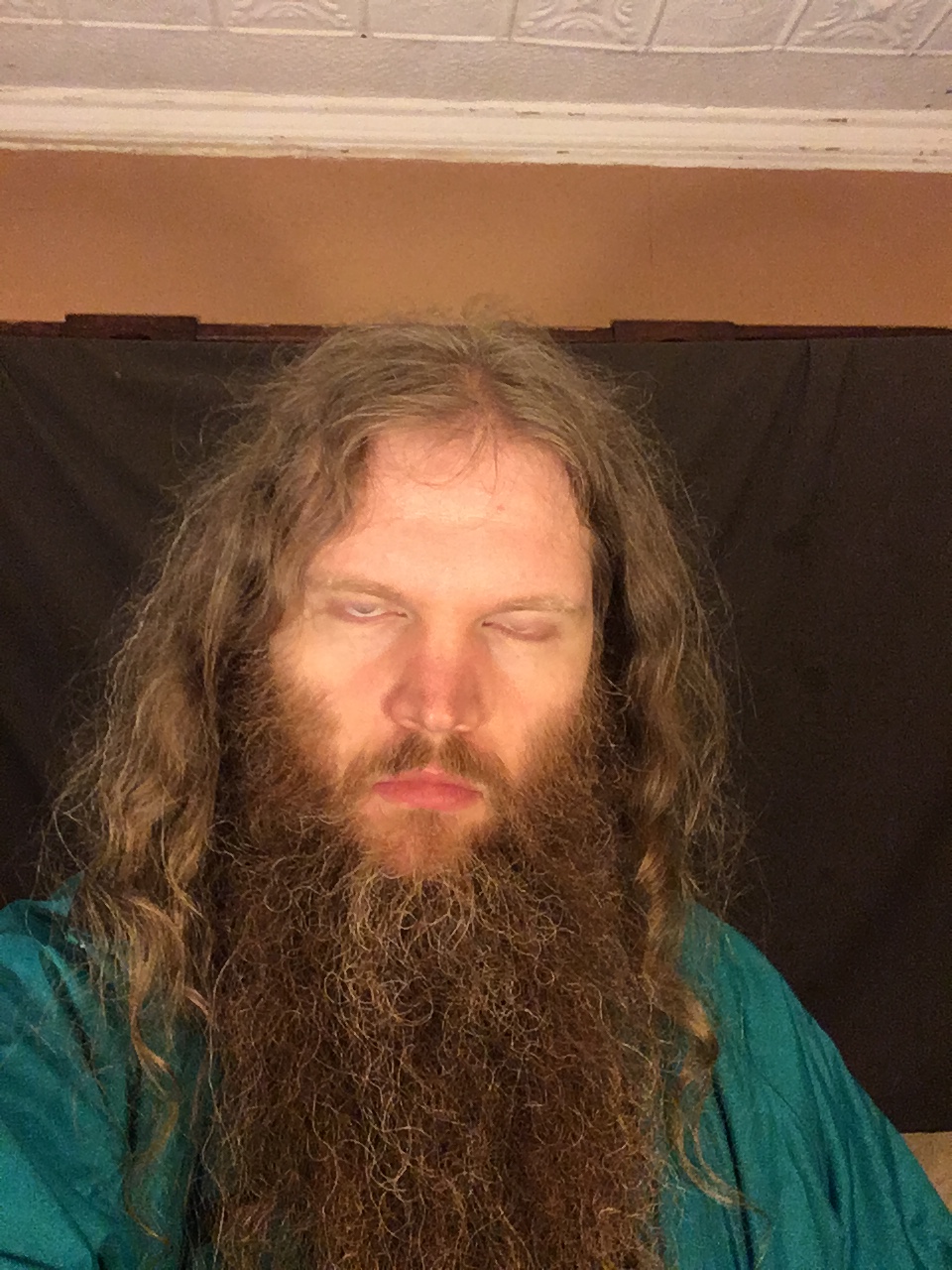 1. The wind chill was 23/-5 in New York City and there was a cop standing next to his squad car eating an ice cream cone, asserting dominance. As he did this there was a gust strong enough to make a small shard of curved glass (from a smashed light bulb?) blow through the intersection beyond him. It sounded like several small bells as it sailed across the pavement from one sidewalk to the other.

2. A kid stuck her head out over the conveyor belt while in line with her dad in the grocery store. She was the exact right height to do this, and when the conveyor belt started moving, keeping her head stationary she stuck her tongue out so that she could lick the groceries as they passed by her face. She licked the plastic bag containing a loaf of bread (the whole length), a box of Cheerios (the whole length), and then her tongue grazed a bunch of bananas before her father caught her in the act and gently scolded “come on! I told you not to do that anymore!”

3. Before a rock band started playing, someone left a large slice of watermelon standing on end in front of a box fan that was on stage blowing at the audience. The watermelon wobbled ever so slightly from the wind of the fan and the vibration of the music. I watched it the whole time.

4. In the shop a man who’d said he was from from Macedonia referred to crackles and pops on records as “sparkles”, as in the sentence “this record, it is without sparkles?”

5. On a deep winter night, driving north on Brighton Ave at about a quarter to two in the morning, I saw a woman waving her arms hysterically and running out in front of the car that was driving a couple hundred feet ahead of me. The car swerved around her, offered an extra long beep, then sped away. I slowed down, pulled up next to her rolled down my window and asked her what was going on. Her face was read and tear streaked, “MY FRIEND’S DEAD!” she near-screamed, then chanted “ALDER AND PORTLAND?! ALDER AND PORTLAND?!” a few times. I took this to mean that she wanted a ride to the intersection of Alder and Portland Streets, which were maybe a ten minute drive behind me. Fearing that if I didn’t she’d wind up getting hit by a car or taken advantage of, I told her I’d bring her there.

She tried saying a few things but was sobbing too hard for anything coherent to come out. Mostly I just listened to her sob in the silence until we came to the recently closed 7-11 at the intersection of Brighton Ave. and St. John St. at which point she asked in a suddenly steady voice “Can you believe it? I’ve never known life without it. Is it silly to be sad about a store you never went to?”

6. A rap battle broke out at a yard sale in Rochester, New Hampshire. A shirtless man with a backwards hat asked another fella at the yard sale, one with his shirt on and his hat forward, if he liked hip hop. The shirted fella said yes, he did and the unshirted fella immediately started rapping at him. The first line of his rap was “LET’S START WITH THE BALL” repeated 8 times, this was a reference to a large pink ball that was for sale on the ground near them. The other guy tried to rap back at him, he was enthusaistic but not nearly as entertaining. They went back and for 4 or 5 times before it petered out. Other subjects rapped about included how lame the other yard sale around the corner is, and my sunglasses.

7. To access the bathroom, I had to move a massive rolled up carpet that was leaning against the door. This took some time and careful maneuvering as I struggeled not to knock anything else in the too tight space over. Once inside, I was overwhelmed by two equally strong, contrasting smells. The first being a sort of fake synthetic watermelon smell, the other being what you would smell if you’d spilled an entire jar of marinara sauce on the floor. There wasn’t a drop of sauce anywhere.

8. I watched an old woman pull into an Arby’s parking lot, push her car door open and, without getting out, take an incredibly long drag off of a cigarette. Then, as she exhaled, she, with great effort, labored to get one leg out of the car and onto the parking lot. As soon as her one foot touched the ground there was a loud crack of thunder above. She scowled at the sky for a moment, her foot still on the pavement, said something to herself, pulled her leg back into the car (which seemed harder than getting it out). As the sky rumbled some more, she closed the car door, started it, backed out and headed for the exit. As she was idling with her blinker waiting to pull out onto the road a torrential downpour began.

9. I missed a call from a Cumberland, Maine phone number and since it seemed plausible it might be someone I knew I called back. The phone didn’t ring, there was just a moment of silence followed by a sudden blast of distorted music, a Rachmaninoff like piano flourish for maybe 1 and a half seconds followed by a just as abrupt and just as distorted female robot voice saying “good……………BYE!”

10. A man wearing a t-shirt with an M&M on it offered me some M&Ms. He was carrying a large, open bag full of them.

11. I saw two very drunk and loud dudes standing side by side in the doorway of an abandoned storefront peeing together, one of them kept saying “let me piss!” though no one was objecting. It was oddly touching.

A third probably drunker fella was standing behind them keeping watch, but was distracted by a threatening parking meter which he abruptly kicked and yelled “FUCK THIS METER!”

He did this two more times before I yelled out “yeah, go fuck that meter!” at which point he stopped keeping a look-out for his two still peeing friends and proceeded to step forward and dry hump the meter.

12. “This music makes me feel like I’m being eaten by a spoon!” exclaimed someone with what sounded like enthusiasm as some old tape and synth music played in the shop.

13. I was watching a man holding a resealable plastic bag with a peanut butter and jelly sandwich in it. Every time he spoke he’d for some reason unconsciously squeeze the sandwich and some PB and/or J would squirt out and smoosh onto the inner walls of the bag and leave purple and brown smears . I watched him maybe two minutes and saw a pretty normal looking sandwich get the life squeezed out of it, beautifully painting the inside of the bag with its guts.

14. For my horrible toothache, I found only one solution: sip cold water and swish it directly over into the cavity. I had to do this for roughly 30 hours straight. Only cold water worked. Hot or warm water made the pain considerably worse.

Trying to sleep like this, sitting up, I’d sip some cold water, move it over to the cavity to sooth the pain and then doze off. I’d have about 1-3 minutes of sleep before one of two things would happen. Eventually the water would warm up in my mouth and the pain would come raging back, or I’d drool a little water onto myself and be shocked awake by the wetness. I did this for about four or five hours and had hundreds of little dreams.

15. A couple miles out into the woods I see a guy up ahead a couple of feet off the trail snapping branches off a tree. I’ve never seen another person this far down the trail before.

When I get close enough he turns to me and with a thick Maine brogue says “she don’t need these” then turns back to the tree and keeps on snapping.

16. Parked at the edge of a parking lot eating supper in my car and listening to the radio (as I often do), I saw a man pass by me with a shopping cart overflowing with a disassembled drum set. He was holding the tower in place while pushing the cart forward and I was shocked that nothing fell out. He pushed the cart out into the road and then onto the median at the red light, set the entire drum set up, and then walked away with the emptied cart. About 15 minutes later he came back, picked up a drum stick, hit the sare drum once, then walked away again.

17. “Stay out of trouble or, if you can’t, name it after one another.” So said a very talkative man to a friend and I at a yard sale as we were leaving.

18. A couple of days before Thanksgiving, two men in an antique store. One’s maybe 50, the other around 70. It’s clear these two are always here. Assume the thickest possible Maine accents for their age ranges.

50 yr old: ….might get some stuffin’, dunno, but I’m sittin’ right on my ass right friggin’ here, lotsa games on…

50 yr old: ….maybe I’ll even put out the open flag if some other lonely bastard happens to be drivin’ by and wants to pop in and watch me eat……

19. For 20 years minus 10 days I had a purple winter hat that my late grandmother had made specifically for my oversized head. I lost it and was crushed. After an evening spent looking for it, hanging flyers, checking lost and founds, gawking at everyones head to see if my hat happened to be on it, all the whole inevitably reflecting about the all the thing I’d done with that hat on my head and, of course, thinking of my grandmother. I returned home to my apartment which mysteriously smelled like cigarette smoke. I couldn’t figure out why.

Later, without mentioning that I’d lost my hat, I told my mother that I’d mysteriously smelled cigarette smoke upon returning home, to which she immediately said “that’s your grandmother. Whenever I find myself thinking about your grandmother I always smell her cigarettes”.