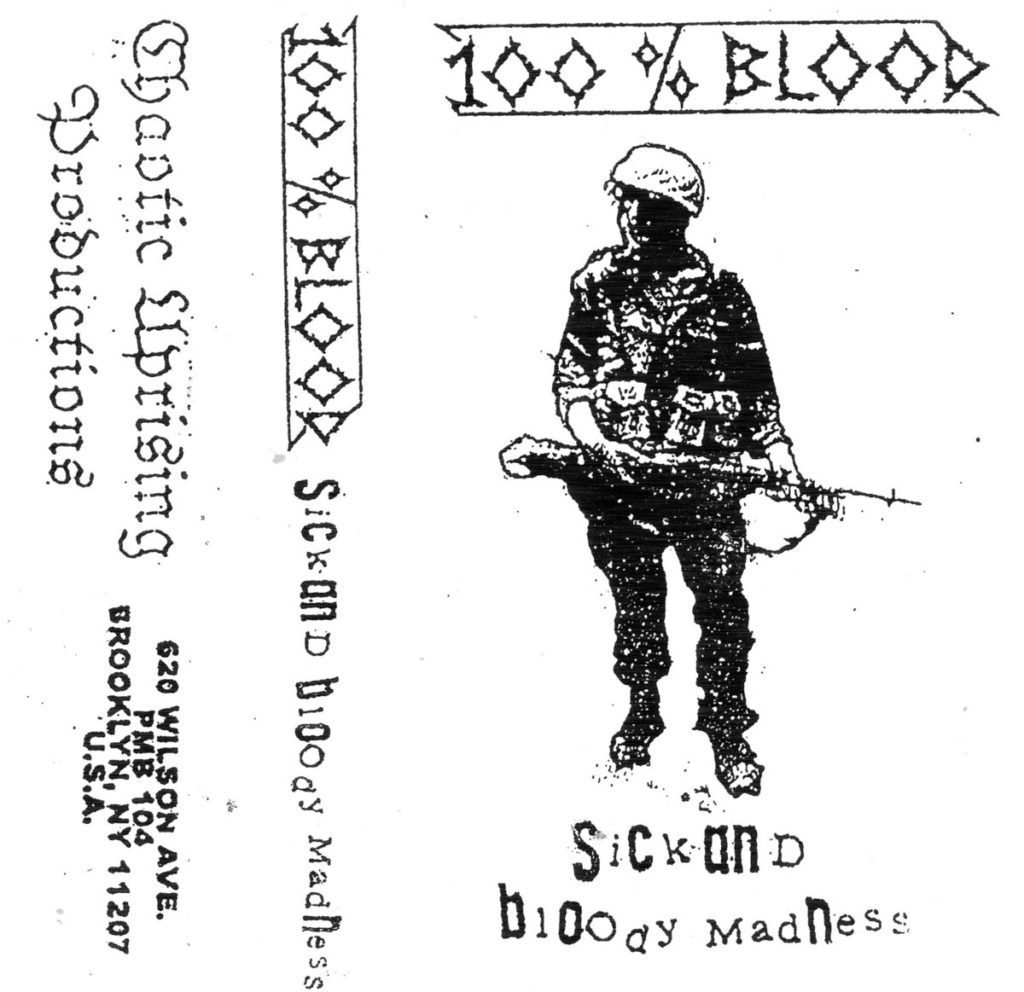 If there’s one thing the punks miss in an ongoing pandemic, it’s primitive beats and huffing glue in a Brooklyn basement — and that’s precisely what 100% Blood supplies in their demo entitled Sick and Bloody Madness. With a deliberate emphasis on 80’s hardcore style and production and winks of d-beat and oi, the band barrels through nine pulp-beaten tracks in a humble six minutes. The demo’s brevity is fitting since the band left no room for frilly guitar solos and preachy choruses — just bare essentials. This is caveman music at its best.

The demo commences with a familiar wall of washing cymbals and nearly-exploding bass drum and guitar noise, asserting to the listener that what follows is a raw punk barrage. 110% Blood’s musical baseline centers around dis-punk, eighth note blast beats, and stomp mosh USA-style punk, pummeling the listener with blunt intensity and welcoming their dancing feet. “Fed on Waste” picks from the Anti Cimex tree, throttling a tripletted d-beat with a catchy titular hook, albeit without the former’s signature melodic soloing. The band refuses to adhere to strict subgenre conventions, utilizing an array of rhythms and song structures while retaining their raw 80’s hardcore gravitas. “Outside Forever” climaxes with a sung oi chant after squeezing through crammed staccato blast beats like a fixie weaving through 16-wheelers. These references to subsects of punk celebrate trailblazing bands like Government Issue, Poison Idea, and S.O.A. in their most unhinged, disaffected moments. Here, these moments feel lovingly cherrypicked from the original hardcore canon.

Besides their faithfulness to the eras and styles of punk heard on Sick and Bloody Madness, 100% Blood succeeds achieving a fierce and deranged sound. Vocals cut through the mix with thick distorted growls and screams. Guitars buzz and throb like their amps are hanging on for dear life. Drums pound unscrupulously, untuned and unhindered by dynamics. In the heat of these songs, an energy permeates like a gas tank near empty meeting a healthy flame, burning out intensely. Songs like “They Tell You Who To Kill” display moments of an explosive energy enduring past extinguishing as the vocalist pants, gasping for air, letting out rabid shrill screams. Punk revels in crossing the line of composure and exhaustion: getting dirty, letting sweat stain through your clothes — letting the dirt and asbestos stick to it, letting the street dogs lick it off, letting your hot metal spikes cool off in the dirty night.

100% Blood scratches a good few time tested hardcore itches with their authentically curated sound and gritty production. Their songs are danceable and carry depths of punk literacy, all while remaining short but sweet. Their inclusion in Chaotic Uprising Productions rounds out the label’s roster, filled with like minded bands with a more melodic and metal-focused edge. 100% Blood, like their namesake leaves it all out on the table: concise songs that burst brain cells and eardrums, filling the room with an energy of power and authenticity — something familiar, yet always fresh and new.