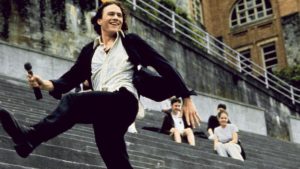 I can’t think of a better rom-com than the 1999 classic 10 Things I Hate About You. It’s got everything: quotable lines, Heath Ledger singing and dancing across bleachers, ’90s fashion (complete with platform Steve Madden sandals–you know the ones), Allison Janney as a weirdly funny and strangely lustful school counselor, and a kickass soundtrack that will take you way back and hit you with unbelievable nostalgia.

10 Things, directed by Gil Junger and based upon William Shakespeare’s Taming of the Shrew, spins the story of Kat and Bianca Stratford, two sisters living in Seattle with their overprotective and overbearing father who has one rule: Bianca can’t date unless Kat does. Frustrated, as she is an extremely popular sophomore being pursued by the slick-haired, macho, self-absorbed, and douchey senior Joey Donner, Bianca begs Kat to date. Nearly a complete opposite of her sister, Kat is an antisocial, no-nonsense, punky senior who blares Joan Jett, does whatever she wants rather than what is popular, and intimidates and scares away her classmates, being called a “heinous bitch” by many (she’s absolutely one of my favorite characters, played with charisma and wit by a young Julia Stiles).

Also pursuing Bianca is new kid to Padua High, Cameron James (a doe-eyed and fresh-out-of Third Rock From The Sun Joseph Gordon-Levitt). His help? The geeky and funny aspiring popular kid Michael Eckman (David Krumholtz). Together, they try everything–tutoring Bianca in French (which falls flat), Cameron asking Bianca out directly–which she informs him is impossible because if her older sister Kat doesn’t date, she won’t be able to. Hatching a plan, Cameron and Michael decide to try to get somebody to date Kat. They find Patrick Verona (the lovely and much-missed Heath Ledger, showing his acting chops early in his career here), the “bad boy” who has rumors whirling around him like a tornado–did he really eat an entire duck alive? Is he actually Australian? Did he really do time at San Quentin prison last year? Michael doubles up on the plan and convinces Joey to pay Patrick to take out Kat, under the guise that doing this will allow Joey to date Bianca.

Patrick’s initial advances also fall flat, but after Bianca and Joey do some snooping into what she’s passionate about and inform Patrick, he eventually is able to win her over. Attending concerts and house parties together, the two begin to bond, and feelings grow. Bianca begins to see Joey for what he is, and Cameron’s caring and genuine nature wins her over.

Things look good for a while, but there’s the thought that actually, Patrick is being paid to take Kat out (unbeknownst to her) and that can’t stay hidden forever…

10 Things I Hate About You is an absolute classic. It’s hilarious, it’s quirky, and it’s amazing to see these big name actors young and fresh-eyed and all working together–especially if you’re a massive Nolan Batman geek like me (seeing young Joker and young John Blake interacting is pretty amazing!). The soundtrack, packed with artists like Letters To Cleo, Joan Jett, Barenaked Ladies, and Semisonic, is one that is timeless and I’ll never get sick of listening to it. 10 Things has a special place in my heart because it brings back memories of childhood, of being a teenager, and being wistful for the 1990s.

Don’t miss out on this one.