I originally discovered the Lucky Dog through live music. More specifically, Ween brought me to this place. One of the owners, Russ, is a vocalist for the Ween tribute act Joppa Road. I write about them sometimes.

Throughout my one year span of imbibing in this establishment, the place has been going through a re-branding process (“why does the receipt say Mule Bar?,” many would ask). Sometime in the near future, the Lucky Dog will become The Mule, and it appears the re-branding process begins with live music. Every third Thursday of the month, the Lucky Dog/Mule hosts “Three Things Thursday.” This fancifully branded once a month event typically features a food of some kind, a beer special of some kind, and a band. 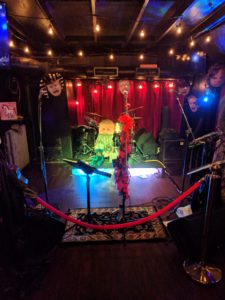 To say the transformation from dive bar to music venue is impressive is an understatement. The dart area is roped off on these Thursdays, decorated with lights, and hooked up to an impressive sound system. The aforementioned Joppa Road played recently, and took full advantage of the space, hanging up weird baby face masks (for use during “Spinal Meningitis Got Me Down”) and placing the other two of the three things of this Thursday at the front of the bar: a chocolate fountain and a cheese fountain (Chocolate and Cheese, get it?). In spite of the chocolate fountain not working and the Velveeta refusing to melt properly, Joppa Road at the Lucky Dog was one of the most fun live performances I’ve been to in quite some time. 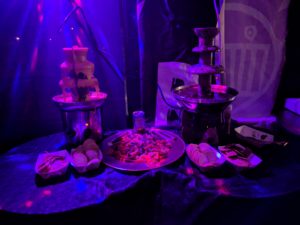 Space is limited, for sure. It’s not the biggest bar to begin with. But they seem prepared for it. A TV facing the crowd gives a good view of the performance for those stuck back near the entrance, and the majority of chairs and stools have been moved out of the bar, giving just a bit more breathing room. As a lean-on-the-bar drinker, I appreciate this.

The best way I can describe it is maybe if you cut off more than half of Brighton music hall. Many have told me it is similar to how Dodge Street was before they added the second room. Speaking of which, a Dodge Street staple, Fats Hammond, played the month before Joppa Road. I knew nothing of Fats Hammond aside from their legacy at Dodge Street. The crowd was full of men with grey hair talking about their favorite saxophone players. They were all very friendly. Oh, and the band was great. Obviously.

I overheard several conversations about Dodge Street that night, and how that second room ruined it. This was funny to me, as that second room was all I knew of Dodge Street. North Shore residents definitely have strong opinions about their music venues, and I think this is because they are few and far between in this area. Maybe people will argue The Mule was better as The Dog, or their neighborhood bar was better without the music. But for me, any expansion of the North Shore live music scene is a positive. 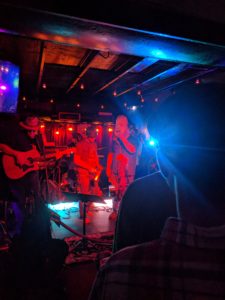 So far the venue has seen Qwill, Jittery Jack, Dub Apocalypse, and of course Joppa Road and Fats Hammond perform. Several bands are already lined up in the future. Why not start going to this thing before it becomes cool? Together, we can be a new wave of hipsters, and I swear once I get more of these under my belt I will write about a band other than Joppa Road.

The next Three Things Thursday will feature the B3 Kings and takes place on October 18. On October 25, MOTO, 77 Everythings, and Rolling Stony will be playing. Music starts around 9:30.

The Lucky Dog is located at 129 Cabot Street in Beverly, Massachusetts. 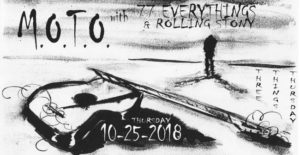 Note: After publishing this, Russ informed me the music may be taking a short break during November and December to take care of all holiday drinking matters. The music should be back by January.