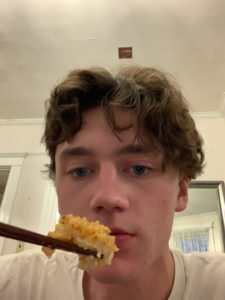 The Strokes, “The Adults are Talking”

The opening track off The Strokes’ triumphant comeback, The New Abnormal, is a quick reminder that they haven’t forgotten how to write a hit riff. The dueling guitar solos of Albert Hammond Jr. and Nick Valensi maybe aren’t anything new, but it’s special to hear one of this era’s rock powerhouses back in true form.

On Women in Music, Part III, Danielle Haim flexes her impeccable songwriting chops. Carried by a strong baritone guitar line, “The Steps” has one of the most infectious melodies of the year paired with some truly powerful lyrics.

Phoebe Bridgers had herself an incredible year, catapulting into the upper echelon of indie stardom. “Kyoto” beautifully treads the slowly but surely fading line between radio friendly pop and slow, sad indie.

Twin Peaks, “Any More Than You Want”

The Chicago indie mainstays released a tight 4-track EP this year—Side A—with some of their greatest tunes yet. Multi-instrumentalist Colin Croom wrote the EP’s tightest song, which incorporates the finest aspects of George Harrison’s post-Beatles production, topped with an achingly gorgeous melody that carries the song’s immense outro.

Perfume Genius, “On the Floor”

The second single to the stellar Set My Heart on Fire Immediately is a signature Perfume Genius track, blending elements of Prince, Burial and deep house to create an anthem that epitomizes the somber underground lust genre. I made that genre up but I think it’s fitting.

Written for Sofia Coppola’s (wife of Phoenix lead singer Thomas Mars) new film, On the Rocks, “Identical” was enough to make everyone anxious for a new Phoenix album. The single  boasts some of Mars’ finest lyrics (“I’m no prophet, I’m your friend / take my advice, make your mistakes”) and doesn’t try to be anything more than it should, which is perhaps what makes it so great.

I was between “Hey Jo” and “Cheap Regrets,” equally great tracks from the Pennsylvania indie band’s stellar 2019 album You Know I’m Not Going Anywhere, but it was this song’s chorus that  put it over the top for me. “Hey Jo” reads like a letter to a long lost close friend, and gives the album some true emotional depth.

The lead single off their “Two of Me” solidifies the reputation of L.A.-based duo Momma as a standout on the already-stacked Danger Collective roster. “Double Dare” has all the elements of a great modern indie song while still sounding fresh.

“Lifetime” truly is great enough to tie us over while we patiently await the upcoming solo albums from all three members of the xx. Romy’s debut single is a somber dance song that  tenderly tugs on all the same heart strings as every great xx song.

Knox Fortune has appeared all over the Chicago indie scene for years now, but “Sincerity”—and its album Stock Child Wonder—bring Kevin Rhomberg into his own light. It’s one of the year’s catchiest songs and has one of the year’s most creative videos to go along with it.