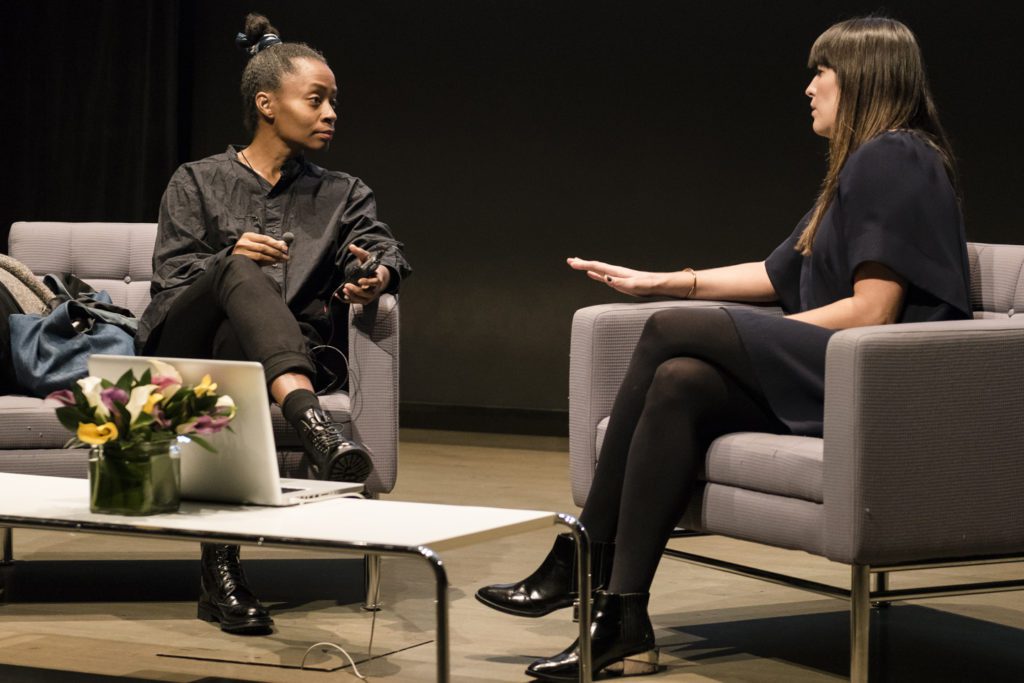 There’s a point during Kara Walker’s “Artist’s Voice” talk at the ICA last week when the message of her work–or at least, the most obvious, underlying message–is made painfully clear. Walker has finished talking about her work and is now answering questions from Eva Respini, head curator of the museum’s Barbara Lee Collection of Art by Women. Respini asks her a question about the meaning of her work in the wake of Donald Trump–racist, misogynist, scum of the earth that he is–being elected president of the United States. She mentions that they installed Walker’s piece just after the shootings of six police officers in Baton Rouge, which was preceded by the shooting there of black man Alton Sterling.

“We’re living in a divided nation more than ever,” says Respini. “How have recent events made you see your work in a different light, or have they?”

It’s a fair question, if a little clunkily worded. But for Walker, this turn of phrase, this BT/AT (Before Trump/After Trump) mentality, is not cutting it.

“Well, no, actually, that’s the problem,” Walker scoffs. “We’ve been living in a divided nation.”

Walker doesn’t have to say this; her work makes this apparent in a way that hits you mercilessly in the gut. Her work–about lynching and the mythology of pure white womanhood, about the Great Migration and urban life, about the transatlantic slave trade and the Middle Passage, about black female stereotypes and Black Lives Matter and much more–reminds us that the past is undeniably relevant today. History continues to be made, day in and day out.

We’ve been living in a divided nation, and while the results of the election and the continual shootings of black people emphasize the sharpness of that divide, history is done a disservice by conveying, even unintentionally, that this country is more divided than ever.

Walker, who is based in New York, made an appearance at the ICA on November 17 in connection to her 2010 piece The Nigger Huck Finn Pursues Happiness Beyond the Narrow Constraints of Your Overdetermined Thesis on Freedom—Drawn and Quartered by Mister Kara Walkerberry, with Condolences to the Authors (an only slightly long title for Walker), that is on display in the ICA’s First Light: A Decade in Collecting exhibit.

The Nigger Huck Finn primarily consists of the black cut-paper silhouettes that Walker has become known for. It moves beyond the novel to reference other venerated works of fiction such as Uncle Tom’s Cabin and Death in Venice. Like Huck Finn, the boy in Death in Venice, Tadzio, is also an “object of desire,” according to Walker.

In the piece’s left-middle, Harriet Beecher Stowe snatches a boy with a crook. Touching him is a naked boy (Tadzio perhaps?) running from a man with tattered pants. The man’s hand has been ripped from his arm and is still gripping the boy’s ankle. Topsy, the black slave girl and pickenanny stereotype in Uncle Tom’s Cabin, is somewhere in the mix. This is just a portion of the whole scene, which spans four walls. It contains the kind of extreme sex and violence that runs throughout Kara Walker’s work.

But the line between farce and serious commentary in the piece’s extremeness, as in her work as a whole, is blurred. Curator Respini comments at one point about the “comically violent” nature of Walker’s art that The Nigger Huck Finn demonstrates.

Admitting that she does lean toward the comically grotesque, Walker ventures that at least one part of the piece–a boy holds an ax and pulls the foot of a different boy who lies on the brown paper ground in tatters–is not so funny.

“Maybe that’s not comic and just grotesque,” she says.

Although she started out as a painter, Walker explained how she became uncomfortable with the art form. She came to find it representative of grand, self-important Western patriarchy and “manifest destiny.” She found that people viewed her artwork through her black body and began to question herself and her work.

“Who is this work meant to please?” she recalls thinking. “Is this work satisfying a patriarchal world view? Whose rules are you following?”

So grappling with subjectivity, with power dynamics, with race and gender–the same things she grapples with in her art–Walker began focusing on cut-paper work. Walker was attracted to this medium’s “second class status” as well as its intimacy and humbleness. It is a method that might be deemed craftwork or artwork depending on the prestige of the artist and a rejection of a method that is, for her, rooted in Western patriarchal domination and mastery.

“I don’t know how many different ways people have asked me to wish away for them,” said Walker. “I think doing the cut-paper silhouettes is one way of wishing it away by making it fanciful and easily digestible.”

But Walker doesn’t just reject grand Western artistry–she takes it and makes it her own. By fusing art about racism both in life and in texts like Uncle Tom’s Cabin with what she calls the “grand history drama” and the panorama, Walker subverts those lordly, omnipotent styles of art in a radical way. In The Nigger Huck Finn and in other works, she retells history as told by the White Western Patriarchy through her own lens.

But can we trust her? Walker said that she sees herself as an unreliable narrator in the stories she tells in her work. In describing this position, she drew on her installation for the Art Institute of Chicago in 2013, Rise Up Ye Mighty Race!, which combines large graphite drawings, small mixed media drawings and cut-paper silhouettes similar to those in the Nigger Huck Finn except, this time, they’re white on a black wall.
The piece is in many ways a journey into Walker’s paranoid psyche, a response to white nationalist William Luther Pierce’s 1978 writing The Turner Diaries. It’s a runaway thought experiment through ink and paper exploring a question: what if the race war that Luther championed really happened? To up the inner turmoil, Walker was making Rise Up while the 2012 election was wrapping up and “freaking out” over the unknown results.