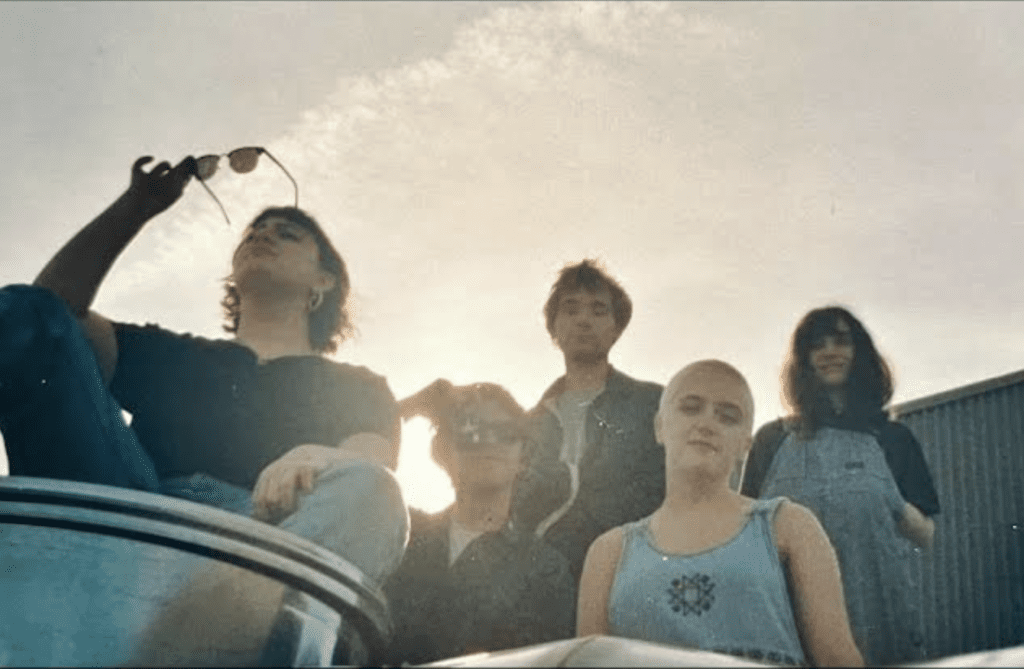 Meet Winkler, one of the most exciting indie bands in the Boston scene.

Winkler began with two friends, Justin Schaefers and Christian Schmidt, recording demos on multitrack cassette recorders in 2018. The first song the two wrote during this time would become the single, “Winkler,” which then went on to become the name of the project.

As more music was written, Winkler got more serious about music and playing in a band, adding members, eventually becoming the current lineup of five members: Schaefers on vocals and guitar, Schmidt on drums, Ava Connaughton on bass, Alex Massey on guitar, and Maddy Simpson providing vocals. And while the band has since moved on from the cassette recorder days, the DIY spirit of making music for fun’s sake continues.

That can be heard clear as day within their music, in person at a live show, or even in their online presence — Winkler is very active on TikTok, posting little snippets of songs in progress, clips from shows, and covers of artists such as Paul McCartney, Harry Nilsson, and Cass Elliot. It’s essentially a video journal for the band’s output.

Winkler has released six singles to date, with the latest being “Mona.” The track is a groovy indie jam with absolutely killer guitar licks, masterfully layered vocal harmony, and relaxing synth lines. “Mona” was written during the quarantine, with a drum loop from a toy keyboard providing the backbone for the demo. This loop can still be heard at the beginning of the final version.

There’s a special kind of comfort in this song, like with many Winkler songs, that feels blissful and positive regardless of the content of the lyrics. “Twin Snakes” is a standout track that also exhibits this same warmth and earnest delivery. Each song sounds like 1960’s garage rock meets modern bedroom indie. You can hear sprinkles of Jonathan Richman, the Yardbirds, 70’s Paul McCartney, and maybe even a bit of surf rock. Across the first six singles, Winkler sounds like they are having a lot of fun, and that is absolutely infectious.

Recently, the band organized a last-minute front-yard show on short notice — the first show Winkler ever set up independently. They took the show out of the house-show basements into the great outdoors. Although the show was set up in a spontaneous and erratic fashion, it went off without a hitch, avoiding technical difficulties and any unwelcome visits from the police. After all, a nice rock show on a sunny day never hurt anybody. Events like this represent the DIY spirit that exists in the Allston and Boston music scenes scene. “It’s amazing to know that you can just do it if you want to,” said Schmidt. 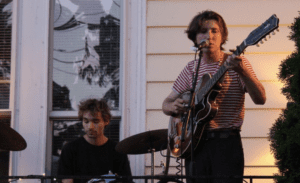 Schaefers and Schmidt at the aforementioned show © @aliawillsh00tyou

Winkler frequently plays in the Greater Boston area, and recently went on an East Coast tour with stops in Philly and North Carolina. With an abundance of playing and touring experience under their belt, the band is primed to start recording unreleased material and is planning the release of a seven-song EP, For You Now, in the Fall. However, one or two songs will be familiar to those who have seen Winkler play live before.

“The live shows demand a certain amount of energy, and with some of these songs, it’s hard to dip down a bit in energy level especially when you only have 30 minutes to do what you’ve got to do. It’ll be a bit of a surprise for people who have seen us a couple of times when they hear these songs. Maybe we can start working these songs into our future sets in an adapted live version,” pondered Schaefers.

Recording these older songs after having played them live for so long, feels like a necessary step for seeing what comes next for the band songwriting-wise, according to Schmidt and Schaefers. The band believes that sitting on these songs letting them develop and cultivating an appreciation for what they are now is a cool and unique way to look at them before going into recording.

“The EP could just as easily be called For You Then because of how old some of the songs are,” Schaefers joked.

It’s going to be an exciting next chapter for Winkler for the remainder of 2022. Keep an eye out for new releases and make sure to catch a live show of one of Boston’s most exciting up-and-coming bands.