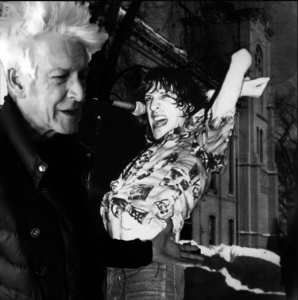 “I wanted that Andrews Sisters sound” says Willie Loco Alexander, of the cockeyed 3-part harmonies in his eponymous number off Aqua Vega.

Okay, so imagine the Andrews Sisters took a trip to the cinematic universe of David Lynch to hang out with the late, great Alan Vega (for whom the album is dedicated) and drank black motor oil while laying down a few bars.  That’s the sound that unwound itself from Alexander’s CD player one sunny Thursday morning in Gloucester.

Alexander was excited to show me his most recent album, which only he himself had in tangible form. He’d released it November of 2018 to Bandcamp- his first digital album in a venerable 5-decade career.

“I’m still sort of getting my head around it,” he says of the website.  His ten tracks, laid out neat and clean in that telltale blue-font-on-white-background, look decidedly un-reminiscent of a dingy record store in Charlestown or the fabled stage of The Rat.  Fans of the man, myself included, would be hard-pressed to imagine Alexander’s music coming at us via any other delivery system. But things change.

Every track on Aqua Vega sounds like a dark, industrial flashback to the 50’s.  Something was wrong with the time machine, perhaps, and things are looking a little warped.  Alexander, himself a member of the old guard of rock n rollers, grew up with a steady diet of Little Richard and Fats Domino, and Alexander hasn’t chosen to leave them behind.

There’s evidence of that influence in Mark Chenevert’s tenor sax laced throughout “Bud’s Twilight Lounge.”  It twirls and warbles while the faceless, eyeless voice of Alexander growls, “je suis confit, je suis confit.”  Then the drums kick up and and Chenevert’s sax is a warning that goes unheeded, and fades to black.

“You can’t really dance to it,” Alexander confesses as “DNR Blues” queues up and once again we’re drowned in industrial velvet.  Well, that may be true. It’s no “Hit Em Wit De Axe.” But within each song is the spectre of every dance craze from 1949 to 1980.  Like his good friend Alan Vega, Alexander possesses the ability to use fractured sounds and distorted motifs to convey something as universally understood as Johnny B. Goode.

“This is my doo-wop song,” he says of “Dear G,” a mid-album ballad that reaches almost-danceability with its doo-wop-she-bop refrain.  That is until the reverb swallows everything and you can see The Coasters and the Orlons and the Cookies getting sucked into the void.

And finally, “Joy to the World.”  Alexander starts out the track thanking Dave Koehler of the bygone fanzine, Hard Korps.  In a voice both strangled and sincere, Alexander tells his listeners that “without the support and enthusiasm of people like him, people like me don’t exist.”

Then, like the Fates over a hobo campfire, the refrain comes in:  “Joy to the world, for rock and roll. Let all earth angels sing.”  What follows is a cheeky list of all of Alexander’s influences since, well, birth probably.  You’ll hear some folks you know like Chuck Berry, Bo Diddley, and Laverne Baker, and some folks you may not, like The Rainbows and The Cadillacs.

Then, in the next verse, The Beatles and the Stones get mixed in with the likes of Reddy Teddy and the Real Kids and Alexander’s own Boom Boom Band.  This song is an elevator, and once it’s reached the bottom floor of Alexander’s subconscious, the song is aroar with voices on all channels shouting out early influences and past loves and former bandmates, friends and acquaintances.  It takes all kinds, don’t it? Meanwhile, the simple refrain, joy to the world, persists.

“You try, but you can’t thank everybody,” says Alexander.  Still in all, it seems like he tries harder than most. We walk over to his CD collection and he shows me the insert of an old album of his, where a fat block of 9-pt text lists maybe 75 acknowledgements.

“And then there’s that awful moment,” he says, “where you remember the people you’ve forgot to thank.”  Because, especially after a 5-decade (and counting!!) career, you’re bound to forget at least one or two.

But Alexander hasn’t forgotten Dave Koehler or Alan Vega or Chuck Berry or Third Rail or the Andrews Sisters or The Cadillacs.  If you listen well, you can hear him paying homage in every echo of Aqua Vega.

Here are some universal truths: Everything old will be new again.  Everything from the fringes will move center. Things change.

If there’s one thing Boston’s Shane Dylan and Kofi Lost have in common, it’s their ear for lush melodies that transport listeners…

Squirrel Flower – I Was Born Swimming

It’s fitting that first thing you hear off Squirrel Flower’s debut album I was Born Swimming is Ella Williams’ vocals. On the…