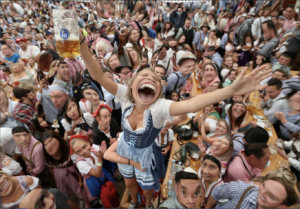 Near the water on a Friday night in Boston, a line wraps around a city block in the cold . A steady stream of breath wafts above the throng of people waiting for the doors to open and, presumably, for the fun to begin. The chilly night is amplified by the proximity to the harbor and the long walk from the nearest overpriced parking lot. The doors open almost ten minutes after the event’s scheduled start, the apple-cheeked mass of thirsty people, myself included, are allowed in.

My $65 ticket (plus fees, of course) provides me entry and as many tiny samples of beer as I can manage during the event. I opted against paying an absurd additional fee for the VIP experience. What would that grant me, were I in a position to afford it? Let’s see… getting in the door half an hour early, private bathrooms, a free coat check, and a voucher for food worth the hyperinflated cost of a soft pretzel. Totally worth it.

A crowd of flannel shirts, L.L. Bean fleece vests, Treehouse Brewing Company hoodies, and enough facial hair to make Grizzly Adams look like a newborn baby swarm past me to a table laden with festival pamphlets and glassware. Many then race off to various corners of the Bayside Expo Center to get those first ticks* in as quickly as possible. Others, less Uber-serious beer nerds, head off to the nearest table and request the beer with the highest alcohol content.

*“Ticking,” for those of you who are unaware, means to obsessively hunt down every new, expensive, or rare beer and try as many as possible, even if it means destroying your palate after the first 5. Don’t forget to give the rarest 5 stars out of 5 on Untappd.

I have chosen a number of breweries I wish to visit, and I begin to seek them out. Some beers on my list are mere curiosities while there are some I have been hoping to try for ages. In the end, however, there is nothing life-or-death about an event like this. The anxiety worn by some in the crowd makes you wonder if not everyone understands this. Beer festivals are meant to be fun. You’ve paid to be here, now drink and be merry! That sort of nonsense.

I begin waiting in lines for my turn at the taps. I politely accept each little two-ounce pour of liquid bliss and move aside to determine if my choice was a wise one. I do enjoy a few beers that would be quite delicious if I could have a full glass, and I try to take the time to appreciate their nuances. There is, however, nothing earth-shattering to be found at the bottom of a glass on this particular evening. I do allow myself to be teased two ounces at a time. That is what I paid for.

What I did not pay for is the beer spilled on my shoes, my pants, my arm, and my back by various clumsy and intoxicated individuals not paying attention while navigating the sea of people. There is also a gentleman who is talking a bit too aggressively with his hands while holding a tiny glass of beer in one of them. He is very excited about his latest beer trade for something fancy and far out.  I suppose I can forgive him for ignoring my right not to get splashed with his beer and backwash simply because I had the misfortune of getting in line behind him. Beer trading is like warfare and tonight I am collateral damage. With nothing to add to the diatribe occurring in front of me, I wait patiently with some vague dark beer drying on my shirtsleeve.

I understand we are at a beer festival, so talking about beer makes a lot of sense, but I cannot hear one conversation that is not about beer. Think about how weird this is. There are thousands of people in a massive room and all of them are consuming alcohol but I can still only make out one single topic of conversation. Even my favorite thing gets boring if I only think and talk about it. It is at this moment that I begin to realize I hate beer festivals. There are more things to life.

I slowly inch my way to the front of several more lines while others stagger and stumble all about. I am bumped, elbowed, and have my feet stepped on more times than an awkward teen at their first middle school dance. Just more collateral damage.

The event is at the midpoint when I seek food. As a vegetarian, it turns out my only option is that hyperinflated soft pretzel. Perhaps the VIP ticket wouldn’t have been a waste if I could have afforded it. Fool me once…

…shame on me. When nature finally calls after another half an hour, I wander in the direction of the appropriate signage. At the end of a hallway, I am ushered outside the building and back into the cold night air to wait in yet another line. This time I queue up for a row of about 20 port-o-johns. This is by far the longest line of the night. I curse the VIPs with their indoor bathrooms. If I hadn’t paid my car insurance last month, I could be back to sampling beer already.

At this time I am essentially 100% sober. I am always careful at events like these to drink water between each sample and eat before and during. I prefer to remain in control of my faculties at all times.  Plus I like to drive home when it is over safe and sound. The same cannot be said for others. I finally enter the next free port-o-john and am greeted by a delightful melange of beer, vomit, and various bodily excretions. In the dim light, I do my best to touch nothing for obvious reasons. My business complete and having avoided touching all surfaces but the door handle, I step out back into the cold ready to resume my beer sampling.

Fate would have other plans, however, as my boots are immediately puked upon by a young, bearded fellow in a Monkish Brewing hoodie and Bissell Brothers* snapback trying to spin and re-enter the bathroom he just exited. Needless to say, my night has come to a decisive end at this point. I do my best to rinse my boots off with the water I have left in my $6 Dasani and mourn the loss of the last half of the event. I have simply lost the will to go back inside and drink more beer. The fun has been washed away like so much puke from my boots. So, I stalk off into the night to retrieve my car and go the hell home.

*I will never forget or forgive those two breweries for outfitting that walking Vomitorium.

I wish I could say I missed these types of beer-related events, but I don’t. I can find a better way to spend $65 or more, that much I know. I have had my fill of seeing strangers vomit in parking lots in Portland, Maine; listening to people complain about the event limiting the amount of beers they can drink before leaving to drive long distances through the winding Vermont roads; witnessing several hundred people celebrate the end of a festival by hurling their glass tasting cups into the air and letting them fall to the floor (and presumably onto people’s heads) at the DCU Center in Worcester; seeing two friends carrying an unconscious third member of their party towards a Green Line stop in Boston; watching couples get into screaming matches, witnessing fistfights over a taxi, observing women and men being groped, dodging corporate sponsors attempting to collect your personal information in exchange for some cheap freebies, succumbing to event venues gouging attendees remorselessly for food and water, and all manner of despicable human behavior I would not witness if I just stayed home.

For $65 I can buy some great beers to drink in my living room with friends, or after a hike at a state forest, or around a campfire,  or anywhere other than a crowded, overpriced, sweat-stained, vomit-splattered beer festival.