“What music scene?” said Brit of the band The Sea Wolves when asked how COVID-19 has affected Boston’s music scene. “It’s shut down until further notice.”

Like most bands across Massachusetts, The Sea Wolves has experienced a mass cancellation of all future shows, cutting off exposure and often times a paycheck.

Before the pandemic, the police shut down house shows, rent prices soared and the number of independent venues was steadily decreasing. The one consistency in Boston’s music scene (and all other scenes) is the audience showing up to see a show. But now, venues are empty, assuming that the gig is not already cancelled.

COVID-19 struck the world rapidly and unexpectedly, affecting people’s lives in a multitude of ways. As for Boston’s already struggling music scene, the pandemic has caused havoc.

Every role in the music scene is affected by the ongoing pandemic. Musicians, bookers, stagehands, live audio engineers and every other facet that comes together to create a live performance is now out of a job and out of a paycheck. Lilypad, The Tip, Dorchester Art Project, ONCE Ballroom and Cuisine en Locale have already shutdown, cancelling all live performances until further notice.

The virus continues to spread with no certainty that it will end any time soon. The recent updates have predicted that the pandemic will continue until August (or longer). In an era of skyrocketing rent prices, the musicians of Boston do not have the luxury to simply wait until the issue is resolved. As artists, fans and the city of Boston rush to find solutions to this problem while also combatting the coronavirus itself, the music scene in Boston suffers.

“I think all of us are hurting.” said B, a Boston booker, podcaster and merchandise designer, “I don’t think anyone saw this coming so big or so fast.”

Coachella, Glastonbury, Rage, Pearl Jam, SXSW and Madonna are some of the big names that have cancelled live performances due to COVID-19. The thousands of names that do not make the headlines are the bands and musicians with cancelled tours that are relying on the money these shows would have brought in to survive.

According to their Twitter, Heart Attack Man’s cancelled tour dates were going to pay for the van that has now broken down, leaving them stranded at the beginning of their travel. Their plan now is to sell enough merchandise to fix the van and return home, bringing back no income from the tour.

One solution that many artists have found is utilizing the internet for online “live shows”. Performances that happen in the artist’s house or in an empty venue or studio are broadcasted for fans sitting in their homes.

“It’s a win for everyone.” said Lauren of Composure Zine, “it means fans get to watch their favorite artists and bands still get to make some revenue, even if it’s a smaller amount. Everything helps.”

Musicians have already begun attempting to make this new medium even more creative, streaming their shows live on computer games. Citizen has performed on an online hardcore show hosted on a Minecraft server and countless bands are using Club Penguin as their new stage.

Unfortunately, this system still cuts out venues that are already struggling. When shows are livestreamed, artists make up a percentage of what they would have made in person and fans still see a show, but the venues they would otherwise perform at remain closed and make no money.

“So far, just a lot of fear,” said JJ Gonson, owner of Cuisine en Locale and ONCE Ballroom in Somerville to The Dig Boston. “I’m worried. I love ONCE and it can’t take much income loss.”

As for musicians that continue to perform, a challenging ethical dilemma is now added into their choice, with social media up in arms over the topic. Even if the people that are attending the concert seem healthy, they could be carriers with no symptoms. Attendees can then become unsuspecting vectors of COVID-19 that spread the virus to their friends and families.

Organizations have also begun stepping in to help to certain extents. The city of Boston has reinstated their Artist Relief fund, offering a meager $500 to artists struggling due to coronavirus.

However small, the city recognizes that the pandemic has affected musicians through cancelled tours, expected paychecks and bills from cancelled travel. The fund ends April 30, 2020 and accepts all applications for consideration. Any struggling artists can apply here.

Essex County Community Foundation has also set up a fund for local musicians in the Essex county. Along with the $400 dollars provided by the grant, the musicians information will be put on the website to increase their platform and hopefully make up for the lack of live performances with internet sales.

Bandcamp has made an attempt to support their artists by not taking the usual percentage out of purchases on the website on March 20, 2020. Instead, every purchase went directly to the artist’s account. This choice has also sparked internet attention, causing many people to choose today to purchase their favorite artists’ works. Other days for this have been announced on Bandcamp.com

“Finding ways to continue supporting artists in the coming months is now an urgent priority for anyone who cares about music and the artists who create it.” Said Ethan Diamond, Co-founder and CEO of Bandcamp.

$500 and one day of full sales is certainly no solution to a career dependent on frequent live performances. If anything, it is only the beginning of recuperating the losses from cancelled tours and recent performances. But these supportive actions show the government and organization’s abilities to support the music scene as the situation continues to worsen.

To many people in the music scene, the government is not doing nearly enough. Twitter especially has been up in arms over the fact that the federal government can inject $1.5 billion into the stock market with very poor results, but provide very little relatively to artists and those making the minimum wage.

“The government is going to have to take steps for people to keep shelter, and food on their plates.” said Chris Forsyth, musician and venue owner, to The Guardian, “They’re talking about bailing out the airlines, but regular people are going to need a bailout from this.”

Keeping with the normal, the largest support system for musicians during this time are the fans, according to every musician that I have spoken with.

Following updates, fans have crowded livestreams from Instagram to Club Penguin, purchased merchandise online and shared and retweeted their favorite bands. Social media has seen an influx of support for musicians during this time of crisis. Countless threads on Twitter have been dedicated to bands affected by COVID-19 and have become popular by people who enjoy listening to them.

“There’s already 10 to fifteen people living here,” says Camden Connor about Lowell’s The Tip, “It sucks when you can’t support artists even in the toughest of times, but we can always purchase and listen to their catalog on various artist’s platforms to get by.”

Camden’s role of booking shows at The Tip, which has cancelled all performances until a date TBD, is one of the many roles that take place behind the scenes in the local music scene. 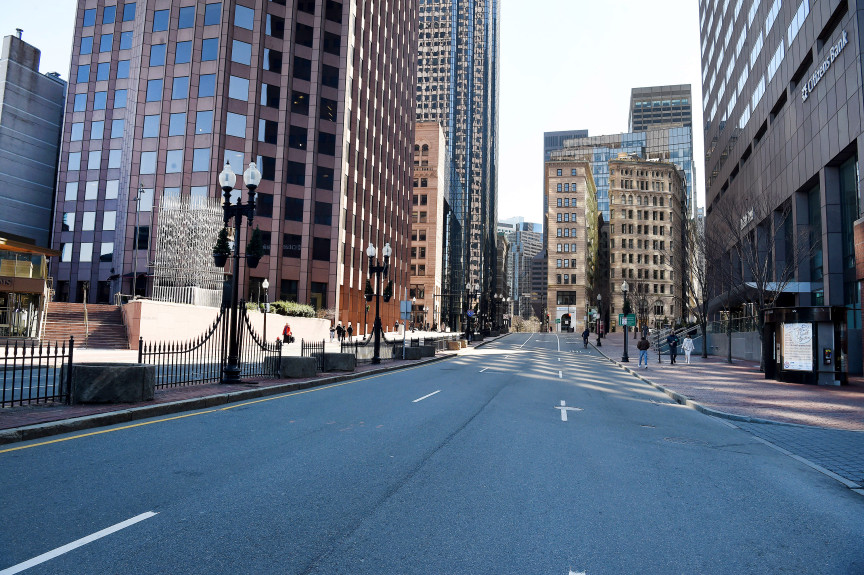 The additional challenge is that there are fewer ways for the public to help these behind-the-scene people. Sometimes, an audio engineer might get a small percentage of a record that they mixed and/or mastered, but you cannot purchase a stage hand’s album.

“It is hard for people like me who don’t really have an alternate form of income.” Says B, a Boston booker and designer, “People who book don’t really have merch to sell, and I can’t make money on merch design when all the bands are struggling themselves.”

It’s a dreary world in the Boston Music scene and a daunting feeling hangs over everyone involved. There is no set end date for COVID-19. No date that people can count down until.

The audience cannot show up anymore, but it is still there. Liking, retweeting, supporting, sharing, buying. There is no doubt that as this continues that artists and fans together will find more solutions to help to scene.