If you’re a JP frequenter, you may have stumbled upon Boston CyberArts Gallery in the Green St. MBTA station toward the end of the Orange Line. This marks my first visit to the space– and what a brilliant location! The gallery lies street-level directly adjacent to the T-station entrance—the floors even have the same brick tiling, giving it a more habitable vibe than your typical, sterile, white-walled gallery setting. I took great pleasure in seeing people stumble into the space on their daily commute, learning something new or just enjoying the visual splendors. I commend the gallery’s ambition to foster a more casual and intimately-integrated art/life relationship. In our high-stress era of world-issue bombardment, I feel it’s just what the doctor ordered…

I had the pleasure last weekend of experiencing Boston CyberArts’ World Memory: The Art of Data Visualization exhibition, showcasing artists working in a range of media-related practices (in 2D, 3D, video and animation), who specialize in navigating the “Big Data” field via artistic data visualization in order to “examine the planet’s natural and artificial structures, both physical and economic.” Big Data is a growing field that analyzes data sets that are too large or too complex to be dealt with by traditional data-processing– i.e., the bigger and more mysterious problems of our world, environmentally and socio-politically speaking. Thus, some exciting and important opportunities arise for investigative art-making. 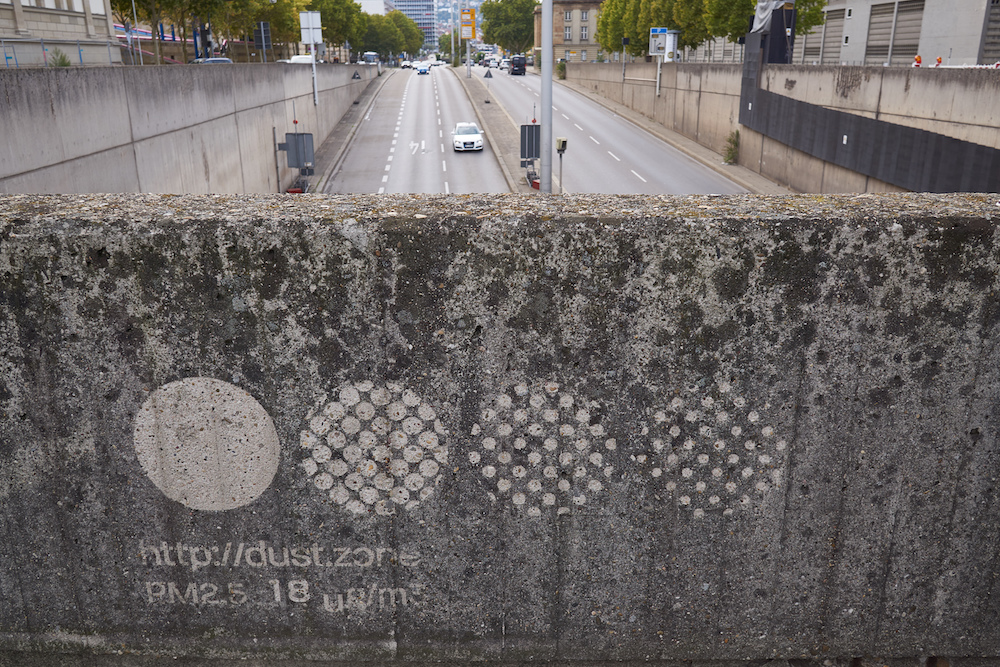 The first and most memorable work I encountered was dust.zone, a project by Dietmar Offenhuber. The piece brings physicality to the otherwise-imperceivable phenomenon of air pollution. The artist helps us to see the microscopic dust (PM2.5) of city air that accumulates on urban surfaces over time. Offenhuber specializes in these public art installations of “reverse graffiti,” also dubbed “clean advertising.” He first creates a stencil, then uses a water jet to eliminate the dirt from city walls to reveal the fresh, clean surface underneath, and with it, a hidden “utopia” of a pollution-free world– or at least a glimpse of one. In conversation with CyberArts’ Program Manager, Keaton Fox, she relayed to me that Offenhuber had originally planned to do a reverse graffiti display on the gravel outside of the gallery, but when he attempted to do so, the surface was not dirty enough to create the stencil impression. So in case you were wondering, the rumors are true: Boston, at least, is one of the cleanest cities in the country.

dust.zone is also uniquely time-based: these crisp patterns will fade over the coming months as dust reaccumulates. Locals and passers-by in Germany (the project is based throughout the city of Stuttgart) can visit the project website (http://dust.zone) and download a map of every graffiti installation Offenhuber has completed in the area thus far, and can track the fading of each graffiti as they please. Each graffiti also gives viewers the average PM2.5 level of their immediate location, adding an essential layer of “realness” to these abstract numbers. A term often used in air quality reports, PM2.5 refers to the ultra-tiny particulate matter (the microscopic dust) that comprises a major air pollutant. So tiny, their individual size is about 3% of the diameter of a single strand of hair! Their tiny size permits them to stay in the air the longest and they are dangerously easy to inhale. In dust.zone, Offenhuber draws our attention to both the urgency and futility of the situation at hand (air pollution mitigation), a predicament that Big Data visualizations tend to lay bare… We either make some sacrifices and change our post-industrialist, urbanized lifestyles, or await our coughing fate. I commend dust.zone for serving a meaningful public function, both as artwork and “advertisement,” promoting awareness and education on this everyday but otherwise invisible concern. 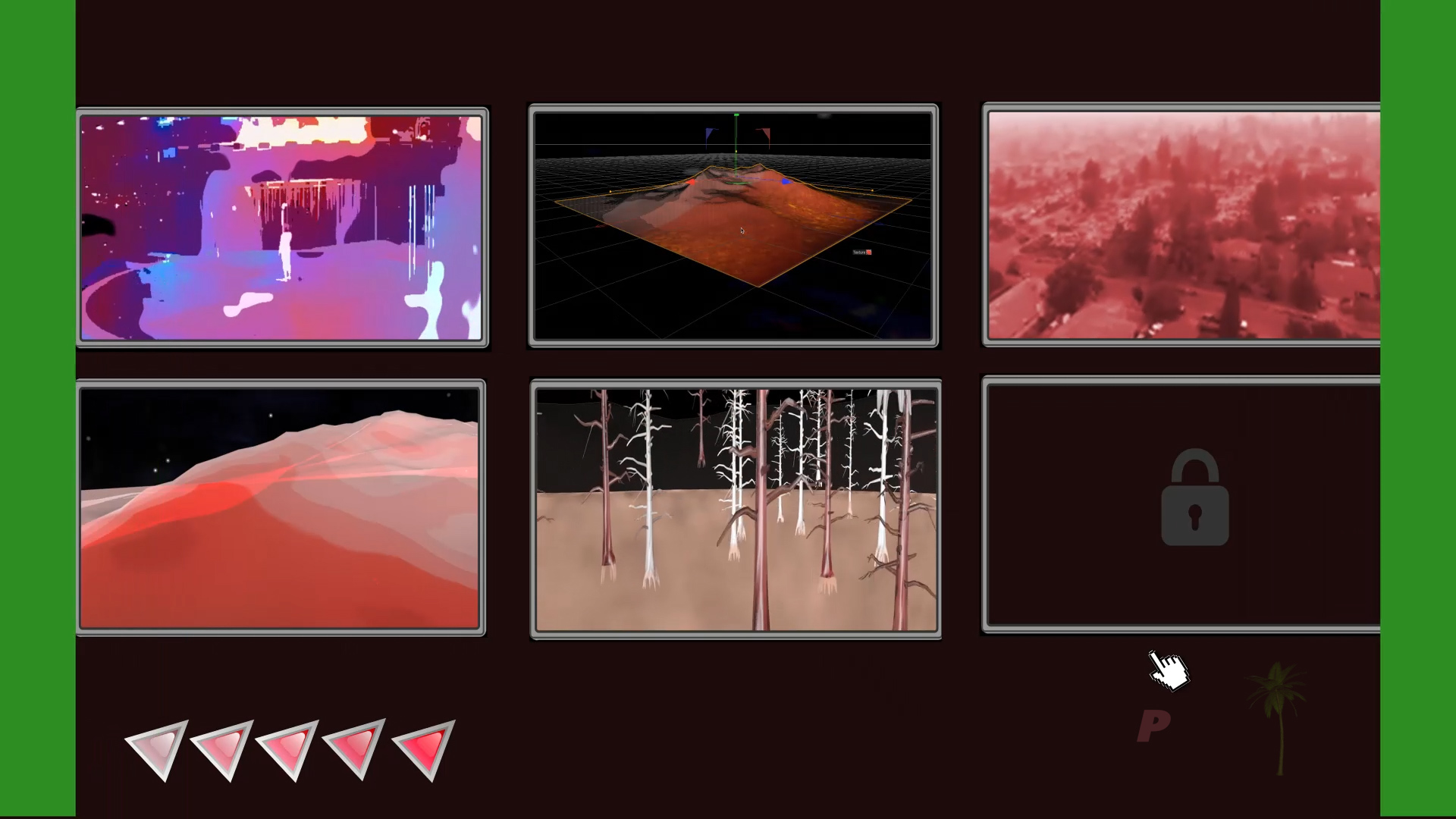 Steal Fire was the most captivating piece in the show for me for a variety of reasons. It is created from two visual sources: found-footage of recent forest fires in the Western U.S and the artist’s own digital animations. This duality of this piece’s media sources has the effect of grounding me in more worlds than one (I associate the one we know with the found-footage media), and overall the work mimicked a video game experience. Video game sound effects and a level system (Level 1, 2, etc.) are consistent throughout the piece, and it even opens on a screen with a menu of “worlds” (which a mouse-hand chooses) that the video travels between. The five red triangles in the lower left corner remind me of game “lives” (or play-turns), as well as red hazard signage. In the animation half, there is detachment to be felt from the reality of these wildfire tragedies— interestingly, fiery destruction is not depicted in this world whatsoever. Then again, there is perhaps equal detachment to be felt from the found footage sections: most utilize posterized or color-temperature “filters” and capture more dreamlike scenes, like a sweeping drone shot of a forest, or a dash-cam video of a car speeding down a forest road, dodging trails of fire in its path. The driver (not pictured) appears to be chasing the fire for the thrill of it, rather than trying to escape it.

Most of the data related to this project is demonstrated in the video’s narration, which sounds like it was generated by a robot-like vocoder and its language delivered in “essay format” (declaring statistics like “80% of wildfires start due to human activity.”). Yet some sentences are unexpectedly poetic: “Winds carry the thick smoke for miles, turning the day into night…” and “I’m surrounded by mother nature’s feeling.” It seems that both the allusions to video game experience and the retreats into poetry are designed to call attention to our practical “romanticization” of wildfires. We tend to soak up their drama, and while we may broadcast these events as they happen, rarely are we educating people with the facts of their origin or perpetuation, or advocating for a call to action after-the-fact, or simply bringing more awareness to the natural consequences of climate change overall (on top of its human triggers). 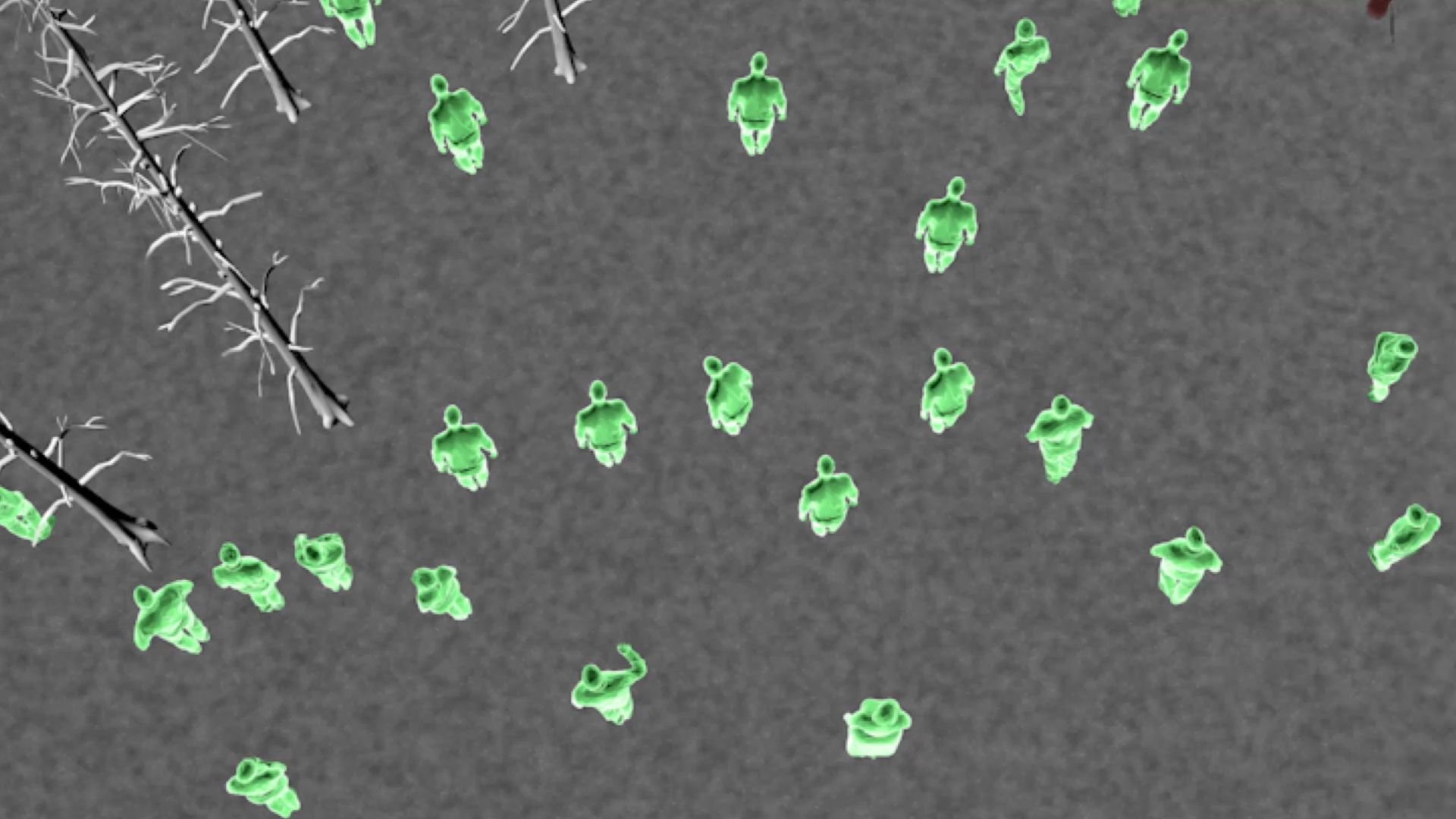 The digital animation sequences of Steal Fire have a beautiful, crystalline quality about them, particularly the trees and the green figures on the ground below them. At one point in the video there are crystalline, “icy” noises that mimic the sound of wind chimes. The trees look as though they are made of glass. As they become uprooted (as if an invisible hand has pluck them from the ground) and slowly turn in digital space, they linger in the air against a black-void sky and feel as though they might fall at any second. In this special case, the tree that falls in the forest would make a sound– a deafening shatter! (Here I reference the familiar philosophical question: If a tree falls in a forest and no one is around to hear it, does it make a sound?) As robust as we make them out to be, trees occupy a position of fragility in humanity’s hands, and they’re not so easily replaceable, either.

The end of the video loop confronts us with word “Paradise” and a palm tree’s silhouette. Is Beavers suggesting we flee to “paradise island” instead of confronting the problem at home? Although it’s also my understanding that trees of the palm tree family (Arecaceae) are particularly susceptible to fires. Perhaps the takeaway here is that there will be no paradise, no escape from reality, if we do not come to terms with our realities in the first place!

World Memory: The Art of Data Visualization, curated by W. Benjamin Bray and George Fifield, was on view through May 5th, 2019. However, you can still find all of the artworks & artists here on CyberArts’ website. Boston CyberArts Inc. is a non-profit arts organization, consistently rotating their gallery with cutting-edge exhibitions, showcasing nascent media practices and the intersections between technology and artmaking.