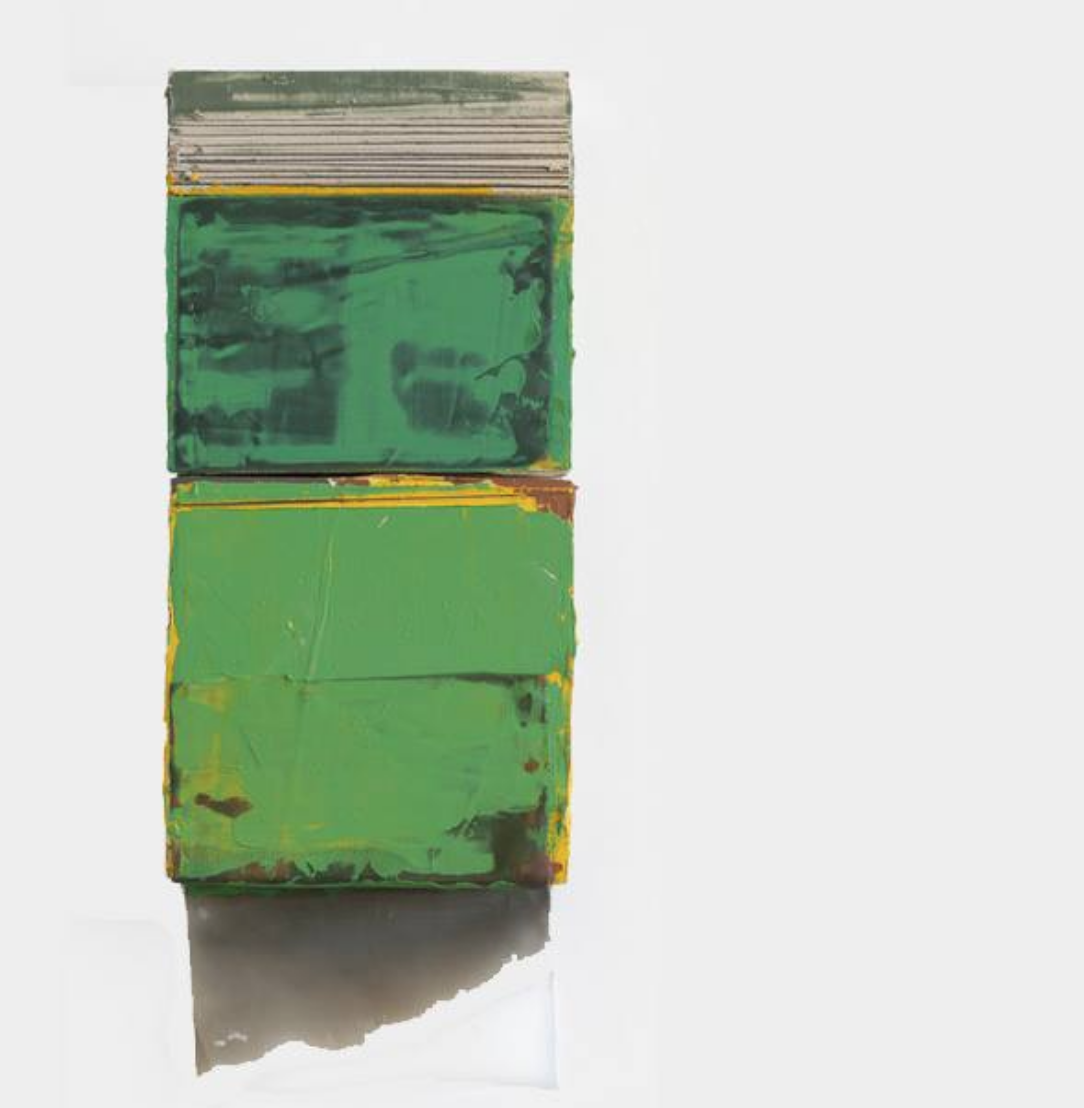 I visited Stand Together: Violence Transformed the day after the terrorist attack at the Tree of Life Synagogue, in Pittsburgh, PA, and earlier that week, the murder of two African-Americans in a Kroger grocery store in Jeffersontown, KY. So to read in the exhibit’s two-paragraph introduction that, “Stand Together…sheds light on the violence, bigotry, and social injustice that seems to at times permeate our current social order and bring to the forefront shared visions of a tolerant, diverse, just, and non-violent world,” was sobering yet afflicting.

Afterward, and before I began my viewing, I couldn’t help but wonder, how many more of these exhibits would we need to get the message across that violence tends to breed violence? And obviously, hate. Confusion. Hurt. Sometimes indifference. (And we often feel these feelings without even having to resort to violence). Good can arise from evil, as the Islamic Center of Pittsburgh announced the following Monday that the Muslim community had already raised over $70,000 for the Tree of Life victims and their surviving family members.

When will these pleas to “Increase the peace” reach the kind of individuals that devastatingly commit the heinous acts that were reported one after the other in the past week alone?

In the hallway of the Slater Concourse Gallery, at the Tufts University Art Galleries, I clearly wasn’t going to escape our sad American reality, considering the crux Stand Together: Violence Transformed. But just maybe the art within would ameliorate my hopeless feelings, even if just for half an hour.

This year’s featured artworks continue the larger Violence Transformed concept, a project that began in November 2006, its beginning rooted in a “community initiative of the Victims of the Violence Program of the Cambridge Health Alliance,” and with the goal of supporting the beloved notion that art can heal, explain, and express the effects of trauma and the process of unlearning detrimental mores and provoke positive, courageous change.

Curated by Carol Daynard and Mary Harvey, I was surprised by the brevity of the exhibit. It is small and there are only a few pieces. So, they had, or better yet, I had no choice but to let them hold me for longer than I usually schedule artwork viewing. I’m used to being in rooms that expand into other rooms with over fifty pieces to observe in most exhibits. Out of the tiny coterie, the following three I reflected upon. 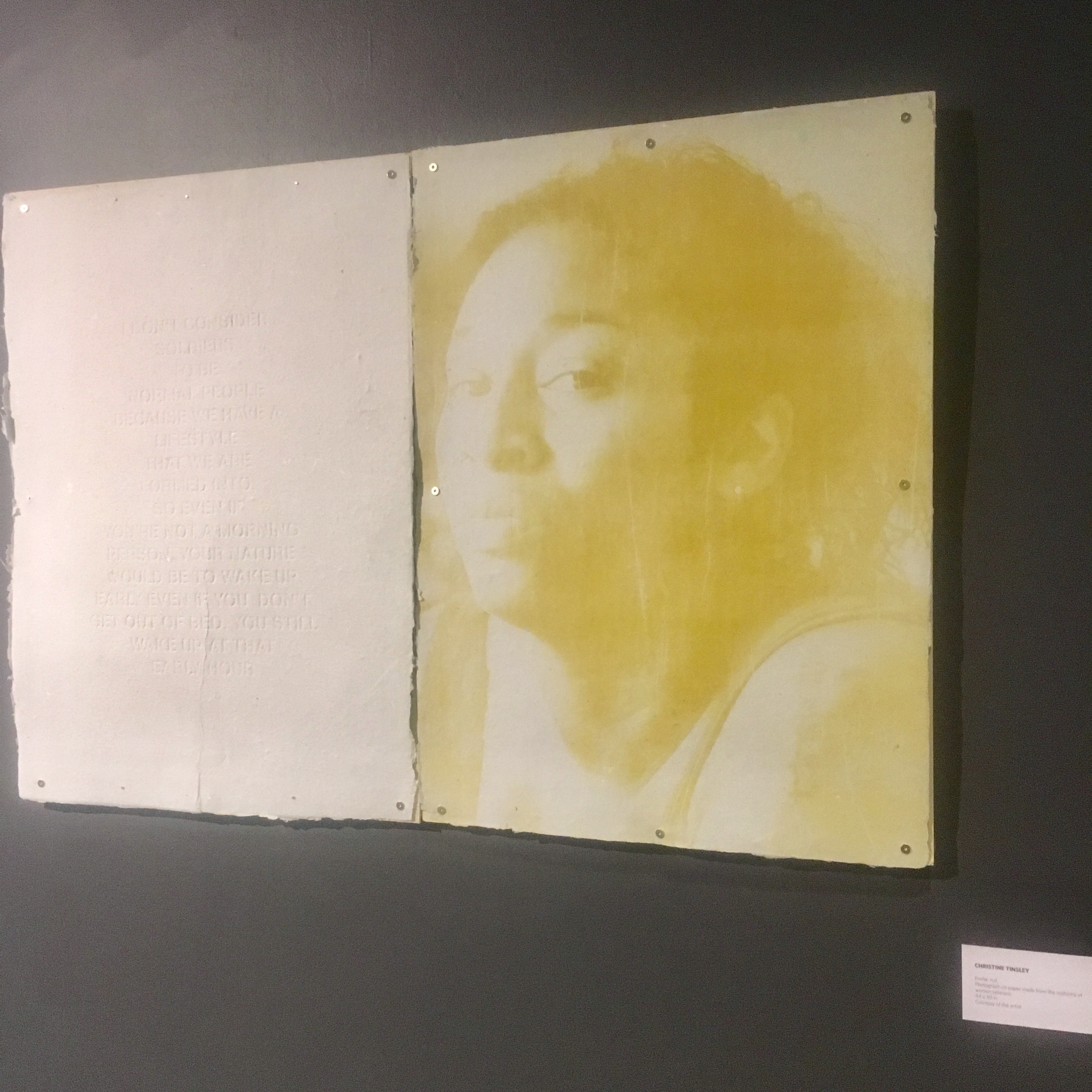 “Evolve” by Christine Tinsley, was the first to receive my gaze. Two 44×30 poster boards were displayed next to each other, as on the left, writing was embossed on a slightly off-white shade, and on the right, a fade-to-citrine picture of a woman with an expression that, if I had to give her a monologue, said: “I appreciate your time, but, remember, you have no idea.”

The writing read like an of-the-moment afterthought poem, describing what it is like to be a soldier and how whether on duty or not, once a soldier, always a soldier, for mentally and emotionally better or worse. I understood that the woman in the picture just wanted peace and time to continue balancing herself out. Tinsley created her artwork out of uniforms worn by women veterans, granting her creation as an undeniable tribute to said heroines in a field in which they are still outnumbered by their male counterparts. 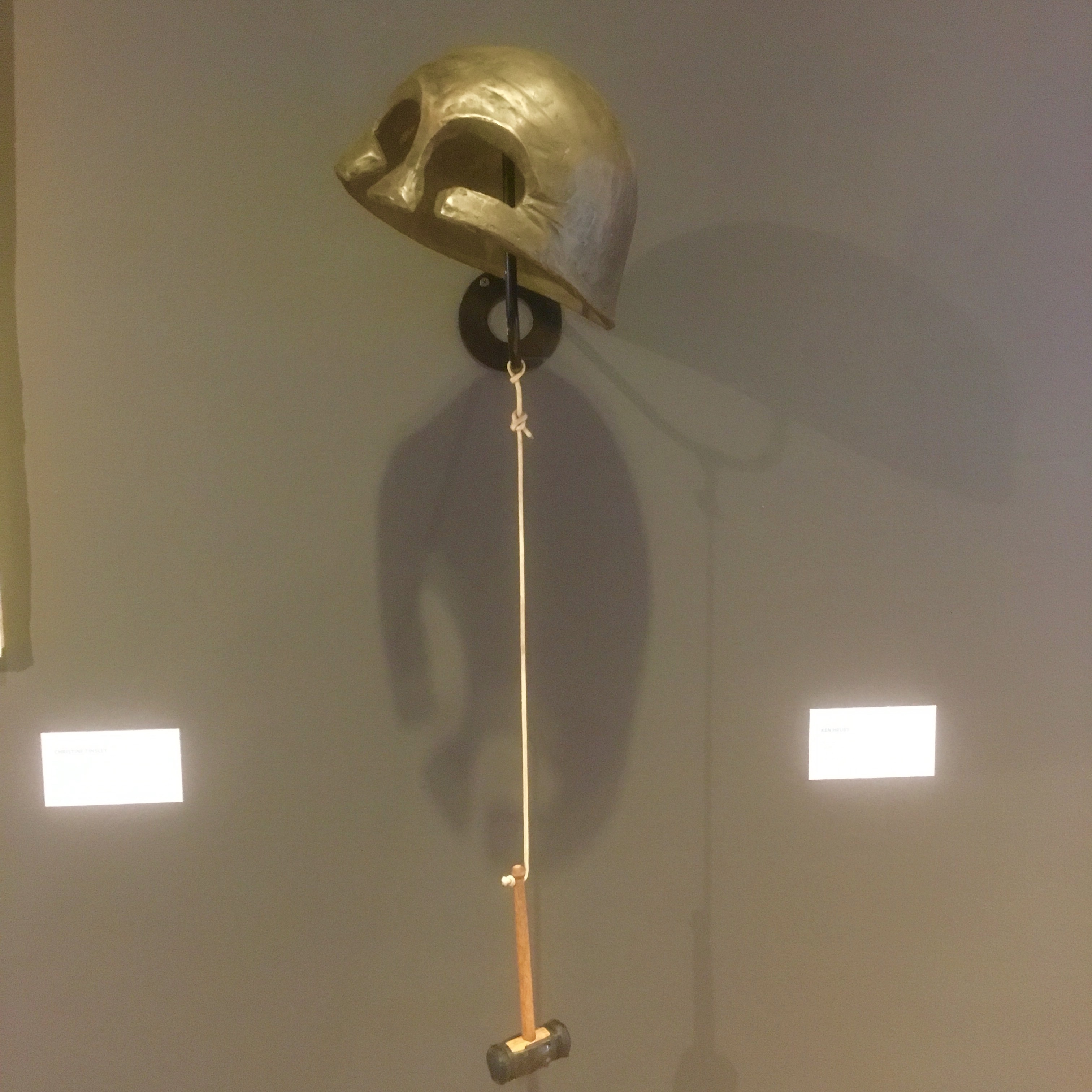 By “Evolve” is “Wounded Warrior”, a cast bronze helmet created in 2012 by Ken Hruby. I immediately thought of the poster for the 1987 film Full Metal Jacket due to the slightly tilted placement of the helmet. Something about the shade of bronze also translated as very vintage. Irrefutably, helmets are symbols of danger ahead and fearlessness on deck, but where the portending road ahead suddenly splits into two are the reasons why you’ve been placed in the face of danger in the first place. For the greater good? Based on unspeakable machinations?

Foisted by a simple kind of hook and line fixture, the helmet of this unknown wounded warrior also has what looked to be a mini hammer attached by a string on the bottom. Surprisingly, while I observed the helmet, the little hammer barely moved. 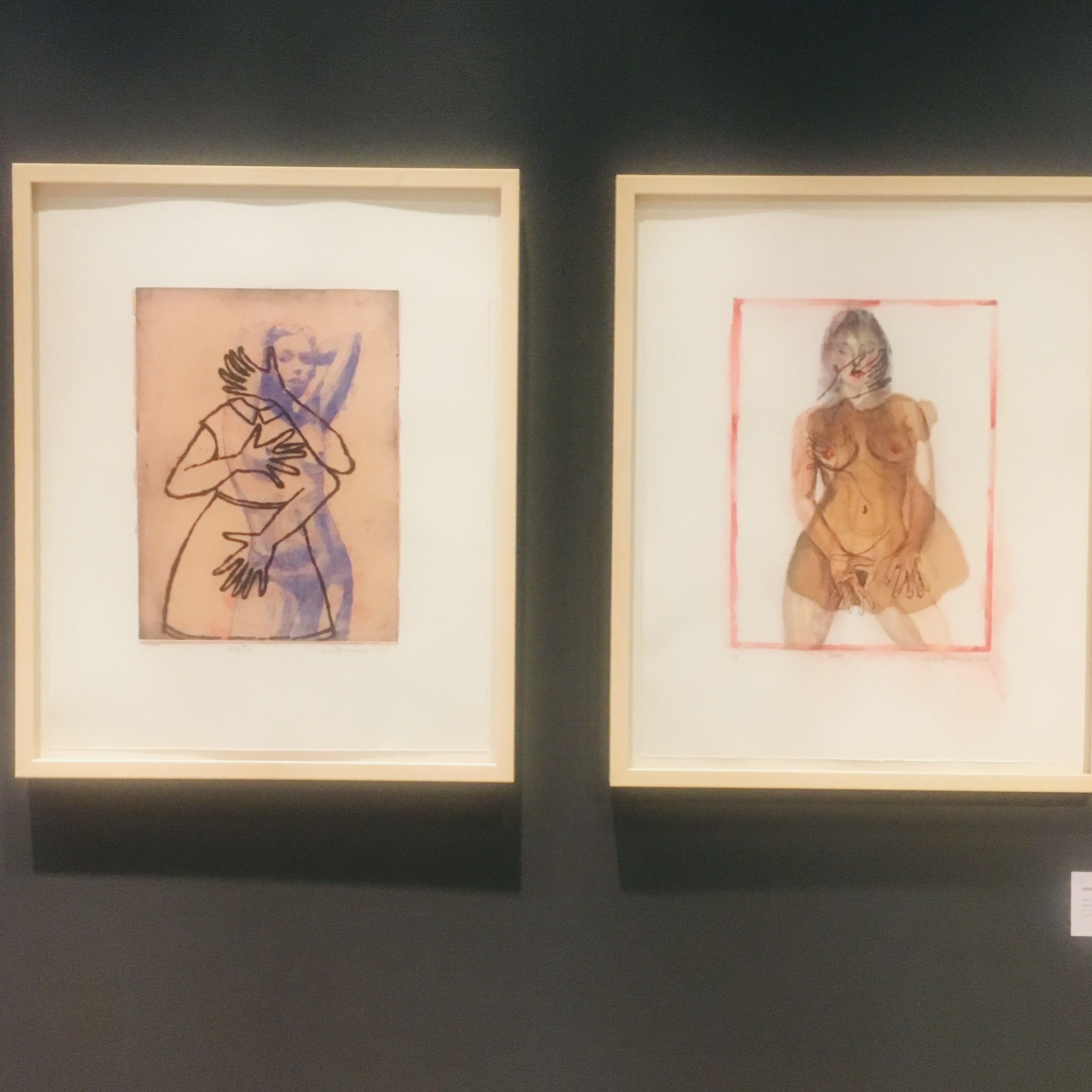 The third artwork consisted of two illustrations and is the most current. Created in 2018 by Lorie Hamermesh, she was not at all clandestine in her approach or deliveries for “#MeToo” and “Shhh.”

For the illustration on the left, the black ink outline of a headless woman, wearing a collared shirt dress, is trying to cover both her breast and lower half, and is superimposed by a faded blue water colored drawing of another person–seemingly a topless woman–slightly looking on, curiously and cautiously. Possibly she is representative of the now evanescent liberation of the headless woman, as a third arm and hand, also outlined in black ink, is covering where former’s mouth would be. The message is clear: this woman is being silenced and violated and despite her hand placements, she is justifiably frightened.

On the right of her, is an illustration of a woman, with more of a visage to claim. Her hair is soft black and shoulder length. Her eyes are closed and lips are red, and an overlay mimicking a sheer dress is superimposed on her.

This character was drawn as if she had more of a fighting chance against assault, with her hands covering her lower half, in a kind of calm defiance, though an unbidden hand is reaching from the side of her, and another unbidden hand is attempting to cover her red lips.

Through both works, what Hamermesh has done is exacerbate the argument that the way a woman dresses or “acts” determines whether misconduct or assault can occur. These are lies women have been told and likely, unfortunately, believed for a time. One woman is in a shirt dress, the other in a sheer dress, and both are fighting the same gendered war against them.

These artworks in Stand Together: Violence Transformed didn’t explicitly correlate to the news stories of the weekend. But, together, impressively and humanely showed just a few of the different types of violence out there and the stories they will inevitably bring. Whether it is through a woman veteran, the imagining of an unknown wearer of a battleground helmet, or everyday women combating normalized rape culture, we are all conduits that violence is a transformative experience with a lasting, unshakable impact.

Stand Together, Violence Transformed is on view at the Slater Concourse Gallery at Tufts University from September 29—November 4, 2018.