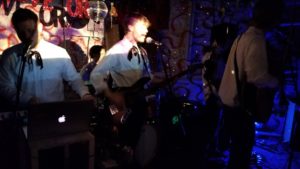 Really, I meant to write about the whole show. But life got in the way and I don’t remember much of the other bands, or even who they were to be honest – that’s okay, they’ve been around and I’m sure have had articles written about them. But the one band I still remember after procrastinating so long is The Tippecanoe. I saw them before they went on, all matching outfits, I knew it would be either terrible or great. When their intro of swirling noise swelled up and over us, my hopes rose.

This turned out to almost be a bait-and-switch, I expected a heavy psych or noise rock act to follow. But it was way more interesting than the scene I’m used to. They blasted into a twisted 1950s influenced style of rockabilly-influenced tunes. They had swinging, upbeat tunes, nostalgic singing, and instrumentation that was both forward and backward looking. The pacing of the set and the projections were so on point, I didn’t spend a second of it wondering why they made the choices they did, I just appreciated that they had made them and I was there to see it.

This was something so fresh to hear in a basement in Boston that I don’t want to spoil it by writing too many words. Just watch out for when they drop some recordings, it’s going to be great. Go and see them perform if you can, too.

Liked it? Take a second to support Clara Messina on Patreon!