Artist and curator AJ Rombach refers to her relationship with the artists in THERE IS NO BAND as that of a coven. “If you prescribe to the notion that practice and the fruits of those labors are transformative, then perhaps you will indulge that we are practicing magic.” The four women have joined together in THERE IS NO BAND and discovered an underlying symbology that connects their individual experiences with a secret lexicon of images and ideas. Rombach first conceived of this show over the summer, when she coincidentally reached out to her former BU Painting classmates about her idea for this project on the same day the three artists—Sarah Pater, S.E. Benezra, and Natessa Amin—were entering the Lacawac Artists’ Residency in the Poconos. From the beginning, Rombach has prioritized this rhythmic simultaneity, threading synchronicity and harmony through her curatorial process.

Many months of dedicated work later, THERE IS NO BAND held its opening reception on the evening of January 12th at the Distillery Gallery in the Seaport. Dozens of visitors crowded the main room of the gallery in support of Rombach, Amin, Benezra, and Pater, socializing, enjoying their drinks, and taking in the colorful and often dramatic pieces around the room.

The all-white remodeled warehouse gallery walls were overlaid with large layered sheets of vibrantly-dyed newsprint—Natessa Amin’s Wallpaper Installation (2019)—that poured from ceiling to floor in sections throughout the space. Between or on top of Amin’s Wallpaper Installation were artworks by Amin, Benezra, and Pater. The center of the room held two large platforms for Benezra and Amin’s 3-dimensional works—painted sculpture and pottery. Rombach included four installations of her Precarios (2018-19) around the gallery; white-painted drawers filled with found seaglass, seashells, pencil shavings, pottery, brick, and unlabeled scraps of feminist writing. The smaller second room of the gallery also featured Rombach’s 9-minute video, because the door is made of glass (2018) on loop. 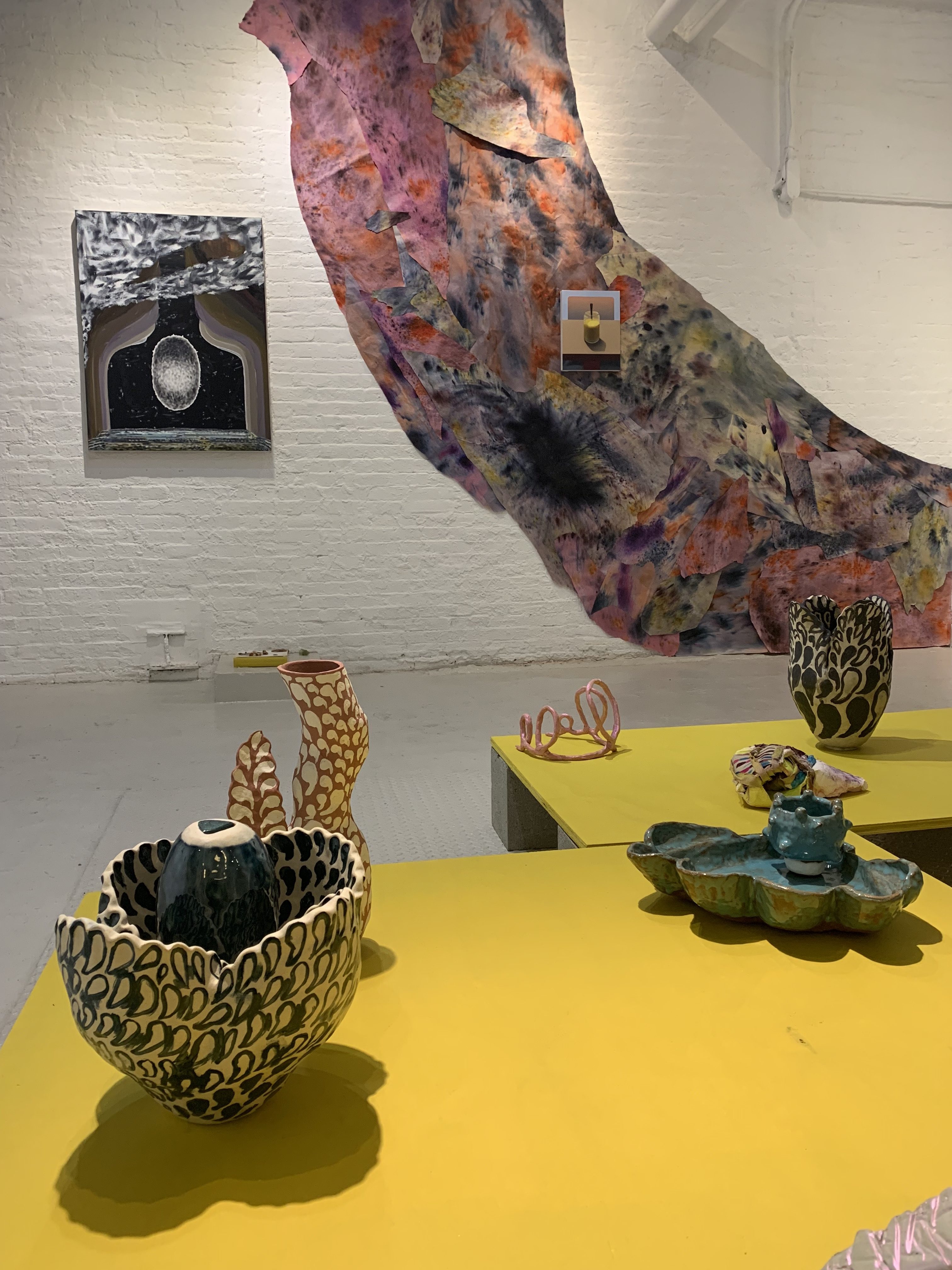 Just inside the entryway is a still-life by Sarah Pater called Breakfast (2018). It features two objects: one is clearly a spoon, and the other is (as confirmed by Pater herself) a metallic yogurt lid shaped into a vulva. While a crinkled yogurt lid might be an object out of Pater’s everyday experience, it was distorted in this painting. I heard it referred to as an oyster by one friend and a shiny metal vagina (“for breakfast?”) by another. I don’t think any of these estimates or our tendency to guess what we’re looking at are particularly discouraged by Pater’s painting style. Rather, I think her playful use of quotidian imagery to catch our brains working their gray-matter magic is a brilliant entry point into the overall objectives of THERE IS NO BAND.

According to Rombach, the show is “ontological in nature”—meaning that it seeks to explore what it means to be or to become. Past the entryway, I found many pieces that engaged less directly with tangible objects than Pater’s. Instead they abstracted shapes, colors, patterns, and textures—bringing our everyday being back to the purely sensory. For example, Natessa Amin’s Moon Rising (2018) features three possible moons, the frame of a cross-braced window, the familiar style of domestic wallpaper, the blurry lines of rainfall, and an ambiguous embroidered object in the corner. While I recognize these patterns, textures, and shapes, Amin has disrupted their arrangement, questioning the familiar ordering of an ontology.

Rombach addresses this sense of being directly: “With much of the work in the room rooting in reality via the recognizable yet also reaching towards the unnamable, the ‘whatness’ or essence of object is put into question. It is something very lucky, I think, to have some tangible object like a painting, sculpture, piece of writing or an entire room come into being because of decision and execution.”

Her video installation, because the door is made of glass (2018), focuses on this decision, the curatorial component of constructing a sense of being. In the video, Rombach collages somewhat mundane experiences from her last two years—calling hitting record “an event unto itself.” The video suggests that a set of kinetic patterns and existential questions compose our ordinary and cyclical lives, and that hitting record or elevating these moments to a point of significance does little to interrupt this sequence.

On-theme with being and becoming many of the pieces in THERE IS NO BAND feature symbols of creation and reproduction—such as S.E. Benezra’s Gestational Lensing (2018), an oil painting of a genderless human figure encompassing a large white egg. The egg reappears in her ceramic pieces Large Blue Focus Bowl with Egg Vase (2018) and Collaborative Egg (2018), which she shares with Natessa Amin. The many iterations of reproductive symbology in this show suggest that there may be multiple ways to address evolutionary narratives, but they’re unavoidable. 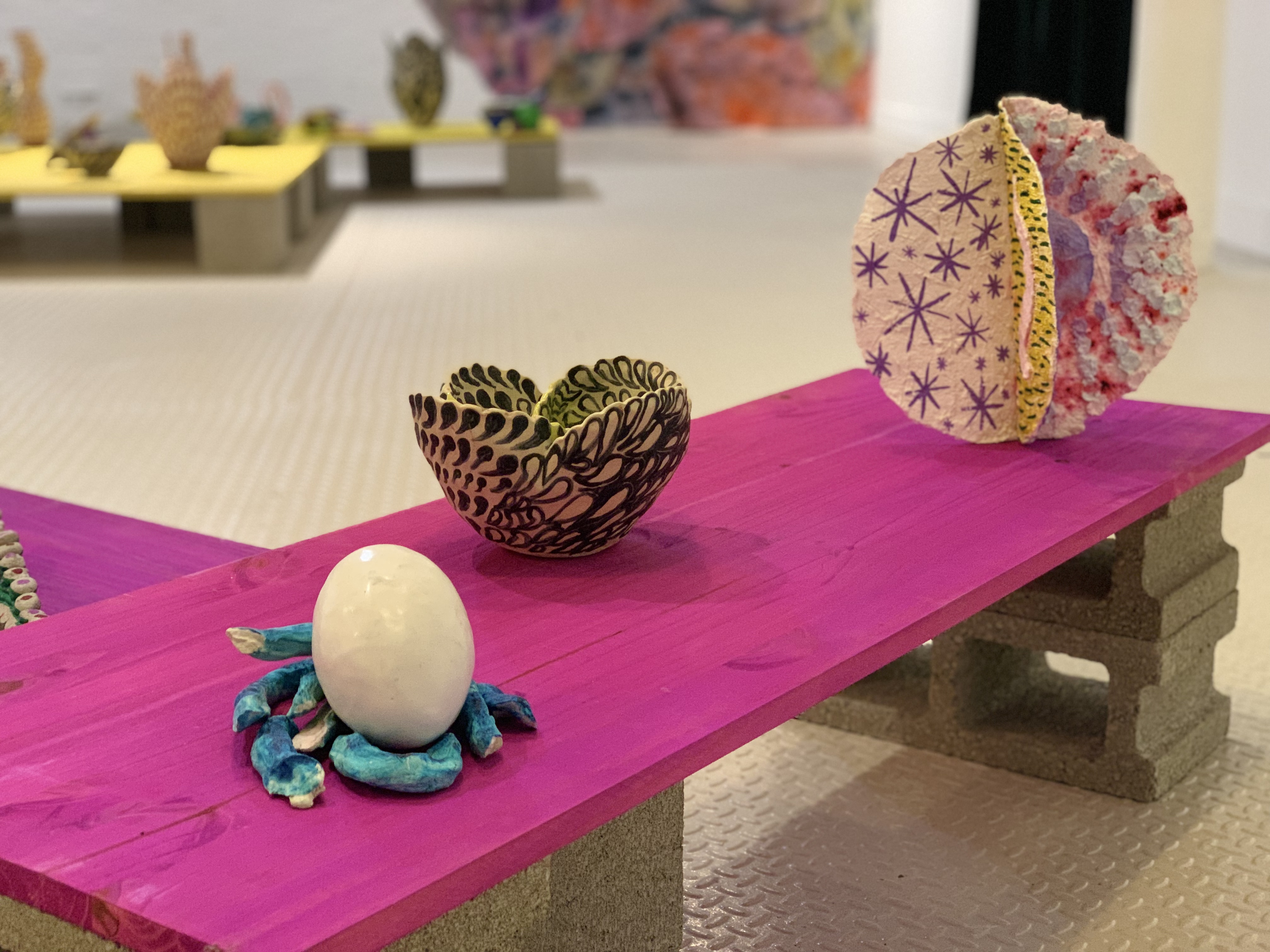 The show takes its name from a crucial scene in David Lynch’s film Mulholland Drive (2001) when the audience is told “No hay banda! There is no band! […] And yet! […] If we want to hear a clarinet, […] it is an illusion.” Ultimately, THERE IS NO BAND engages with the wish for bringing the illusion to life—the wish itself taking up tangible, stable space. In the gallery, the coven of artists showcases their work mid-magic, proving that their desire alone forms the shifting ground on which their senses of being expand.

THERE IS NO BAND will be  on view at the Distillery Gallery at 516 East Second Street, South Boston until February 10. More information on the exhibition can be found here.